Reclaiming Education: Hoping for Sanity at the SBOE

Will it take a miracle to oust the religious right bloc?

As the years of the Bush administration showed, it takes quite a lot of right-wing extremism to embarrass Republicans. However difficult that task, in the last few years the State Board of Education has apparently managed to accomplish it.

The seven-member bloc of religious and political fundamentalists on the board of 15 has been held only partially in check by an uneasy coalition of three moderate Republicans and five Democrats. The past few years have seen pitched battles over curriculum standards, including bitter fights over English language and literature, evolution vs. creationism, and in recent months, social studies – struggles that have once again made Texas a nationwide educational laughingstock. In this campaign, which directly includes Travis County in SBOE Districts 5 and 10 (see map), the battle lines seem to be forming not only along Dem­ocratic vs. Republican lines, but also what might be described as "Crazy vs. Not Crazy" – as what's left of the state GOP's moderate wing tries to reassert itself in these races.

District 5: A Touch of GOP Sanity and a Brace of Dems

South of the river, Travis County is among 12 counties in District 5, currently represented by staunch creationist and former state legislator Ken Mercer of San Antonio, running under the slogan, "family, faith, freedom." He faces a primary challenge from attorney Tim Tuggey, formerly chair of the board of San Antonio's VIA mass transit system and now an Austinite and managing partner of his law firm. Tuggey says he's "adamantly committed to public schooling," and his wife is an Austin Independent School District teacher. The major issue for him is the management of the Permanent School Fund, which at the end of fiscal year 2009 was worth $22.6 billion and that year provided $716.5 million to public education. "It alarmed me when in late July ... Mr. Mercer and just eight of 15 members of the board voted to fire the incumbent managers [and] hire a lower-rated firm ... that was apparently the preference of [Democratic Board Member] Rick Agosto. Now, on the campaign trail, Mr. Mercer's out there praising the performance of the fund last year, something to the effect of, 'We're among the best in the state and got a 31 percent return.' Okay, you just fired the manager that yielded that return. Why is that?"

Mercer did not return a call requesting an interview, but his campaign website dismisses Tuggey as not a real conservative and even a contributor to "liberal" Democratic candidates. Tuggey insists that he is a "true conservative" and shares many of Mercer's views, but "in a biology class, you teach evolution." Mercer never specifically called for evolution's ouster, but he published an op-ed arguing against the theory using long-discredited arguments attacking the "weaknesses" of evolutionary theory – the latest gambit of the advocates for creationism.

Four Democrats want Mercer's job: Texas State English professor Rebecca Bell-Metereau, Seguin mental health case manager Robert Bohmfalk, Canyon Lake psychologist and former Lege candidate Daniel Boone, and machine operator Josiah James Ingalls, known to Austinites from his failed mayoral bid last year. In the crowded Democratic field, Boone says that "some on the board would like to prepare our children for the 19th century, not the 21st. ... The GOP has some good people, but they don't have the right message and they don't have a credible candidate." Boone says as a clinical psychologist he "worked with youths facing the problems of the educational system." 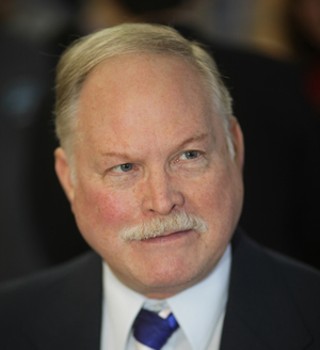 Bohmfalk says Mercer and his allies "put their own political agenda in front of kids." The former Methodist minister says, "I believe in separation of church and state." He says the SBOE's support of abstinence-only sex education has been a failure and that reducing teen pregnancy and the dropout rate would be his top priorities.

Ingalls says he has personal experience with the failings of the educational system, having been placed into programs for students with special needs when he was in school. He complains that children with physical needs are lumped together with those who have mental disabilities, posing problems for both groups. During his campaign for mayor, he criticized his own home-schooling for providing him an inadequate education he had to overcome on his own.

Of the four Democratic candidates, the only one with both education credentials and a broad-based campaign is Bell-Meter­eau. The former Fulbright scholar has been an educator for 28 years in the Peace Corps and at Texas State, where she is a professor in the English department. "The incumbent doesn't know academics," Bell-Metereau complains. "He has opinions, but he doesn't know education." In setting curriculum guidelines, "we need a reasonable process that looks at data and best practices and takes the advice of scholars, not people who are his friends or who agree with what he believes." (The SBOE conservatives have been criticized for hiring self-proclaimed "experts" for curriculum review, rather than relying on trained academic professionals.)

The large SBOE districts – more than twice the size of state Senate districts – require substantial amounts of cash and campaign expertise for any shot at victory in November. The other three Democratic challengers are running DIY campaigns; Bell-Metereau's is being run by veteran Austin campaign consultant Alfred Stanley, and she has been steadily raising money – both of which should give her an advantage in the general election.

North of the Colorado River, Travis County falls among the 16 counties in District 10, represented the past four years by Richmond's Cynthia Dunbar, who home-schools her own children and wrote a book labeling public education "a subtly deceptive tool of perversion." She also described newly elected Barack Obama as a terrorist sympathizer plotting to declare martial law. She's stepping down after a single term and has endorsed as her successor intellectual property attorney Brian Russell, a member of the state GOP executive committee. Russell (whose children are also home-schooled) must defeat one current and one former education professional in the GOP primary, both of whom hold doctoral degrees in education: McNeil High teacher Rebecca Osborne and George­town's Marsha Farney.

"When I realized the SBOE's influence, I wanted someone on the board with education experience," said Farney. She said she doesn't question Dunbar's right to home-school her children but notes her own years as an elementary teacher and counselor and her doctorate in curriculum: "I think your perspective is enhanced if you've had that experience." As for the culture wars, Farney says: "My faith is not shaken by evolution. ... It should be taught as a theory."

"I'm running because I believe there's a disconnect between the Board of Education and the classroom," says Osborne. "I'm running to bring the voice of an educator to the board." Osborne began her campaign in 2008, before Dunbar's decision to not seek re-election. But she carefully avoids characterizing what would have been a challenge to the incumbent as a criticism of Dunbar's record. "My voice is a different voice than hers," she says. "My voice is the voice of an educator." Asked if she was the moderate alternative to the fundamentalist bloc, she said, "I'm not going to get into labels." On her website, she states that, "Board appointed content experts should have backgrounds in the field of study for which they are appointed. I will recognize and respect their expertise." But asked if that was a criticism of board-appointed "experts" with dubious academic credentials, she would only say that appointing true experts "is what I plan to do. I have made a real point since I began this race to talk about what I have to offer, not to talk about current board members."

Russell did not return a phone call, but his site quickly establishes where he's coming from in the first sentence: "I am a pro-life, pro-family conservative." He spends the bulk of his front page promoting his track record as a state Republican Party activist and uses the word "conservative" no less than eight times. On science issues, he boasts proudly that he wants students "to think for themselves and ask questions about scientific theories like evolution and man-made global warming."

In the Demo­crat­ic primary, former Texas Education Agency employee Judy Jennings of Austin, who works as an educational consultant and has a doctorate of her own, is unopposed and is already looking forward to November. In her work with the Texas Education Agency she was a curriculum specialist, and during that tenure earned a doctorate in education. "About a year ago I started reading about Dunbar and said, 'This can't be,'" Jennings says. Of her potential opponents, Jennings singles out Russell as her chief concern because his views are similar to Dunbar's.

Which of the three Republicans will face Jennings in November is a tough call. Does the religious right still control the Republican primary, or are moderates ready to take back their party? Russell would appear to have a lock on the former, but Osborne boasts an impressive list of endorsers that would seem to establish her with the latter, including current SBOE Republican Pat Hardy and former District 5 member Dan Montgomery – who was purged from the board by Mercer.