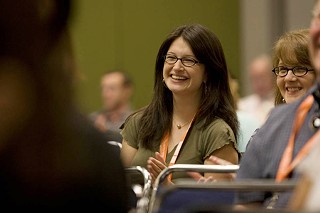 So what exactly is a Netroots Nation? "It's a gathering of online progressive activists, bloggers, and readers," says Josh Orton, political director for next weekend's blogging and online activist convention. "Everyone from elected politicians to high-traffic bloggers to people who go online to get their news."

It began in June 2006 as YearlyKos, where members of the online community surrounding the Daily Kos liberal blog met in Las Vegas. With 1,200 attendees in its first year, including major political figures like Democratic National Convention Chair Howard Dean and Ambassador Joe Wilson, a second conference was held in Chicago in August 2007. For 2008, as what Orton called "a happy outgrowth of the success of the first two years," organizers BloggerPower changed the name and extended the invitation to the larger blogosphere.

"The Internet's been great for politics because it's lowered the bar to entry," said Orton. But there's a downside to building an online progressive and activist community. "The one thing missing is that they rarely if ever get to see each other," he said, and that's where this convention comes in. "It gives them an opportunity to meet face to face. It's priceless."

But Nevada in June, Illinois in August, and now Central Texas in mid-July? Does Orton think bloggers like sweating? The choice of Austin has a lot to do with the strength of online activism in the area. "The local progressive community reached out to us as much as we reached out to them," said Orton. The conference has worked with the Texas Progressive Alliance, Demo­cra­cy for Texas, Capitol Annex, and especially Burnt Orange Report, which he described as "real helpful in acting as a sounding board."

"We're doing everything we can to reach out to the progressive community in Texas to shake the trees," said Orton. "This is the first year when the convention is really integrated into the community. We're encouraging people to go out beyond the Convention Center." What he hopes most of all is that conference attendees learn from the "robust community organizing" that characterizes Austin's political scene and how online activism complements, rather than replaces, more traditional protesters' tools like phone trees and demos. "We want people to take away the idea that organization is local, and you don't have to be in New York or on the front page of a major blog to do it."