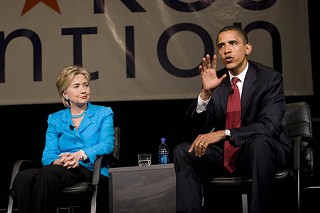 Clinton and Obama at the 2007 YearlyKos Convention (Photo by Mona T. Brooks)


Netroots Nation, the third annual gathering of liberals and progressives from the blogosphere and beyond, meets July 17-20 at the Austin Convention Center. In addition to panels and discussion groups, the convention includes a progressive film series, a career fair, organizing sessions, and more. To register, or for panel and speaker lists, plus lodging and travel information, visit www.netrootsnation.org.

That hoary charge of a "liberal media"? The right playing the refs? Elevating "balance" over all else? This panel – featuring A-list bloggers Duncan "Atrios" Black and "Digby" Parton, plus New York Times columnist Paul Krugman and Nixonland author Rick Perlstein – delves into the media phobia of offending conservatives.

While the media focuses on "the surge," this panel takes a holistic look at Iraq in geopolitical terms for the Middle East, the U.S., and the world. Young turks of the blogosphere Matt Yglesias and Spencer Ackerman are joined by the National Security Network's Ilan Goldenberg and A.J. Rossmiller.

Your Government Failed You: Breaking the Cycle of National Security Disasters

Taking its title from his famous mea culpa (and newest book), security expert Richard Clarke speaks with Rand Beers (who left the Bush administration to join the John Kerry campaign) on restoring responsible terrorism and disaster policy to the White House.

This panel examines media complicity in the run-up to war in Iraq – and what it could mean for action in Iran. Featuring author Mark Danner, Editor and Publish­er Editor Greg Mitchell, and The Nation's Ari Melber.

Guantanamo, Habeas Corpus, Torture and Military Contractors: The Roadmap to Accountability in the First 100 Days

Of all the minefields a President Obama will navigate, these Iraq war issues are the most explosive. Speakers include Jameel Jaffer, director of the Amer­ican Civil Liberties Union's National Security Project, and Jeremy Scahill, author of Blackwater: The Rise of the World's Most Powerful Mercenary Army.

Several Lone Star bloggers and politicos are part of Netroots Nation. Below, a brief sampling.

Blogs as the Ethics Watchdog

Taking the Populist Uprising to the States