Warning, numbers may be smaller than they appear: the complicated flowchart of cash in the state's General Revenue budget. (Budget-building numbers have changed since the figures seen here were published, in January 2007, for the beginning of the last legislative session.)

It's an election year, so Texas Republicans are talking property-tax cuts and how to pay for them. In a May 1 issues paper on his website, House Speaker Tom Craddick wrote, "When the Legislature convenes in January 2009, some people estimate that we may enjoy a $15 billion surplus even after passing the largest property tax cut in Texas history." He had already appointed a Select Committee on Property Tax Relief and Appraisal Reform, intended to deliver additional property tax cuts, and Gov. Rick Perry has backed that call. What's the harm? After all, there's $15 billion to spare.

That's news to the comptroller's office. Last November, Comptroller Susan Combs issued her Certification Revenue Estimate for the 2008-2009 biennial budget: Her estimate of what will be left over from General Revenue expenditure was $10.7 billion, and most of that is already allocated. Three billion dollars goes for – guess what? – the 2010-11 school property-tax rebate. Another $5.7 billion is earmarked for the Economic Stabilization (aka "Rainy Day") Fund, but that was established by the 70th Legislature specifically to give the state some savings, and can only be disbursed via a supermajority (two-thirds) legislative vote. The actual surplus is the General Revenue-related ending balance – the gap between tax raised and tax allocated – which Combs puts at a relatively measly $2 billion (of a total General Revenue biennial budget of $85 billion). That's still only an estimate, which Combs' spokesman Allen Spelce called "a squishy number." In her cover letter accompanying the estimate, Combs warned that, while fiscal year 2007 was strong, the Texas economy is not expected to perform as strongly in 2008.

So who are the "some people" saying there's $15 billion to spare? Tom Craddick's staff. "[Combs'] $10.7 billion is what she thinks the estimate is today, and the $15 billion is what we think it may be at the beginning of next session," said Craddick spokeswoman Alexis DeLee.

Against this background, even fiscal conservatives are urging caution against rushing into further handouts. Talmadge Heflin, director of the Texas Public Policy Foundation's Center for Fiscal Policy and former chair of the House Appropriations Committee – from whence he oversaw some brutal budget cuts – called covering the existing property-tax reduction and the Rainy Day Fund "two iron-clad priorities."

As for estimated tax income, there are new and untested variables. Revenue from the $1 cigarette tax has yet to be calculated. Sales-tax revenue, after rising for decades, fell 1.8% in April from 2007 levels. The biggest issue may be the revised franchise tax, which Spelce calls a "question mark." Spearheaded by Gov. Rick Perry over the last two legislative sessions, it was intended to shift emphasis from property to business taxes and pay for the property-tax cut. But confusion about which businesses are actually liable to pay is so rife that Combs has pushed back the filing date a month, to June 16. Sen. Dan Patrick, R-Houston, sent a letter to Combs on April 25 asking her to push that deadline back to Oct. 15. "Many CPAs still do not understand all of the rules and regulations regarding this tax," he wrote.

Now a hunk of the business community has come out against the tax, claiming it damages small firms. The National Federation of Independent Business has joined with several state-level groups representing small businesses and independent contractors to form the Texas Business Tax Coalition. They want exemptions and alterations that will relieve pressure on businesses grossing less than $1 million or running at a loss. The coalition claims that the drop in property taxes for the majority of its members is more than negated by the rise in franchise taxes. "This is an entrepreneurial killer," said Rod Steinbrook of member body the Texas Courier & Logistics Association.

Rep. Garnet Coleman, D-Houston, describes Craddick's economic sleight of hand as a wasted opportunity. "The argument for cutting the budget for anything is that there isn't any money," he said. "Well, clearly there's money" (in Craddick's judgment).

So why raise this $15 billion (or $10.7 billion or $2 billion) now? Coleman sees it as a pre-election stunt. "What they want to run on is tax cuts. That's why Tom Crad­dick has established the [select committee]," he said. Craddick announced its 13 members on April 23 (eight Republicans and five Democrats, including Craddick Ds Tracy King and Kino Flores) to continue reform of the appraisal system. Cole­man counters that the biggest beneficiaries of property-tax reforms thus far are major commercial landowners. If Craddick were serious about benefiting homeowners, Coleman said, he would expand the homestead exemption.

Coleman also echoed the National Federation of Independent Business' fears that property-tax cuts are a shell game, adding that families of all incomes face hidden taxes, like dramatic hikes in college tuition, while commercial property owners get tax cuts. "When you talk about people's access to education, you're talking about this state's ability to prosper in the future," he said. "We have a good business climate, but we won't have a workforce that can staff those businesses." 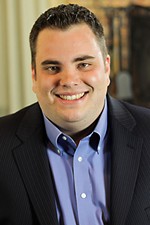