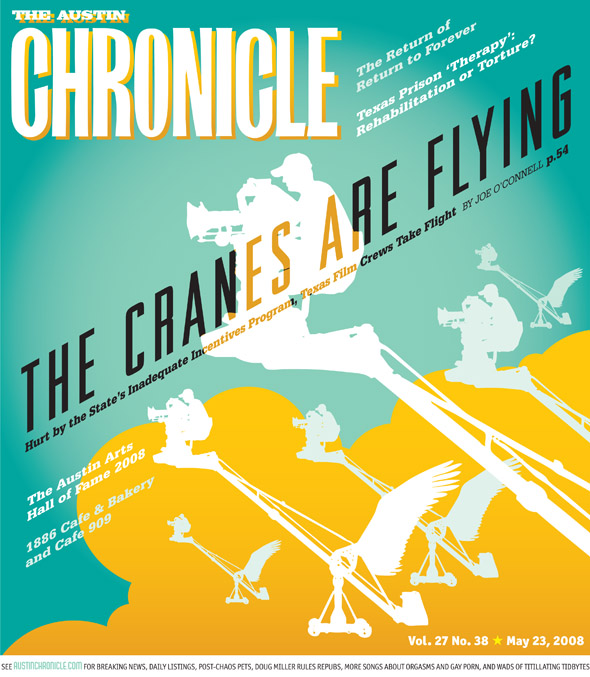 pdf
ON THE COVER:
Abandoning the Nest
news

@ Newsdesk: Some Real Losses at the Lege

Oklahoma Is OK for Dan Patrick

TV Storm Surge ... and the Demanding Life of a 'Statesman' Editor

What would we do without TV during a storm?

Approaching Memorial Day, something else to consider

As Kim makes her exit, Austin heeds the heavens' wrath Pick Your Own Berries

Enjoy the extravagance of berries without the supermarket price

Sarah's Party, a benefit for Sarah Rowland of Hairston Creek Farm, will feature locally produced foods and beverages and a silent auction

Cafe 909 can compete on a national level

Who says the guitar is sexier than bass? Not Return to Forever's Stanley Clarke, and hopefully not Beyoncé either.

The United States of Savings

How Texas' incentives stack up

Baby Cakes and the Professor Brothers dive into Adult Swim

MonkeyWrench Celebrates May of '68

Her hotness Heather Graham makes a movie in town

The world's favorite whip-wielding archaeologist gets a new DVD reissue

The Chronicles of Narnia: Prince Caspian

The Pevensie kids are summoned back to Narnia for yet another mystical adventure based on C.S. Lewis' series of fantasy books.

This tale of an unapologetically promiscuous New Yorker settles for the easy trifles of romantic comedy.

Indiana Jones and the Kingdom of the Crystal Skull

If you're looking for escape, then the fourth installment in the beloved cliff-hanging archaeological-adventure franchise should fit the bill.

The 2008 class of the Austin Arts Hall of Fame

The Love Sonatas: Take five (and put 'em all on stage)

The HBMG Foundation revs up Manuel Zarate's cycle of five plays, staging them all in repertory over two weeks

After the final punch line in this year's contest was delivered, the last laugh belonged to Eric Krug

When Something Wonderful Ends

Cultural touchstones for the gray spaces

Science is an endeavor, an investigation, a body of knowledge, but it is also a behavior

At the pick-your-own Blueberry Palace outside Nacogdoches, it's one in the bucket and one in your mouth

The Austin Outlaws' Shadana Hurd averages 13 yards per carry, but that doesn't exclude her playing a second position on the field

Neil Young and model trains, beans and Cokes for the Beatles, and more

My Credit Card Company Is Suing Me: What Can Really Happen?

BY PAT FITZGERALD AND LUKE ELLIS