A thief swiped this iron statue of an airplane, which had functioned as an eye-catching mailbox
Photo provided by Todd Campbell

Normally, if someone steals a mailbox, it's a nuisance. But when the mailbox in question is a unique piece of functional art, a 4-foot-tall statue of an airplane by a local sculptor, it becomes a loss to the community.

With a fan blade for a propeller and a red flag on its tail, the weathered iron statue/mailbox was, for eight years, on the front lawn of artist duo Todd Campbell and Jennifer Chenoweth at their East Austin home at the corner of Waller and East Second. Then, sometime on the night of Oct. 1, it disappeared.

"It was first and foremost a statue that had a function as well," said Campbell. In 1999, when the pair first moved into the house, the Eastside was not the artistic hub it has become, and the building needed a lot of renovation. Campbell bought the mailbox for Chenoweth from local artist and blacksmith Barry George as a birthday present. "It was the first improvement we did to the house," Chenoweth said. 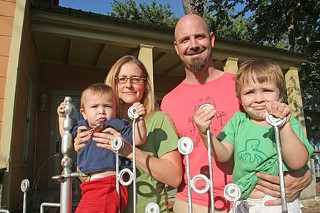 Jennifer Chenoweth and Todd Campbell, shown with kids Roland and Wallace, at their East Austin home (Photo by Jana Birchum)

There's more than just sentimental value attached. Calling George local means he lives about a block away from where the piece stood. His depictions of birds and flowers, made from found metal, adorn several houses in the neighborhood, but his work has found a larger audience. His interactive piece Do It Yourself Icarus was displayed in City Hall earlier this year. The mailbox had become a local landmark, drawing so much attention that George had been commissioned to produce several similar pieces by friends of the couple. Now the original has disappeared without a trace.

Campbell doubted this was just some kids playing a prank, since the statue was welded to a reused airplane landing strut and weighed about 175 pounds. "They must have used a truck," he said. "This was premeditated." The couple is offering a no-questions-asked reward for the return of their airplane. "It's part of our personal collection, and we want it back," Campbell said.