Does It Really Pay to Work in Austin?

Workers earn less in Austin than other major cities

Tweet
print
write a letter
Nineteen dollars and ninety-three cents an hour. That's the average wage for an Austin worker, according to the latest National Compensation Survey issued by the Bureau of Labor Statistics.

The bureau calculated average hourly wages for 698,800 workers in 276 businesses as of May this year and released the blizzard of statistics on Sept. 26. While incentive pay, hazard pay, and cost-of-living adjustments were factored in, the figures did not include expenses, bonuses, or overtime. The headline facts were pretty clear: For many, being a unionized full-time employee in a big firm or the public sector means more money per hour. In comparison to 77 other metropolitan areas similarly studied, however, Austin was at or below the national average in all occupational groups.

Private industry fared worse than state and local government: The mean state worker wage was $23.54 per hour but only $19.05 for those in the private sector. The average union member made $25.22, a dramatic increase over the nonunion mean of $18.86. Size of employer was also a factor, with companies with fewer than 100 employees paying $15.93 per hour average, almost 10 bucks less than firms with 500 or more staff members. Another big difference-maker was whether a worker was full- or part-time. Part-timers averaged $9.58 an hour, less than half the mean full-time figure of $21.34.

But, as always, career defines salary. The highest single average hourly paycheck went to engineering managers, bringing in $92.57 per hour. The lowest-paid category of workers, food-preparation staff, struggling along on $6.55, would have to work for more than 14 hours to match that. Variable working hours also played a factor. The average manager worked 2,119 hours all last year, compared to 1,488 by elementary- and secondary-school teachers. But the long-est average working year was 2,215 for automotive service technicians – more hours than the manager but for about a third of the wage.

Buried deeper in the report was a more nuanced picture of the median, the midpoint for all wages and how many people earned more or less. While the mean annual wage for all workers was $43,604, the median was only $34,726. This data also revealed the biggest disparity between workers' salaries. The top 10% of engineering managers earned $359.77 an hour; the bottom 10% of the lowest-paid workers, food operatives earning tips, were only being paid an average of $2.24 per hour by their employers. 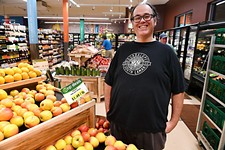