Las Manitas, the Pérez sisters, and a usable past 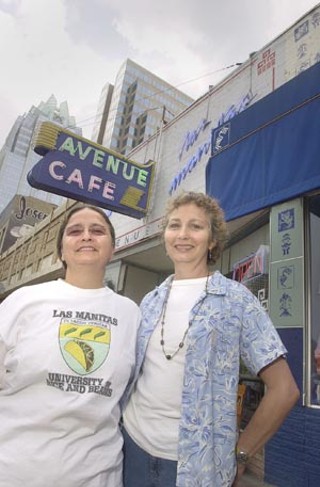 As Congress Avenue is Austin's Main Street, Las Manitas is our main street cafe – the hangout where everyone in town meets, greets, exchanges gossip, and maintains the ties that bind. If Las Manitas does indeed qualify as a "cultural landmark," perhaps this is why. In its own funky "Keep Austin Weird" way, it achieves the very goals championed by urban planners. Consider, for example, a thoughtful urban planning guide commissioned by the city – "Heritage Austin: A Community-Based Vision." It addresses the precise issue raised by pending redevelopment of the Las Manitas block: How can we best develop downtown Austin while preserving our city's unique character?

By respecting existing residents, fostering diversity and interaction and using downtown as a gathering place for the whole community, we can support a rich and unique cultural environment that will benefit us all. 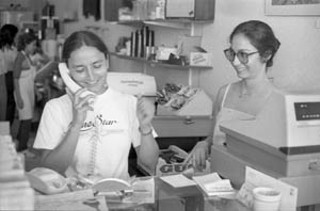 Cynthia (l) and Lidia, 1986. Las Manitas is home to a multigenerational staff and welcomes activists as well as celebrities. (Photo By Alan Pogue)

When a town's hottest power breakfast sets you back just $4.40 (two potato-and-egg tacos with coffee), every citizen has elbow-rubbing access to power. Part of what makes Las Manitas "so Austin" is that it's egalitarian. In Houston and Dallas, the power lunches happen in exclusive, expensive restaurants. Here, Mayor Wynn and his assistant Matt Curtis hold daily morning meetings over the same coffee as the rest of us. Out on the steamy patio, high-dollar attorneys sit at a picnic table across from the construction workers finishing out the lawyers' new offices. The humble intimacy of the cozy booths and close-set tables makes it feel like everyone's at the same party.

"They've created a perfect mix of the whole Austin scene, bankers to bohemians, existing in harmony for a brief moment in time," observes regular Chula Reynolds over lunch. "For the authenticity of the Austin experience, there's just no comparison."

"You always see well-known business people here, the politicos and the style makers," adds her dining companion, Sophia Collier. "More deals – the deals that have built Austin – have been cut in this place than anywhere else."

"At any booth and at any time, the stories of Austin are being told," Kirk Watson says by e-mail. "From those in Austin who have very little to those who are quite powerful, Las Manitas feeds them all and in different ways. It is one of those places like the Town Lake hike and bike trail or Barton Springs pool that you can see the varied people and weaves of Austin. And, you can just feel Austin's unique sense of happiness with who and what it is. 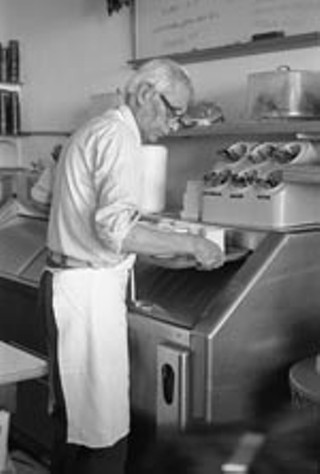 "Las Manitas feeds my need to be around authentic happiness. (Plus, I love the enchiladas aguacate.) The atmosphere is authentic, which I think makes it so comfortable. It also creates the greatest irony. The place itself is no bull, but the regulars produce some of the best bull in town. It is a place of little pretension itself, with a crowd pretentious enough to go there in hopes of just being seen."

A Circle of Artists

Communication across boundaries can connect the divided parts of our community toward their common goal of a healthy and prosperous city, and downtown is the logical place for those interactions to take place. – "Heritage Austin"

Lidia and Cynthia Pérez started out as entrepreneurs selling tacos from a stand on the Drag. When they rented the old Avenue Cafe in 1981, lower Congress was "mostly patronized by the winos and derelicts." But they took the place because the rent was all they could afford – $250 a month. Back then, there were hardly any other restaurants downtown, and no cheap Mexican places. They couldn't afford the $40 to have the old "Avenue Cafe" sign removed, so they added the words to the restaurant's name. For operating cash, they brought in a partner who cashed out her teacher retirement account, and borrowed money from their parents.

But it was really the dream of opening La Peña that drove them. Both women had been active in the Chicano student movement of the 1970s; Cynthia had recently returned to Austin by way of Berkeley and South America, where she was excited to discover coffeehouse-like peñas that brought people of all backgrounds together. So it was fully by design that Las Manitas and La Peña became gathering spots where people debate ideas and discuss social change. 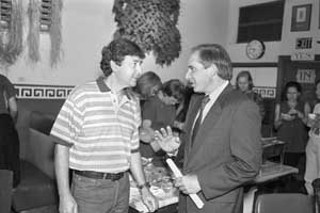 Started in 1982, La Peña is a nonprofit cultural and educational organization with a mission "to support artistic development, to provide exposure to emerging local visual artists, musicians, poets and other performing artists, and to offer Austin residents the full spectrum of traditional and contemporary Latino art." It was granted arts umbrella status from the city of Austin in 1986. Most of the profits from the restaurant over the years have gone back into their arts organization and true-blue political activism.

"Nobody has embodied Austin's brand of grassroots activism better – with grace, determination and consistency, against all odds, for so many years – than Cynthia and Lidia," says Chula Reynolds.

Others see it differently. "Those Las Manitas sisters try to parlay their cult status into political clout," objected one longtime player in downtown development. "They stick their noses into everything, where it doesn't belong. But don't quote me! I'd rather go lay down in a fire-ant bed than incur the wrath of those sisters."

Austin's diverse citizenry must be recognized as a unique and valuable resource. We should foster that diversity by ensuring opportunities for people of all cultures and income-levels. – "Heritage Austin" 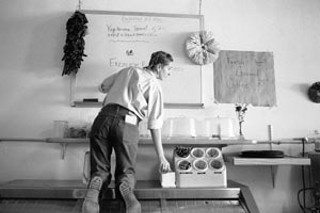 Over a late breakfast of eggs scrambled with fresh tomatoes, onions, and serrano peppers, Ruben Ramos – the Grammy-Award winning Tejano music legend – reminisces about washing dishes at the old Avenue Cafe in the late 1950s. The son of migrant workers, Ramos spent his childhood following the cotton crop moving across Texas. After years of missing school to help his family pick cotton, a stable restaurant dishwashing job offered a huge step up.

Eating with him is Rick Fuentes, the young accordion-player in his band, who confesses that this is his first time at Las Manitas. They're with Josh Lopez, a singer featured on the Austin-produced inspirational Christian TV show Alabanza Real, which airs on TBN Enlace worldwide. "I love bringing all my friends here," says Lopez as Fuentes pulls out his CDs. "I love the family feeling."

"The sisters have been good friends to us, to our community," notes Ramos. During 1997's SXSW, for example, Las Manitas hosted an intimate acoustic show that brought together an all-star Tex-Mex assemblage. That coming together of diverse Tejano-influenced artists (Ramos, Rick Trevino, Joe Ely, Los Lobos members, Freddy Fender, and Flaco Jimenez) led to their recording Los Super Seven, a dynamite album that won a 1998 Grammy Award.

"This year, Cynthia and Lidia were instrumental in setting up our first University of Texas appearance – Los Grandes de la Música Tejana," adds Ramos. "I love them both for what they do – always helping in some way." 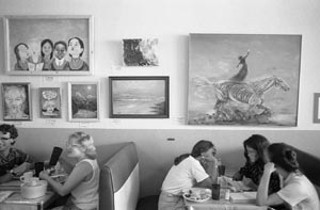 Small businesses are a vital component of a sustainable economy. They develop from within the community, filling identified gaps and solidifying our economic base. They can also often become "seed" projects or "incubators" that spur additional investment and new businesses.

The seventh and eighth of nine children born to immigrants from northern Mexico, the Pérez sisters grew up in a Hispanic community on the west side of San Antonio. Their parents, Ana Marìa Coronado and Porfirio Pérez, began life in America as pecan shellers and had only third- and seventh-grade educations respectively. Yet they believed a strong work ethic could lead to a better life.

The Pérez padres supported their family of 11 by running a Mexican bakery and corner store. From the 1940s on, it served as the neighborhood community center. Señora Pérez raised nine children and worked every day in the family business, yet always made time to help her neighbors. Cynthia and Lidia remember their mother, now in her 90s, exhorting them to "work hard for ourselves and for our people." Las manitas (little hands, sisters, buddies) grew up working in the family business, alongside their brothers and sisters. 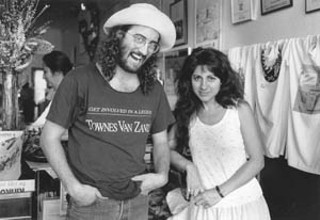 "My mother knew everybody – she was the neighborhood interpreter, translator, and writer of letters," said Cynthia. "She gave people food on credit. Like to the migrant worker families, who could only afford to pay her back when they returned to San Antonio after following the crops. She helped people get money orders, get their citizenship, and became godmother to many children in our neighborhood.

"We hated all that hard work growing up – and all that extra work helping other people!" Cynthia says, shaking her head. "We went to college and swore we would never do such hard work again, that we'd never run a store or a restaurant like our parents. But now we've turned into the epitome of what our parents were," Cynthia chuckles. "I guess you have to get to a certain level of maturity to appreciate what was going on in your own damn house."

Waitstaff at Las Manitas wear a T-shirt bearing a collegiate-like crest for the "University of Rice and Beans." (It was inspired when Cynthia's young daughter, Alma, saw a sign for prestigious Rice University in Houston and asked, "That's all they have there – rice? No beans?")

When they hire unskilled young people, "We don't let them stay as dishwashers," Lidia asserts. "We're always coaching them, teaching them, promoting them up the line." Capable kitchen staff are encouraged to become waitstaff, to help them improve their English and their confidence. Staff are encouraged to go to college. "I tell them, you can be a worker, a manager, or an owner – take your pick," says Cynthia.

The sisters love to tell about restaurant graduates like former cashier Felix Fuentes, who went on to Stanford and the Wharton School of Business. At the University of Rice and Beans, "we have lots of those success stories," says Cynthia. "This is a hard place to work, and I'm a hard-nose with them, but they often come back and thank me." Former employees have gone on to open their own catering companies, taco stands, and restaurants, such as El Sol y La Luna, on South Congress, just a few blocks away.

"Heritage Austin" was produced by the Heritage Society of Austin on behalf of the city of Austin and issued as a 57-page report in 2002. It can be downloaded at www.cityofaustin.org/downtown/downloads/heritageweb.pdf.