I-35 Planning Not a Two-Way Street

To some East Austin residents, the Texas Dept. of Transportation is an Orwellian evil empire-like state agency that will pave over your house if not watched closely, despite the agency's best efforts to put on a happy face. 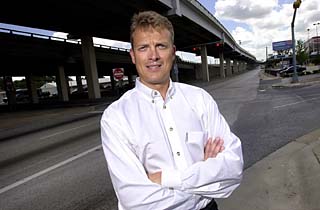 To some East Austin residents, the Texas Dept. of Transportation is an Orwellian evil empire-like state agency that will pave over your house if not watched closely, despite the agency's best efforts to put on a happy face. That was clear at last Wednesday's less-than-productive meeting, held at Hyde Park's First English Lutheran Church, between TxDOT officials and Eastside neighborhood leaders, regarding the controversial $2 billion expansion plans for I-35. Affecting 45 miles of highway from Georgetown to Buda, the improvements would add two main lanes and two elevated HOV lanes through downtown Austin. In addition, TxDOT would reconfigure the dangerous patches that make Austin's stretch of I-35 the highway's deadliest.

"There's a difference between public involvement and public information," one neighborhood leader said after the meeting. "These meetings are public information, when they stand up there and say, 'This is what we've decided.'" TxDOT had requested the meeting, ostensibly to seek feedback from leaders of the Austin Neighborhoods Council and representatives of various Eastside neighborhoods abutting the highway, and to update them on a couple of minute adjustments to the design, which is nearing completion. But the gathering degenerated into a rehashing of debates held many times over the project's 13-year planning phase, with the two sides reciting their standard, well-trod arguments as if they were following a script. On one side, seated around a long table in the church's classroom, were neighborhood leaders asking the same questions they've asked for months: Why does the highway go over, rather than under, Airport Boulevard (which they believe will cause more noise and disruption for residents)? Why is there no direct access to Airport or the Robert Mueller Airport site? What's to prevent people from cutting through their neighborhood to reach Mueller?

On the other side were EarthTech's Roland Gamble -- TxDOT's lead consultant on the project and a former TxDOT engineer -- and TxDOT project manager Charles Davidson, who regurgitated the same detail-bereft answers neighborhood leaders say they discarded long ago. In a limp monotone, Gamble explained it was too expensive and logistically difficult to build the highway under Airport Boulevard. He also asserted that a direct connection from the highway to Airport would be too dangerous and assured residents that TxDOT doesn't expect drivers to cut through neighborhoods to reach Mueller. At one point, he promised to drive the two routes to prove TxDOT's way was faster.

Stefan Schuster, head of the North Central Interstate 35 Neighborhoods Coalition of Eastside neighborhoods fighting the current design, asked Gamble several times for traffic flow analyses, cost and feasibility assessments, and anything else the agency used to support its arguments. "I would feel a lot better if they could at least show me the cocktail napkin where these other options were considered," Schuster said. Gamble demurred. "We could show you the numbers, but I'm not sure they'd mean anything to you."

After the meeting, Schuster said he's requested detailed information from TxDOT numerous times, but the department has blown him off repeatedly. "I'm very surprised at the disdain they display for taking public input, like it's this chore they have to go through, when we read all the time about highway projects from other parts of the country that benefited from public involvement," he said.

After the two sides talked at each other for an hour, the ANC's Will Bozeman stood to wrap up the meeting and posed a question that should've brought the get-together to a diplomatic end: "What is helpful from us right now?" An awkward silence followed. Gamble hesitated, then smirked and said, "I'm not sure you want me to answer that." Everyone laughed, and it seemed obvious what Gamble really wanted to say -- as one neighborhood leader put it, "Get out of our way and let us do our jobs." Instead, Gamble advised the audience to send TxDOT "good, constructive criticism."

The moment underscored the disconnect in the widening controversy over the I-35 expansion. After numerous public meetings, neighborhood leaders feel they've never gotten straight answers from TxDOT to pertinent questions, and TxDOT officials are increasingly frustrated addressing issues they've discussed countless times, including Airport Boulevard and the Mueller site. More than that, neighborhood leaders say, it seems TxDOT addresses the public in an eye-rolling, because-we-have-to manner, instead of fostering genuine public collaboration.

The sheer size of the improvement project, slated for completion by 2020, and its potential to increase traffic, noise, and pollution have led Eastside residents to band together to question, fight and prick TxDOT at every turn. Meanwhile, TxDOT is proceeding with plans to conduct an environmental assessment this summer and fall, and hopes to submit the final design for federal approval next year. Since the Austin City Council can kill the project even during the final planning stage, and given the distrust many Eastside residents have of TxDOT, public involvement seems especially critical. TxDOT officials say they've gone above and beyond, holding more than 100 meetings with various neighborhood groups, taking thousands of public comments, printing newsletters to keep residents informed of design changes and maintaining a project Web site. Concerned residents "focus on the things we can't do," Davidson said. "It's not that we aren't listening. We are listening. But I have to look at other users. I can't focus on these six blocks."

Deeming TxDOT's public involvement process "divide and conquer," neighborhood leaders counter that quality should count more than quantity. TxDOT talks with groups one at a time, but has never held an inclusive meeting for the city, neighborhood leaders, and Capital Metro officials to discuss their needs and worries.

After getting letters from Schuster and other Eastside leaders critical of TxDOT and its I-35 design, State Sen. Gonzalo Barrientos replied in a June 11 letter, "My office receives complaints about TxDOT's public involvement process more frequently than I would like. Clearly, the quality of the public's experience should be as relevant as the number of opportunities."