One night on adult trauma at Brackenridge

The City Council kicked off its budget talks in earnest last week, with the least grim part of the FY2003 proposed budget -- public safety -- along with aviation, the Convention Center, and Solid Waste Services.

Former Austin Police Officer Tim Enlow lashes out at the department's renewed campaign to conquer drug dealing, prostitution, and other crimes in the Rundberg area neighborhood.

Kind of an Ally

I-35 Planning Not a Two-Way Street

To some East Austin residents, the Texas Dept. of Transportation is an Orwellian evil empire-like state agency that will pave over your house if not watched closely, despite the agency's best efforts to put on a happy face.

Council a No-Show at SOS Events

C.L.E.A.T. calls for a moratorium on political advertising; we call that pointless.

It's time to look more intelligently at economic development

Dubya plays corporate performer -- but it's just pretend; and Congress sells out its trade authority for cold, hard cash. 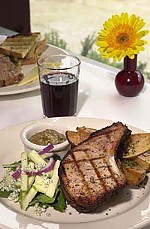 Lambert's has the buzz, the location, the pedigree, and the menu to make some noise in Austin. But does it have MM Pack's recommendation?

Virginia B. Wood sets the record straight on Rocco's Grill and sets the town to stompin' grapes this weekend in this week's "Food-o-File."

Have the need to feed with a relative degree of speed? Erin Mosow takes you on a gourmet takeout tour in this week's "Second Helpings."

Looking for great white wines under $10? You came to the right man: Wes Marshall and "Liquid Assets."

Confessions of a 'Little House' Lover

Bonnets and braids and pioneer lovin': Christina Smith treks to the land of Laura Ingalls Wilder.

'Little House' on the Backlot: A Conversation With Screenwriter Stephen Harrigan

A conversation with screenwriter Stephen Harrigan

Brett Morgen and Nanette Burstein's The Kid Stays in the Picture documents the larger-than-life story of Robert Evans, actor, producer, and "legendary cocksman."

Back to school with Professor Mims

Bossa nova and an wonderful spin on a timeless Greek tragedy make Black Orpheus a keeper.

The Kid Stays in the Picture

"The figurative acrylics and oils of Austin's Erin Cone reveal no specific flow of story; neither are they reproduced as visual elements of what the hipper literati like to call graphic novels. Cone's portraits stand alone," writes Wayne Alan Brenner. See Cone's second annual exhibition at the Wally Workman Gallery during August, and be pleased with your decision.

Stephen goes to a Mega bash and wonders if window dressings can be plagiarized.

What are the safest non-prescription pain remedies and how do they work compared to the regular pain relievers?

Cedrick Trout (shudder) comes to dinner. But that's not quite as big a joke as Major League Baseball's idea of steroid testing.