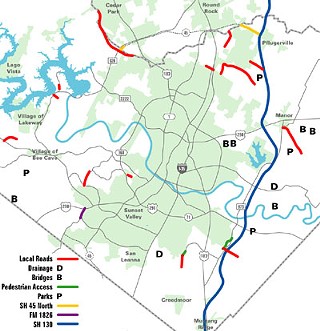 In 1998, environmental and development interests came together to support a far-reaching city bond package (most importantly, the Prop. 2 preservation land acquisition). This year's county bond election could turn out to be a milder, sleepier throwback to those pre-conciliatory days -- and then again, it might not. The loudest oppositional fervor died down considerably last week after the Commissioners Court removed the most volatile proposition from the ballot: to expand a suburban road over environmentally and politically sensitive terrain. That's just as well, because the Frate Barker Road issue was distracting attention from other bond propositions more worthy of examination. And there remains plenty of proposed money and projects to fuss over.

The newly adjusted overall bond package -- $184.9 million -- represents, on average, a $35-$39 annual property tax increase for county residents during the next six to eight years. That in itself is the reason some political groups, such as the South Austin Democrats, are opposing the package in its entirety, advocating instead a return to the $80 million total that County Commissioners originally envisioned. And other groups with environmental and neighborhood interests (e.g., Save Our Springs Alliance, Austin Sierra Club, Austin Neighborhoods Together, Travis Co. Green Party) have gone on record opposing the overall package as well, saying it lacks three important things: affordability, balance, and equity. City of Austin residents may feel especially slighted. According to city estimates, city residents pay 75% of the county tax bill -- yet not one of the proposed bond projects is within Austin city limits.

Those who favor the package include a coalition of civic and business groups called Yes! Travis County Bonds Committee (i.e., Austin Area Research Organization, the Real Estate Council of Austin, Greater Austin Chamber of Commerce, Capital Area Transportation Coalition, Austin 2010). They say the bonds will improve safety, increase mobility, and help maintain our quality of life. What's good for the county, they argue, is good for city residents.

Here's an item-by-item review of what the county wants you to authorize them to do with your tax dollars:

This is the bricks-and-mortar stuff of county government -- repairing bridges, expanding and correcting roads for easier traffic flow, and fixing drainage problems. But pity the poor pedestrian, for whom only about $300,000 of this bond proposition is earmarked. The ped money will go toward funding two projects -- one on McKinney Falls Parkway and another along FM 973. We're told that foot-and-bike accessibility will be integrated as a matter of course into the other road projects, but vehicular traffic is obviously the main focus. Proponents of this proposition portray it as a means toward relieving traffic congestion and easing safety concerns. Opposition centers around the cost, and the unfortunate inclusion of the Travis Cook Road project. This sprawl road in southwest Travis County would be widened to accommodate the burgeoning suburban traffic traveling from Southwest Parkway to Stratus Properties' Barton Creek development.

In an ideal world, the city and county would pool their resources to fund and maintain public parks, but that would require one side or the other relinquishing something more politically precious: control. City of Austin voters decided in 1998 to fund the city's ambitious Destination Parks program, and the county now seeks voter approval on an altogether separate (yet very similar) regional parks endeavor. It's hard to quibble with parks, as even the groups opposing the overall package admit. Austin political consultant David Butts believes they erred in lumping this proposition in with the others. "I think coming out against parks is a mistake," he says. "It makes [the opposition] look like a bunch of flat-earthers."

Prop. 2 bond money would be used to improve and renovate two existing parks in the southeast and northeast, and to acquire land for two new parks in the eastern and southwestern county precincts. Plans call for fully developed parks with ball and soccer fields, tennis courts, picnic areas, and playscapes. Environmentalists say they fear Southwest Metro Park's location within the Barton Springs watershed could lead to further degradation of the Springs because of the anticipated use of pesticides and fertilizers at the park. And they say it could be the carrot that lures more developers to the Lakeway/620 corridor.

These two roadway projects will put regional cooperation to the test, as voters weigh whether we should be joined at each hip with Williamson County to the north and Hays to the south. The SH 45 component asks voters to approve funding for right-of-way land acquisitions on the eastern and western tips of the proposed SH 45 North, which will connect U.S. 183 to a northern extension of MoPac and I-35 (and, eventually, to SH 130). As the large dotted lines show on the map, the proposed R-O-W areas cover Grand Avenue Parkway/FM 685 near Pflugerville and U.S. 183/RM 620/Anderson Mill in northwest Travis County. The city of Austin has already agreed to kick in $6 million to purchase land for the SH 45 North tollway, but it's less than enthusiastic about the southern counterpart, as evidenced by its recent removal of SH 45 South from the city transportation plan. (SH 45 South is not a ballot item this election year, although voters in 1997 approved right-of-way land acquisitions for roadway construction near South MoPac. The city of Austin objects to SH 45 South's eastern extension to I-35, however, because of its potential impact on MoPac.) This ballot item would only include the 45 North component. Supporters of the 45 North project promote it as a Smart Growth plan, because it is far from the Edwards Aquifer and would strengthen regional ties between Williamson and Travis counties. Opponents say both 45 projects will dump more traffic onto MoPac, turning the local roadway into a regional alternative to I-35. Said political consultant Mike Blizzard: "It is not in the city's interest to spend our tax dollars to facilitate growth in a neighboring county while making it easier for that new growth to commute to our city and use our infrastructure on a daily basis."

The second part of Prop. 3 calls for R-O-W acquisitions to expand FM 1826 from U.S. 290 to Slaughter Lane, in the increasingly overcrowded boom pockets along the Travis/Hays border. The biggest downside: The proposed construction area sits directly atop of the Edwards Aquifer.

You need regularly updated Cliff's Notes to understand the financial and political intricacies of this 91-mile project -- but if you're wondering why the county keeps asking us to kick in right-of-way funding for this state highway, you're not alone. The county sometimes wonders the same thing. Let's see, we approved $4 million for R-O-W purchases in 1997; $20 million in 2000; and now, only a year later, the county (by way of the Texas Turnpike Authority) has come a-calling once again -- this time asking for $66.2 million. If the measure passes -- and most predictions are that it will -- this will allegedly be our last vote for the project, in theory capping our contribution at $90 million for land acquisition costs. But then, that's what we thought last year, when we were told we wouldn't go beyond a $24 million contribution. The county is of the mindset that funding for R-O-W acquisitions should have been, ideally, an 80%-20% split at most, with the state picking up the larger portion of the tab. Now the county's costs have jumped to 50%, and many are starting to believe that it could rise to 100%.

It doesn't help matters that SH 130 lost out on $155 million in federal funding last summer, largely because state officials believed it wouldn't be prudent to ask for money while Texas was awaiting environmental clearance on the project. Not even a local delegation could convince federal officials to let go of some funding. "When we found out from Senator [Phil] Gramm and Congressman [Lloyd] Doggett that TxDOT had not even sent in a request for funding, we started feeling verklempt [emotional] at that point," said County Commissioner Karen Sonleitner (quoting Saturday Night Live's Michael Myers as Linda Richman of "Coffee Talk"), who was among the locals who traveled to Washington, D.C., last spring to lobby for highway funding. "There was nothing we could do."

Despite the road's bad karma, the project is popular in many political corners because of the widely held belief that the eastern bypass will reduce traffic strains on I-35. For example, one recent Texas Turnpike Authority report estimates that daily I-35 traffic will be reduced by 15,000 vehicles if SH 130 is built as a non-toll road. That may sound like a lot, but it represents only about 8% of the road's current traffic of 193,000 vehicles a day. Similar studies are under way to determine SH 130's impact (presumably less) as a toll road. Both the study and a decision on the toll road are expected by year's end.