Thinking Inside the Big Box 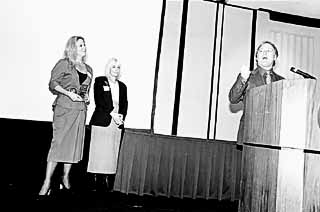 Quick, what individual or organization has been most responsible for setting off the downtown construction boom that's changing life as we know it in Austin's Central Business District? The answer has three words, and no, it's not Albert Leslie Cochran. If you guessed Mayor Kirk Watson, you're essentially correct, though the annual award presented by the Downtown Austin Alliance Friday technically went to the city of Austin.

The DAA praised City Council members, the mayor, and city staff for "thinking outside the box" to develop the Smart Growth incentive packages that have lured three major employers, loft apartments, and shopping centers downtown. Perhaps Austin taxpayers should have been thanked as well, since they've gone along quietly -- for the most part -- as the city has showered more than $50 million on CBD projects to help them grow. Nor were there any purple hearts given to the downtown retailers and club owners who've become casualties of skyrocketing property values.

But such ecumenical considerations were outside the scope of the DAA Impact Awards luncheon, a cozy, back-patting affair in which the alliance congratulates members for their high-profile ventures in downtown revitalization. The awards were set up four years ago, at about the time the political blood pacts were being sworn that made the CBD the city's No. 1 civic priority.

The theme of Friday's award presentation was the importance of laying foundations, and the city government arguably deserves recognition for proving that it can cooperate with developers to advance worthy, if narrow, public goals. Considering that other cities have shot chunks of dough larger than 50 mil on convention centers that that host mostly pigeons, Austin's downtown development has certainly been smart by comparison.

One darling of Austin's New Urban movement, architecture firm Susman Tisdale Gayle, won the design award for its renovation of the 7-Up bottling plant that now serves as the headquarters for Caritas, and for spiffing up the Texas Trial Lawyers Association's high-rise at 12th and Colorado. STG is the creative force behind GSD&M's "Idea City" (a previous Impact Award winner) and UT's Applied Computational and Engineering Sciences Building -- concepts that contribute to the growing sensation that we're walking around inside a World's Fair exhibit that will any day be taken down.

Rounding out the winners were T. Stacy and Associates for the ambitious restoration of the Inter-Continental Stephen F. Austin Hotel, and Post Properties for the experiment in colliding colors that is Post West Avenue Lofts off West Fifth Street.

Given all these brave ventures in public/private partnership, one wonders, what's the state of the downtown economy today? Desperate, reports Bob Woody, president of the East Sixth Street Community Association (which, interestingly, formed eight years ago to fight the city's promotion of a sidewalk beautification initiative). Woody says many local downtown businesses will disappear before the benefits of the downtown renaissance arrive.

"What kinds of incentives can you give a little retailer to come downtown?" says Woody, citing the parking woes and high property taxes that have followed on the city's deals to bring employers like Intel and Vignette to the CBD. If and when the tide of new urban residents shows up, says Woody, most of the retailers there to serve them will be national chains. He notes that popular nightclub Maggie Mae's has slimmed down its venue to save money on taxes, and Earl Campbell's new establishment on Sixth has already filed for bankruptcy.

But most telling may be the imminent departure of Nunn Electric Supply on East Third Street, currently boxed in almost completely by construction on the city's Convention Center. Located in what used to be the city's hub of supply houses, Nunn is now considered too old-school for the upscale property market. Three restaurants, including a P.F. Chang's outlet, are opening within two blocks of the supplier, which reports that it will probably be forced to follow Reddy Ice out of the district as soon as the lot it leases sells to a new owner.

Like the song says, we'd better turn to face the strange changes: There are 50 downtown works still to go on the city's emerging projects map.