David Van Os Is a High-Profile, Hard-Charging Labor Lawyer -- but His Own Employees Say He Stuck It to Their Union Labor attorney David Van Os is about the last man in Texas you would expect to be called a union-buster. For more than 20 years, he's been going to court to fight for the little guy he's a bare-knuckled champion of workers' rights in a 'right-to-work' state, where 'concerted activity' among employees is synonymous with treason. He has become the go-to litigator for organized labor, and is almost alone among state Democratic Party leaders in boasting that the Fair Labor Standards and National Labor Relations Acts are two of his party's finest achievements. In his 1998 state Supreme Court race, Van Os pulled in nearly $100,000 from pro-labor forces he barnstormed union halls, ripping into a Texas Supreme Court decision he said denied workers the protection of the courts when they were wrongfully terminated.

Yet this longtime labor champion, who two years ago moved his practice from Austin to San Antonio, is now defending himself against allegations that he illegally suppressed his own office staff's attempt to organize a union. Three former employees at Van Os' San Antonio office Mary Louise Davila, Kandace Kay Konrad, and Mary Ann Ybarra have accused Van Os of terminating them and threatening to fire other staff after they announced their intent to join the Office and Professional Employees International Union. Two more employees, Oralia Castillo and Nicole R. Betters, say they were 'constructively discharged' from the office (meaning they felt working conditions had been made intolerable). The former employees also claim in formal charges filed with the National Labor Relations Board in the fall of last year that their boss fostered an anti-union environment by 'imposing an overbroad and discriminatory no-talking rule' on employees, 'impliedly threatening employees in retaliation for their association with known Union adherents,' 'harassing employees at their homes by telephone,' even threatening to close his business as a result of their union activity.

Last week, the NLRB issued a formal complaint against Van Os and Associates, detailing the allegations by his former employees and requiring Van Os either to concede to or contest the charges (see below).

Van Os' stature and his connections in the state's small labor establishment are such that the NLRB opted to punt its investigation of the employees' charges out of its San Antonio office to a bureau far, far, away in Phoenix. Phoenix NLRB spokesman Robert Reisinger said they wanted to avoid any appearance that the case was being handled by people who did business with the Van Os firm. Given the number of parties involved, the stakes in the dispute are likely to be substantial. Commonly, complainants who seek compensation from employers through the NLRB ask to be reinstated in their jobs and receive the salaries they would have been paid had they not left or been fired. In this case, that would be months of back pay for the five complainants. Recently, the NLRB presented Van Os with a settlement agreement. But if the parties can't reach agreement, Van Os and his former employees may soon be standing across from each other before an NLRB judge, and could perhaps wind up in court.

Organized labor has formed a united -- if silent -- front in support of Van Os, offering no comment to the Chronicle other than to say that Van Os is a labor advocate without peer. They point out that Van Os' offices in Austin, where he spent most of his career, were unionized workplaces. Former partners, even those who had acrimonious partings with Van Os, don't want to talk about the case. According to the NLRB documents signed by former employees formally listing their charges against him, Van Os imposed rules and restrictions on them designed to interfere with their attempts to unionize. The employees allege that the office staff were confronted with an "overbroad verbal rule" that prohibited employees from discussing wages and working conditions, that employees were required to report all "Union and/or protected concerted activities" to their boss, and that they were forced to sign an "overbroad oath" limiting their participation in union activity. The workers also charge at the NLRB that Van Os informed his staff that "employees were going to be forced out of their positions with the Employer and their working conditions made more difficult" in retaliation for unionizing, and that they were told they were "being subjected to surveillance."

Van Os has declined to speak to the Chronicle about the NLRB case, and the NLRB will not release Van Os' response to the allegations, saying those documents are part of their investigative file. Van Os' attorney has also refused to provide a copy of his client's response to the charges. But Van Os' side of the story is at least partially expressed in e-mail correspondence he sent to his staff immediately after they presented him with their union cards. In those exchanges, in which Van Os implies that the dispute is in part created by poor performance by some members of his staff, he says he supports employees' efforts to unionize, but he also chides them for bargaining in bad faith, irresponsibly wasting his time and resources.

"I look forward to meeting with y'all for the excitement and challenge of negotiating a first contract. It will be fun," Van Os writes. But in that same message, he complains that he's "neck deep in intense business" and threatens to terminate anyone who would "refuse to discuss legitimate work issues with me" or commit any other "insubordination." "I am telling you all right now and I am not going to be giving any benefit of the doubt," Van Os warns. He also says that certain employees "cannot move the work anywhere near as fast as is needed" and appeals to employees not to hamstring his business by fighting "obstructive battles" with him rather than improving their performance. He tells employees that he's already exhausted by 15-hour days and cannot handle the additional stress.

"Make no mistake about it, what you are now doing absolutely threatens the survivability of this business because of the very simple reality that my time was already stretched to the limit. ... I am not expressing hostility to unionization. ... I am only telling you to be aware of what it will do to this business ... if you decide to use the Union as a battle weapon to protect incompetence at all costs," Van Os writes.

On the day staff presented their union cards to Van Os, the Friday before Memorial Day last year, Van Os kept two secretaries after work for what he described in an e-mail message as a "status and strategy session." Other staff members objected, saying Van Os was attempting to discipline the secretaries without union representation. The dispute continued even after the office closed, in a series of lengthy and tense e-mail exchanges between Van Os and a staff member (copied to other employees) over the holiday weekend.

In e-mail correspondence with his staff, Van Os tells employees that their objection to him discussing a "routine work assignment" with his secretaries constituted a "declaration of war." Van Os states that he did not intend to discipline the two employees, and was therefore well within his rights to talk to them without union representatives present. He threatens to fire any employee who interferes in his management in the future. "If anyone else plans to prevent me from normal day-to-day management, especially now when I am ... so badly in need of teamwork, by such ideas as the ridiculous suggestion that I cannot have meetings with employees to discuss work strategies, I am going to have to respond with a tough business attitude," Van Os writes, adding in another note that "any employee who 'instructs' other employees not to discuss work issues with me will be terminated immediately."

It was sure enough tough business after Memorial Day, when one of the secretaries Van Os detained the previous Friday was fired when she returned to work. According to employees' charges at the NLRB, another staffer left a few days later, and another would be terminated three months later. The NLRB complaints also allege that two employees had already been discharged in April and May for union activity.

Van Os has referred all press inquiries about the NLRB case to his attorney at Akin, Gump, Strauss, Hauer, and Feld, an ironic choice for a labor lawyer, considering that Akin, Gump typically sits on the same side of the table as corporate employers, not their employees. Attorney Shelton Padgett says "it's absurd" to claim that Van Os fired employees to prevent them from forming a union. According to Padgett, the employee fired on May 30, Mary Louise Davila, had deleted a computer file without authorization. Padgett furthermore denies that Van Os enforced any rule prohibiting employees from meeting together.

Tim Mahoney, an Austin lawyer who last year was assigned the task of overseeing union bargaining in Van Os' office, says the only thing Van Os did wrong was to give too many chances to disgruntled and disloyal employees, who then "turned and bit him." "These are petty, mean-spirited people who have no perspective," says Mahoney. "Any of their real or imagined grievances didn't have anything to do with union activity." 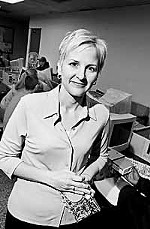