Playback: The Return of the Austin Smoking Ban

A decade after the initial smoking ban, local health group hopes to stomp out smoking patios 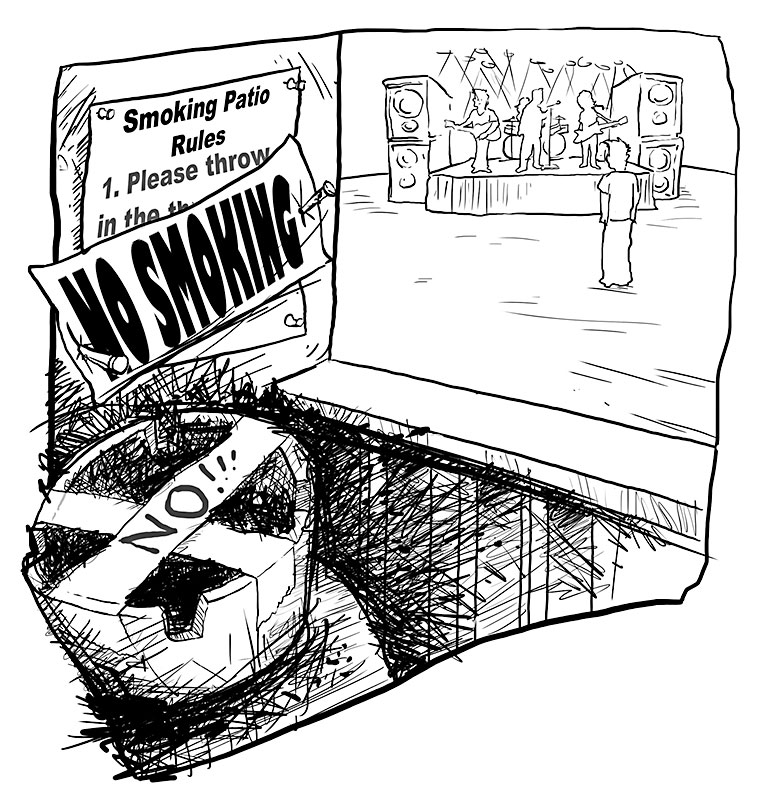 A public health organization is working to amend Austin's smoking ordinance to restrict vaping anywhere smoking is forbidden and prohibit cigarette smoking on patios of restaurants and bars.

The initiative comes courtesy of Central Health, a taxpayer-financed hospital district in Travis County. Central Health's Communications Director Ted Burton said he expects the amendment to go before City Council between November and January. They'll need a council member to sponsor the proposal and then a three-fourths majority vote for approval.

"It would put us out of business," stressed Jason McNeely, co-owner of Hotel Vegas, which boasts one of Austin's best music clubs and busiest patios. "People come out to drink and they like to smoke when they drink. That's nightlife. If we can't let people smoke on our patio, the kids will start doing house shows instead of playing here.

"I can't believe this proposal would come up right now, on top of everything else, while the city's trying to do things to help venues [via Mayor Steve Adler's Omnibus Resolution]."

The list of live music venues that would be impacted by a "no smoking on the patio" rule is longer than a Virginia Slim 120: Saxon Pub, White Horse, Hole in the Wall, Sidewinder, Mohawk, Empire, Barracuda, Lost Well, Sahara Lounge, Flamingo Cantina, Spider House Ballroom, Strange Brew, Beerland, Badlands, Swan Dive, Radio Coffee & Beer, Dozen Street, and the Skylark Lounge – to name a few. For bars like Cheer Up Charlies and Hard Luck Lounge, with giant patios and tiny interiors, the restriction would be particularly troublesome.

Smoking patios came into vogue in 2005, after the community voted in a razor-thin 52% margin to ban smoking inside businesses. Austin didn't arrive at that outcome easily: The vote was preceded by months of vehement disagreement between supporters of the measure who considered it a public health issue and those who viewed prohibiting a legal and regulated substance in private businesses as an assault on freedom. Music venue owners represented a loud voice of opposition, arguing it would hurt their businesses.

Beerland owner Randall Stockton says the implementation of the smoking ordinance resulted in a "significant drop" in his business, from which he's never fully recovered. He observed that bars that weren't able to build patios after 2005 suffered and ones that did prospered.

"Seems like now the most successful bars and venues have sizable patios," offered Stockton, who owns multiple local watering holes. "And anyone that actually goes out knows exactly why they're more successful."

While venue owners are worried about smoke-free patios killing their business, Central Health's Burton says the amendment isn't about deterring people from smoking, but about protecting the public from secondhand smoke.

"We feel the community has a right to say, 'I want to breathe smoke-free air.' That's what the smoking ordinance is all about," he said. "This is about protecting not just customers, but workers, many of whom are low-income, uninsured, minority populations."

For tobacco-adverse customers, there's already a place where they're protected from secondhand carcinogens: inside the bar. Because of this, smoking patios proved an effective compromise to the indoor smoking ban. Taking them away means that patrons would have to finish their drinks and leave the premises to light up since current laws specify that smoking within 15 feet of an entrance is illegal.

The potential law would also make Austin a more smoke-restrictive entertainment city than Portland, New York, Chicago, Los Angeles, New Orleans, and Denver – where you can smoke on patios – and Nashville, where you can still smoke in bars. Megan Cermak, program manager of Central Health's Equity Policy Council, the group that drafted the amendment with input from health, policy, and community experts, points to Palo Alto, San Jose, Boston, Boulder, and Philadelphia having smoke-free patio laws – though it's worth noting that most of those aren't known as live music hot spots.

"There's no evidence from other cities where these types of public smoking policies have been enacted that there was any harm to their business," argues Burton. "In fact, there was research the city did a few years ago that said 88 percent of Austin residents said they would frequent bar and restaurant patios just as often if not more if they were smoke-free."

History has proven otherwise for Austin's music venues. After Red River rockplex Room 710 shuttered in 2010, owner Asher Garber penned a letter to the Chronicle titled "Austin Got Hoodwinked by Smoking Ban," calling bullshit on the theory that more customers would patronize music venues if they weren't smoky. He noted that his average monthly sales dropped from $35,000 before the ban to $25,000 afterward and characterized the ordinance as "one of a number of nails in the 710 coffin."

"We're following this discussion with great interest," says AMP Director Jennifer Houlihan. "The health of Austin's nightlife staff, talent, and patrons is important to us, as is the continued financial health of the small businesses that provide thousands of jobs and pour millions of dollars annually into our local economy. We're hopeful a shared solution can be found."

Yet Central Health remains unwavering in its plan for smoke-free patios. Asked if they'd consider writing an exemption for music venues into their anti-smoking proposal, Burton said no.

"Something we've heard from bar and restaurant owners is that it needs to be an even playing field," offered Cermak. "It doesn't hurt business if everyone is abiding by the same rules."

If the embroiling controversy of the 2005 smoking ordinance was any indication, expect nothing short of scorched earth between live music venue owners and anti-smoking advocates as this amendment advances. Until then, smoke 'em if you got 'em.

Phil Collins visits Austin in September to discuss the "Genesis" of Texas' independence: the Alamo. The UK pop heavyweight is a lifelong Alamo fanatic who assembled the world's largest collection of artifacts, including Davy Crockett's guns and Jim Bowie's knife, then donated it to Texas in 2014 for a forthcoming museum. Collins sits on the Remembering the Alamo panel at Texas Tribune Fest, Sept. 23-25, on the UT campus with son-of-a-Jeb, George P. Bush, and Senator José Menéndez.

Gary Clark Jr. hung his own name on Antone's marquee last Thursday, signaling a surprise gig for the 41st anniversary of the club he cut his teeth in and now co-owns. Austin's Home of the Blues packed in for the 32-year-old local's two-hour home-turf set, which opened with battle-tested material, then soared with Story of Sonny Boy Slim tracks boosted by magnificent guitar extrapolations. "I'm not going to lie, this is a major moment for me," he smiled as 1-year-old son Zion stood side-stage hitting a guitar case with a drumstick.

L7 took to the streets for an impromptu sidewalk performance on Sixth and Red River outside the old Emo's last Saturday night. The reunited L.A. punk gang blasted through a short set of joyfully raging sing-alongs including "Shitlist" with frontwoman Donita Sparks screaming over battery-powered amps and Demetra Plakas' bucket drumming. Hours later, they laid waste to a packed Mohawk.

A version of this article appeared in print on July 22, 2016 with the headline: Playback: Return of the Smoking Ban
More Playback columns 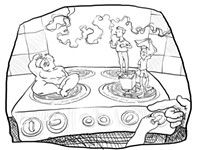