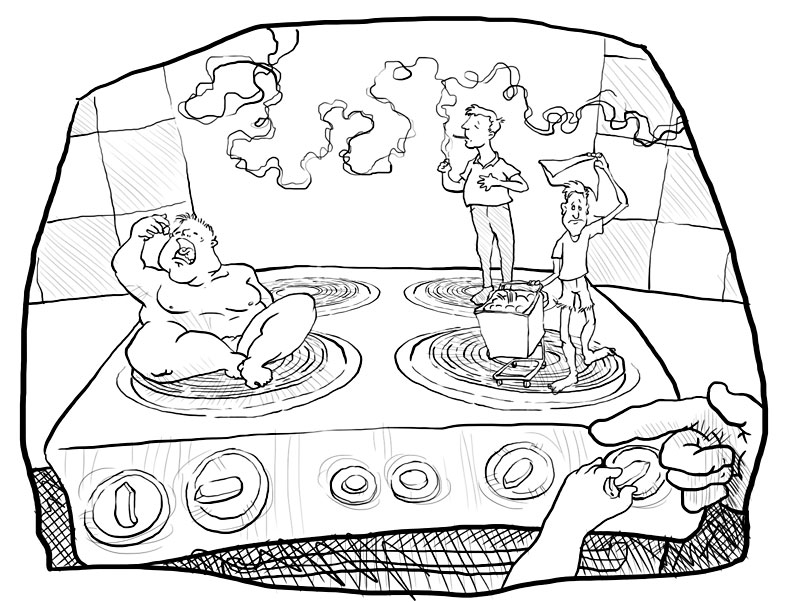 In Austin, that age-old bit of wisdom lends itself to the incendiary issue of smoking restrictions. The topic, a local flash point more than a decade ago when smoking was outlawed in bars and restaurants, flared up again with the Central Health Equity Policy Council's proposal to eradicate cigarette smoking on patios of those businesses. Unsurprisingly, since the news broke in this column a month ago, music venue operators have emerged as the loudest voice of opposition to the anti-smoking initiative.

Club owners worry that another ban will tank attendance at destination spots already scraping to survive in an expensive market, while also creating logistical problems when concert-goers flood onto the sidewalks between acts to satisfy a nicotine fix. Prior to the proposed legislation coming to light, the tax-funded health organization hadn't engaged Austin's live music stakeholders in discussions, instead quietly seeking the support of politicians. Council Member Ora Houston recalls meeting with representatives from Central Health in May.

"I told them they needed to talk to the people it impacts before going to Council," says Houston, whose District 1 includes several smoking patio-equipped music venues like Sahara Lounge and Skylark Lounge.

Controversy sparked, Central Health met with ATX Music & Entertainment Division head Don Pitts, who related the experience in his department's newsletter, writing that the two parties discussed: "How we can partner in exploring the possibility of implementing some of their educational programs within our music ecosystem that would not involve legislation that would impact the economic health of our already struggling live music venues by prohibiting outdoor smoking on patios and outdoor areas of venues."

Translation: "We'll help spread your message, but a patio smoking ban is off the table."

"Their perspective is they want there to be no smoking in public. I think that's their stretch goal," says Cowan. "They're talking about people making healthier lifestyle decisions, but our position is that employment is a prerequisite to making healthy decisions, so we would rather people have jobs."

Fundamental disagreement, he furthers, centered on whether expanding the 2005 smoking ordinance that prohibited smoking indoors would be of added community benefit or simply prove culturally destructive.

"The policy is already there. We've been living with it for a decade," points out Cowan, who also represents the Red River Cultural District merchants' association. "We adjusted to it by building patios and options for outdoor serving of both smoking and nonsmoking customers. Most new bars modeled their business around that. I don't see how this can do anything but hurt us and we're already in rough shape."

Venue owners nevertheless agreed not to engage the tobacco lobbyists who've been eager to talk since news of the proposal broke. Also discussed: no vaping indoors, banning the sale of cigarettes in venues, and informational signage about smoking cessation options. Even those negotiations make Cowan apprehensive.

"My concern is that Central Health's goal is to eradicate smoking piecemeal," he says. "If that's so, then what's this horse-trading about? I'm not convinced that kind of give-and-take will produce results. If they feel that smoking's a social ill and it's their job to eradicate it, I don't know if there's any negotiating in that.

Central Health Communication Director Ted Burton says the dialogue has been constructive and at a time when the organization re-evaluates the proposal.

"The Health Equity Policy Council thought it made sense to tap the brakes on their efforts to amend the ordinance and continue the dialogue with business owners, musicians, bar and restaurant workers, and other community members," he said. "Then, together, they'll map out a way forward."

For the new smoking restrictions to be written into a law, a council member needs to sponsor the proposal followed by a three-fourths majority vote. Burton says they've not confirmed a sponsor yet and there's no current timetable for the legislation. Indeed, it's difficult to appraise council support. Pio Renteria, whose District 3 includes patio'd venues including Hotel Vegas and the Hard Luck Lounge, remains undecided on the issue, according to a staffer. Kathie Tovo, whose District 9 covers the Red River Cultural District, ignored an interview request.

The smoking-ordinance amendment is the debut project from Central Health's Equity Policy Council, comprised of 60 community members, which formed last year with the charge of advancing health equity for Travis County residents. The controversy over the policy puts the group in a pickle. Reneging on their proposal's main component could make them appear ineffective, while staying the course could cast them as indifferent to the concerns of the music community – who they serve via funding from music-centered health agencies SIMS and HAAM.

Shannon Jones, director of the Austin/Travis County Health and Human Services Department, says his staff provided the Equity Policy Council with information regarding the health impacts of tobacco use in Travis County throughout the last year.

"What data indicates is that tobacco has a significant impact, in terms of being the leading cause of death in our community, but I emphasize it is not the only one," he says. "There needs to be, from my perspective, a balanced look at overall health and factors contributing, and not just a single one. One of the things we see here in Travis County is obesity – particularly among young people – caused by lack of exercise and lack of access to healthy food.

"We would encourage Central Health looking at that area as a priority for policy implementation in addressing the overall health of the community and not single out just one significant factor."

Jones says his department was instrumental in working with City Council toward the 2005 indoor smoking ban and, since that time, tobacco use has gone down significantly in Travis County. For Council Member Houston, regarded for representing the interests of Austin's minority populations, Central Health's painting of the patio smoking ban as a way to protect minority workers is disingenuous.

"They raised it up as a primary equity issue, but the equity issue for people of color is access to health care," she says. "There are no primary health care providers east of Airport Boulevard. So they wait until they get sick and then take two buses to the emergency room. This issue of banning smoking on patios and e-cigs, I understand their concerns because smoking causes health problems, but it's not the main concern for my district and it's not something the community is talking about.

Houston, an ex-smoker who now avoids smoky areas, would prefer to see a solution based on voluntary compliance.

"If I don't want to see music in a smoky area, I won't go there," she says. "Are we going to say we're going to ban smoking in Austin? It's already no smoking in bars. We're now talking about legislating behavior." 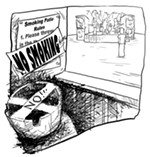 Playback: The Return of the Austin Smoking Ban
A decade after the initial smoking ban, local health group hopes to stomp out smoking patios