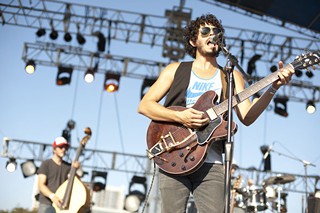 
For a man as seemingly relaxed and understated as Howe Gelb, the musician who records under his own name or with the rotating musical combo Giant Sand, he's a workaholic on paper, releasing music almost without cease since first appearing in the mid-Eighties as Tucson's answer to the blossoming alt.country movement. With Giant Giant Sand, Gelb's enlisted old and new collaborators to make and tour behind this year's "country rock opera," Tucson. GGS performed a democratic set featuring several vocalists taking turns on lead, and with numbers jumping across genres including lounge, zydeco, hard twang, and even a couple songs boasting pure Mexican DNA that brought a little Pachanga to Auditorium Shores. While not every festival set can or should be a rager, Giant Giant Sand's slot was mellow to a fault, with stand-up bass, trumpet flourishes, and muted percussion making them an odd duck even on a festival bill that radiated diversity. For the patient, the band made small magic onstage, but its quietude ultimately meant they were more a crutch than a boon at Fun Fun Fun.