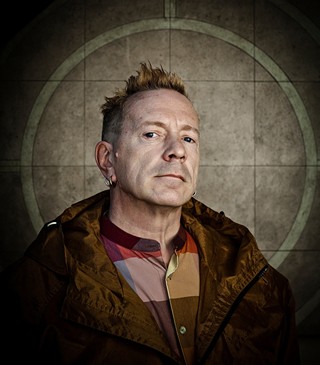 John Lydon was born on an island. That's what defines him. Not how he spat on mediocrity with the Sex Pistols. Not the weird excursions into celebrity TV, or even when he became the unlikely spokesman for Country Life butter.

Islands leave you nowhere to run, so you've got to fight or submit. Islands are places of ports and travelers bringing new ideas and strange adventures. As a fellow Brit, I hear the ebb and flow of the sea, both barrier and route to great escapes, in Lydon's music and voice.

Now he returns fronting Public Image Ltd, a blending of postwar fury, dub flow, cosmic sparkle, and folk heart. Like the latest album declares, This Is PiL. PiL is Lydon. And Lydon is PiL.

John Lydon: Where are you calling from?

Austin Chronicle: I'm in San Francisco at the moment.

JL: So, that's how you squeaked in as an Am-erican interview? Aren't we the clever bunny?

AC: Nah, I'm Texas' token Englishman at the moment. So, I was wondering, why reunite PiL at this point?

JL: Listen, it's obviously clear that PiL has been the love of my life, always. It's the first time I've managed to express myself completely freely outside of the shackles and restraints of what you would call pop music. I learnt to write songs in the Pistols, that was great and I loved it and I loved being in that band, but there was more to me than that, and when the Pistols folded, PiL started. But then PiL got into an incredible situation with the record companies – of debt and lack of promotion – and then I found myself in this quagmire for two decades of being unable to write or record movies because of outstanding financial debt, and it took me a long time to find a way out of that. I finally did. I found, I found the resolve, and it was called butter. And thank God for British butter. They backed me totally. They gave me a free hand and let me do what I wanted to do with the promotion campaign, and I think I did very well. Hang on, there's a police car.

JL: That's the sound of the beast. Woo woo! So I invested the money immediately back into reformulating PiL in the proper way. And it occurred to me that I only wanted to work with people that were really of any value.... Now it's taken me, what, 35 years to achieve this? I always thought being in a band meant you didn't have to get along with all the fellows in it. Well, that's wrong. These are my best friends, and the songs show it. The way we work, the way we respect each other, the way we perform live, the way we feed off each other's energy, the way we improvise and take the songs into so many different directions, the way we trust each other, the way the band won't lay booby traps for the singer, and the way the singer won't booby trap a band – there's a total respect and love going on in this. There's an album called This Is PiL, and by God it is.

It's everything I always wanted PiL to be. PiL was always a brilliant, brilliant piece of performance, but now it's excelled even on itself. It's a love of humanity, the way we deal with the song subjects, what the subjects mean to each and every one of us, the interactions between words and notes. That's all part and parcel of a bigger picture. That's what we do, actually. We paint with music. In the past, it's always been very hard recording. I've never given any time to myself as a singer. I've just laid down the vocal and thought that was that. I've taken more time now, training and learning how to use my voice as a proper instrument. And although, yes, I'm still down to one take, I spend a lot of time thinking about that, rather than trying to make space for people that are underachieving.

AC: What was the epiphany, where you realized that you didn't have to have an antagonistic relationship with your bandmates?

JL: Let's begin. Look where I started. You can hardly call that creative management. Really, the word destructive would be more poignant. And that band resented me because I wouldn't toe the line. Half the band wanted it to be like the Bay City Rollers, the other half wanted to be superstars, and none of them could write a lyric. We're not off to a very good start, and one thing leads to another, and everyone resents creativity, so where do you go? Well, you get more creative. Every single word I've written is factual truth, and from the heart, and the value and experience of that – there's a poignancy to it. If you don't want to hear it like that, then I recommend Coldplay and Radiohead. You're more than welcome to vacuous personifications, but I'm a little bit different. I come from something, represent something. I live something of value. It is all about the sharing.

AC: It always struck me that PiL were a definitively British band, which comes from your experiences growing up.

JL: Without the working class, there'd be no PiL. Period. It's a working class experience. Total. It couldn't come from anything else.... Then I look at America, which is where I live, and I am frightened of what the right wing are putting up here. It's the most insane lack of defense for absurd stupidity. I've never seen anything so bad as the Romney campaign, and yet there's every possibility that [they] might just win. And it's really, secretly, truly based on racial prejudice. The running mate Romney's just picked, he backed every single one of George Bush's philosophies that put America into such a calamity, and yet he's preaching God knows what and being presented as an intellectual. I'm watching that from abroad, and I'm terrified. I can't wait to get back to America, get on TV, and put something correct here.

And yet it shouldn't be my job. I'm just a bloody pop singer, but I can't see anyone else doing it, or saying it like it really is. That's a dilemma for me. I can't figure it out. I don't want this. I look at who votes Republican, and here's the problem in America: They've all got long hair, spandex tights, and play in heavy metal bands. Every single one of them pigs is a Republican. It's all about greed: 'This is my money, you can't have any, and fuck the rest of the population.'

The very people that need health care, that need heart transplants and cancer treatments, they tend to vote for these twats that are roping them out of perfectly valid medical care. It shouldn't be a privilege. It's a requirement that you be taken care of. No country is ever worth anything if it doesn't take care of its population. For me, one of the greatest things achieved in history is the British National Health, and the Tory party is trying to dismantle it.

So I'm torn. It's two cultures I'm fighting for. Is it communism I'm spreading? I don't think so. I can't bear the thought of children dying because their parents don't have enough money.

JL: It's values. Let's leave morals out of it, because that implies a religious aspect, which I'm very far removed from. I value the life of every single one of my fellow human beings, and I cannot bear the thought of one more extension on the [military] wing rather than five or six cancer children living. It's not worth it for me. I don't collect money that way, I never, ever will. I don't need it. Now bear in mind I come from the slums. I'm one of them working class myself. I know what it's like, and I know how hard it is to get out of it. None of us deserve death because we lack the money. None of us. So there we go. This Is PiL. Do you reckon I'll be able to flog an album in this environment? Good fucking luck. 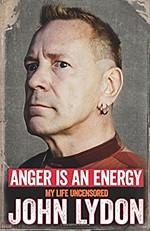 Anger Is an Energy: My Life Uncensored
Johnny Rotten's second autobiography picks up from the Pistols' demise and pistons into the present