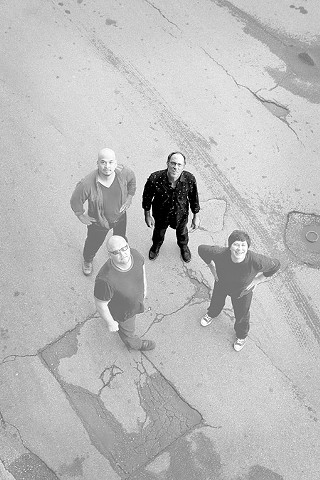 David Lovering is the grounding rod of a band whose alternating currents proved distinctive enough to define an entire era of rock. As you might expect from someone whose youthful passions were music and electrical engineering, the Massachusetts-born Pixies drummer tends to describe the band's sonic output in terms of method rather than emotion. After the breakup, Lovering served short stints with Nitzer Ebb and Cracker before putting down his sticks to become a magician.

Austin Chronicle: Prior to the reunion, you didn't play drums for a long time. Given the physicality of performing, how hard was it for you to get back up to speed?

David Lovering: When we broke up back in '93, I played in a few other bands and did some session stuff, but then I resigned myself to the fact that the Pixies was the best thing I could do. I can't top this in any way. So I just gave up drums. And I hadn't played them in – jeez, it was like 10 or 11 years.

I remember the first day we got back in the rehearsal studio. The kit was there, and I sat behind it, and it was the first time I realized what a stupid thing I'd done. I realized the drums were something I really loved, and I couldn't believe that I gave it up after all those years. I still feel that way. What a stupid decision I made not playing.

When we started playing, though, it was so easy. Everything just came right back. The only difference is the physicality of it, just getting my stamina back up again.

AC: What's the most distinctive thing about Kim Deal's style as a bassist and how it fits with yours as a drummer?

DL: When I started playing with the Pixies, I paid attention to the bassline because the rhythm section should be locked on the same thing, but I wasn't that great at it. And as the years went on, I started paying much more attention and trying to cop some of the lines she's doing off my kick drum and stuff like that. Nowadays, with all the playing that we're doing, we're much more locked in. I think we're playing a lot better together. I'm watching and playing her parts, which I think she plays great. I love all the bass parts, and hopefully I complement them. Also, Kim's watching me. Especially my hi-hat. I've learned I better keep my hi-hat in time rather than my kick drum because she's listening and watching that. That better be spot-on.

AC: Does your background in science and electrical engineering inform your musicianship?

DL: I think in a way, yes. Plus I get migraines, and when I get them, I get all this data in numbers. I get all this information just rolling in my head for like nine hours ... endless. And I think because of that, and my interest in math, it helps with my drumming and the timing and the tempos and things like that. So, yeah, I think it plays big as far as keeping a pace and a timing and a tempo. I think it definitely helps.

AC: I've never heard migraines described quite that way before.

DL: It's bizarre. I can be in pain, but you just can't shut off your mind. Just rolling numbers and equations. I can't tell you how bad it is. To bang my head on the wall would be better than the feeling of having that.

AC: Have you gotten any feedback from fans or the press in the wake of your decision not to play in Israel this summer?

DL: Not so much with the press. The only thing is the fans. We've had loads of Israeli fans that are just pissed off. It's a tough situation. Hopefully, as we've explained, we're going to get back there and do it for real.

DL: When I'm on the road, it takes a bit of a backseat. I just do close-up or social magic backstage or in restaurants or wherever I am on the road, but I'll start up the full-on regular routine when I get back home again.

Double Bliss
A day in the life of 'Austin City Limits,' season 30