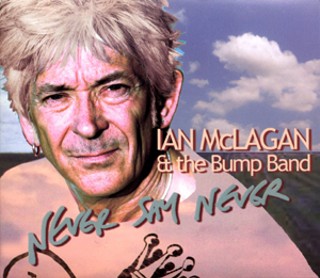 
Misery loves company, but on Never Say Never, Austin's adopted homeboy Ian "Mac" McLagan doesn't want your pity. He wants you to join him for a pint and some old-fashioned reminiscing. Following 2006's Spiritual Boy, a masterful tribute to his late friend and bandmate Ronnie Lane (1946-1997), the famed keyboardist was visited by additional tragedy that same year when his wife, Kim, was killed in an auto accident. With this contemplation of love's eternal flame, Mac finds solace amidst the ever-comfortable groove of drummer Don Harvey, guitarist Jud Newcomb, and bassist Mark Andes, who compose the Bump Band. Heartbreak bleeds through starting on the title track, one of four numbers featuring local chanteuse Patty Griffin on backing vocals, but the band shakes off the shackles of sadness with the Stones-like stomp of "I Will Follow" and "I'm Hot, You're Cool." Mac ripples a meditative vein on "An Innocent Man," singing, "I haven't made any wishes lately, and it'll be a long time till I can." The piano-driven skiffle of "Killing Me With Love" offers a lesson in Beatles harmonies, with tender closer "When the Crying Is Over" (guesting Griffin and Tosca Strings) sounding eerily like a Lennon composition. Considering Mac's credentials as a first-wave Britpopper (Small Faces), beginnings and endings remain a never-ending cycle of celebration.