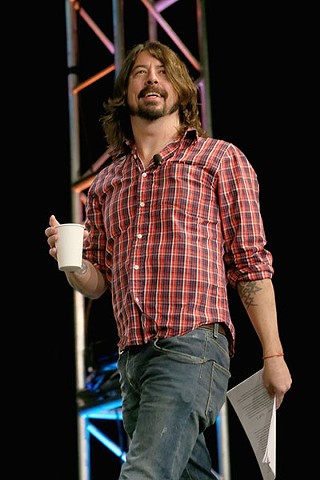 
As Foo Fighters' frontman and former Nirvana drummer Dave Grohl made clear during his keynote, he's not your father's rock star. That would have been Bruce Springsteen, who last year shared that his early influences included the late Roy Orbison, the still-recording Eric Burdon, and Motown. On Thursday, Grohl listed influences such as Bad Brains, Minor Threat, Black Flag, the Dead Kennedys, and Discharge. He also mentioned the Boss. "I congratulated him on last year's amazing keynote," Grohl smiled, dressed in a red flannel, glasses perched on his nose, his shoulder-length hair clean and relatively kept. "And then I told him this year's keynote speaker was me. Then, he started laughing – at me. As if to say, 'Good fucking luck, baby.'" Well, Grohl, who spoke eloquently about wandering despondent in the creative wilderness after Kurt Cobain's suicide, didn't need luck. The now 44-year-old singer/guitarist/drummer, embracing the role of elder statesman, also held out hope for the young dreamers in the crowd. "[They] asked us, what do you want? And Kurt said, 'I want to be the biggest band in the world.' I laughed. How Kurt thought we would make a ripple in this world of polished pop was beyond me."