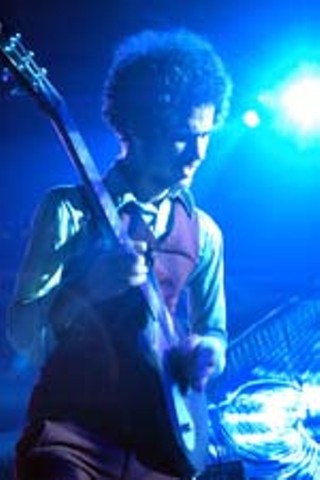 Fuck prog. Fuck prog and all its illusions of wizardry and mythical battles. The Mars Volta get labeled "prog" a lot, but instead of backsliding into its heady heyday, the Seventies, they're actually progressive, which is, ya know, what it should really mean. That said, their latest album, Frances the Mute, is a tough listen, jaunting from Latin rhythms and hernia-inducing vocals to long stretches of lysergic guitar trails and creepy wah-wah splatter. It's loosely based on the journal of an adopted boy, and the lyrics require a dictionary and bong close at hand. Live, Omar A. Rodriguez-Lopez and Cedric Bixler-Zavala, the two 'fros from El Paso's At the Drive-In, forgo the storyteller role and step onto the helm, battling a psychotropic maelstrom of sound. It's as though they've tapped into the exploding plastic id of a 14-year-old boy – all primal aggression and detached emotional mindfucking. From the moment they walked onstage during a squall of feedback to the moment they skipped offstage two hours later without an encore (none was needed, ditto for an opener), TMV played tug-of-war with us and one another, incorporating Santana-esque percussion corps, horns, wind chimes, wanky staccato guitar skronk, and innards-rumbling low end, all zoomed through Rodriguez-Lopez's face-melting soloing. The black-clad Zavala paced and shimmied across the stage as his foil made his guitar stutter, scream, and whimper. Songs flowed seamlessly, and though there were watch-checking moments of Super Wankery, they always lured the sold-out throng back in with a head-snapper ("Roulette Dares," "Drunkship of Lanterns"). The Mars Volta has a terrific work ethic: Quantity never outshines quality. They could probably record their next album in a hollowed out tree in New Zealand. And as a prog-ressive band, that shouldn't be a problem.