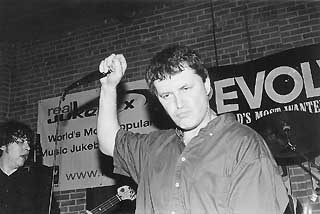 It's always a bit hit or miss with Daniel Johnston, and though an intrusive cameraman buzzed too closely around him, he played a short but untraumatized set. Pulling songs from his spiral songbook, he remained ever professional, never reverting to his Beatle security blanket. Visiting Brits from Departure Lounge and Gomez looked perfectly giddy at hearing pop at its purest, cleverest, and most truthful. Charmed by songs from Fun like "Love Will See You Through" and "Silly Love," the visitors rushed to drop a tenner on the only CD Johnston was offering, Danny & the Nightmares. As they took the disc from the man, Johnston reportedly sang to himself, "We're in the money ... ." Playing gentle, mid-to-late Sixties psych-pop, Beachwood Sparks were jazzy in their vintage Western shirts, the drummer stylishly sitting up high, playing a sparse kit down low. Waiters carried hors d'oeuvres, causing a band member to mumble, "This is kind of awkward -- kind of shrimp-cocktail-y." An L.A. band with a Kinks/Byrds vibe, the Sparks had a residency at Spaceland, the trendy Silver Lake club, which may explain a Beck friendship and the presence of Elliott Smith at the party. Speaking of parties, Revolver magazine's big Saturday afternoon shindig at the Millennium Hall across from Ruta Maya welcomed the rockinest pop band around: Guided by Voices. Chants of "GBV!! GBV!!" welcomed Robert Pollard and company, rock theatrics like pursed lips, mike chord windmills, pumping fists, and rock leaps -- all executed by a middle-aged man in a navy button-down shirt. Displaying proper old-school rock etiquette, Pollard introduced each song and placed its album of origin. He named "Oh Tropical Robots" in a British accent, and sang the song title, "The Surgical Focus," as if he were his own biggest fan. After "Pop Zeus," he explained that the band was "a bit inebriated," and admitted, "We're the very favorite band on TVT, but hey man, we paid our fucking dues." After the fantastically named, "Psychic Pilot Clock Out" he apologized to SXSW for "having this little party without them," adding, "Hey, man, you scratch my back, I'll scratch yours." This sentiment reflected a comment he made at a party the day before, mentioning that SXSW was probably mad at him for not playing the conference, but the money for the Revolver party was too good to pass up.