Hole in the Wall, Wednesday 14

Even though it's the big showcase, it looks like it's going to be a typical night for a pop band in Austin -- all dressed up and no one to play for. If memory serves, the last two Austin bands of this ilk (stylish, swaggering, song-centered) and caliber (awfully, awfully good) also played to big, empty concrete floors. Magneto became Fastball and sold a record or two, while Cotton Mather became the pets of Oasis and sold out a club or two in the UK. Thus, one must believe that good will eventually prevail. The Love Supreme opens with "I'm Alright," the lyrics of which reveal the key to the band's performance: "If I keep selling this to you, it might come true." The Love Supreme engage in a sort of rock & roll make-believe, fueled entirely by their own conviction. As lead singer Noah Lit delivers this line he struts and preens, while somehow remaining entirely blasé. If brown is still the new black, Lit is the epitome of fashion, even donning the red-fade, coke shades as naturally as can be done at night. I've said it before, and I will continue to say it until every last band on earth gets it together: The right trousers, haircuts, and girlfriends are the key to a pop band. That and a stellar songwriter. The Love Supreme have it all, though, at this point, only a handful of songs that are structured enough for American radio ("Nothing but Blue Skies" or "Atmosphere"). The bulk, however, are a bit more grand and -- dare I say it -- groovier, though not in that muso Dave Matthews sense, but in a Led Zeppelin sense (and I make that comparison only in the most un-bluesy and British of contexts). Follow? Perhaps not. Actually, in the end it all comes down to Suede, cause that's who the band most closely reflects live. Their torch ballad, "Funny Music," showcases this penchant as well as Lit's terribly competent, immense rock vox, and the guitarist's affinity for Mick Ronson. By the second song the music has lured folks out of the seated front end of the Hole in the Wall into the back, and they seem to be buying it. This small victory can be attributed to the band's confidence in their playing and songs, but probably even more so to -- god, am I actually saying this at a SXSW gig? -- the sound, which is outrageously good. Every harmony, every mellotron part, every aspiration is discernable. With a lesser band, that might accentuate flaws best hidden behind a bad mix, but with the Love Supreme it merely gives them command of the room and suggests where they really should be playing -- big stages, baby, somewhere, somewhere in a field in Hampshire. Alright. 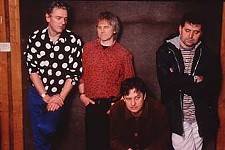