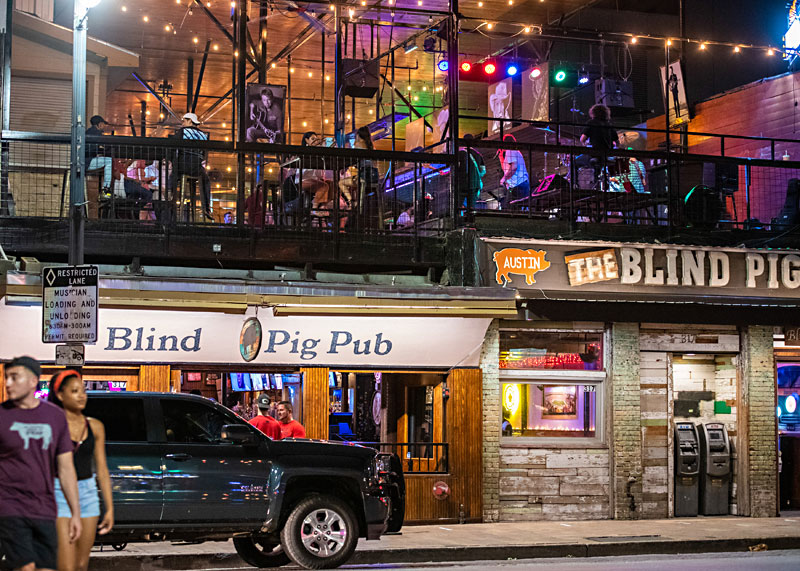 The Blind Pig, a Bob Woody property on Sixth Street, reopened on May 22; Gov. Abbott's executive order on June 26 once again closed down bars as COVID-19 cases continue to surge in Texas. (Photo by David Brendan Hall)

June 2020 may be the most turbulent month Austin's bar scene has ever endured. The desperate, dire balance of economic survival and public health played out like a malfunctioning roller coaster with incremental reopening, employees contracting COVID-19, and the Texas Alcoholic Beverage Commission punishing establishments flouting social distancing rules. Ultimately Gov. Greg Abbott stopped the ride, handing down an executive order on June 26 ceasing operation of all bars statewide for the second time since mid-March. By then, the harsh realities for all involved had already come to light.

"I can't think of a bar on Rainey Street that doesn't have sick staff," a bartender who works on the strip told the Chronicle on June 20. "I doubt there's a bar Downtown where someone hasn't tested positive."

“I feel like I’m waiting to get sick.” – Rainey Street bartender

That individual felt "forced" to return to her job in June, because the state's unemployment administrator, Texas Workforce Commission, offers scant exceptions for those who've been offered work. While her employer maintained fair practices, she knows colleagues whose bosses have handed them COVID-19 liability waivers and she has watched bars with staff infected with the virus stay open despite recommendations to close for disinfection procedures.

"I feel like I'm waiting to get sick," she said.

Another source was so uncomfortable with how Austin bars were handling the pandemic that she quit her job as a brand representative, a position that daily visits multiple bars and liquor stores. "There's been bar managers instructing employees 'Keep it quiet. Go quarantine, but don't tell anybody you got sick ... even your co-workers,'" said the source, who was confirmed COVID-19 positive at the time of the interview on June 23. "When someone tests positive, it's business as usual. The public's not alerted, and the rest of the staff isn't instructed to go test."

She considers it an especially problematic situation because service industry workers are largely uninsured.

An employee at a fine dining restaurant in the Domain, who contacted the Chronicle last Friday, only found out about a co-worker's positive COVID-19 diagnosis through word-of-mouth. He says that the establishment had not enforced mask wearing and only after he repeated concerns to multiple levels of management did they address the staff about an in-house illness.

"It definitely makes me question whether or not I want to work for someone who's not prioritizing my health – as well as the safety of guests," he said. While getting pre-screened for a COVID test, the nurse informed him that the Domain has been a local hotspot. "The girl who tested positive is in a small group that, as soon as they're done working, goes out and parties at [multiple nearby bars] without wearing a mask."

That echoes a notion from the Rainey Street bartender about how COVID impacts clusters of businesses: "People in Austin, they don't go to bars. They go to districts."

The operators of Eastside bar Latchkey waited an extra 10 days to unlock their doors after reopening commenced after the governor's controversial "Open Texas" order on May 22, permitting bars to open at 25% capacity (which then increased to 50% on June 3 and 75% on June 12). On June 1, they cautiously launched with patio-only seating, socially distanced tables, and contactless ordering. Six days later, a staff member's roommate – an employee at a different bar – was diagnosed with COVID-19 and Latchkey shut down again, issuing a notice to customers, which they reiterated on June 8 when his test results came back positive.

That notice laid out a stringent, self-imposed reopening framework. In addition to deep cleaning, all employees would have to produce negative results on multiple tests. Latchkey ended up being closed nearly two weeks.

"We looked at the two extreme options," outlines co-owner Adam Morgan. "If we stay open, don't tell anybody [about the positive cases] – money would have been the benefit. But what would've been the worst case scenario? What if someone is sick and it's not caught on that first test? What if they infect our customers? What if they go home to their grandparent? It's immeasurable how bad it could be. If we're going to beat this thing as a community, we have to make tough decisions."

Shutting back down was a "big financial blow," Morgan admits. Many other establishments endured the same, while others swept COVID infections under the rug.

"We know of cases where managers and staff, like more than four or five, have tested positive and the bar never shut down," Morgan said on June 23. "Most are not having sick people come into work, but I don't think even the majority is telling the rest of their staff or having testing. It's frustrating."

Much of the public denigration for establishments with outbreaks played out on service industry social media pages. Kc Hensley founded the popular Facebook group In the Weeds and now serves as a consultant to the current owners, Seasoned. He says they've had to adapt the forum moderation to ensure those calling out bars and restaurants for covering up instances of COVID-19 had evidence or a secondary source.

"In the Weeds is in an interesting spot because it's a place where people can alert others within the community so no one else puts themselves in danger, but on the other hand, without sufficient evidence of wrongdoing, some of these businesses are getting blasted and misinformation has spread," he said. Hensley points out that bars aren't legally – only socially – expected to inform employees or their customers about coronavirus occurrences. Separately, he notes how hard it's been for them to deal with customers uncaring about virus prevention.

"I'm reminded of a Mike Tyson quote: 'Everyone has a plan until you get punched in the face,'" he says. "The bar owners, the staff, they all have a plan – they mean to protect people, but they're getting punched in the face by the public who are coming in and choosing their own rules."

Indeed workers at the Austin bars that actually tried to enforce masking and social distancing spent the reopening month surrounded by customers who, at best, were adjusting to new policies but, often, were ambivalent.

"I try to go about it in a way that doesn't demean anyone but is forceful and keep rules in place," explains Coconut Club Manager Joseph Aguirre. "For the most part, people do it, but there are people who push back."

On June 12, Aguirre asked a patron three times to put his mask on – as per the policy for all patrons of the Warehouse District's club – with responses varying from eye-rolls to outright defiance. The manager explained, "If you can't follow these rules, you're too intoxicated to be here and need to leave," but the customer ignored him and went into the bathroom. When he came out Aguirre again asked him to leave and attempted to escort him out. "This person immediately starts throwing very inebriated punches," he recalled.

In the assault, Aguirre had his glasses broken, his nose cut, and his face spat in. He reluctantly called the police and gave a statement, but officers let the attacker go. "It's another level of operations to do," Aguirre says of dealing with indignant anti-maskers. "And it's taxing."

Meanwhile, some bars hardly feigned enforcement. Between June 20-22 the TABC handed down 30-day permit suspensions to four Austin establishments that broke rules on capacity limits and/or distancing between groups (based on alleged violations of the governor's Executive Order GA-26, which coincided with the Phase 3 plan issue on June 3). The bars popped were Soho Lounge, Whiskey Tango Foxtrot Icehouse, the Bob Woody-owned Buford's Backyard Beer Garden, and the W. Sixth Street iteration of infamous circus-themed bar Unbarlievable. This action prompted a nonsensical nationalistic online meltdown from Unbarlievable owner Brandon Cash, who has been in "hot water" for his overtly racist social media rants for years.

In contrast, Whiskey Tango issued a public statement announcing their hearing request: "Like many small businesses, Whiskey Tango Foxtrot Icehouse has struggled to survive in these trying times; however, the State has decided to further jeopardize our survival by over-reaching [sic] and penalizing small businesses for the individual choices of their patrons and their rights. Whiskey Tango Foxtrot Icehouse has more than 50 employees and contractors who rely on their jobs as bartenders, support staff, security, and musicians, as well as bookkeepers, cleaning staff, vendors, distributors, food trucks, and many others who rely on us for their livelihood. Whiskey Tango Foxtrot Icehouse respectfully requests the Governor to reconsider this onerous and excessive penalty for businesses acting in good faith to follow the guidelines. We urge the Governor to work with us and other small businesses to avoid closing down the economic livelihoods that are vital to so many."

According to a Facebook post, Whiskey Tango Foxtrot operators successfully appealed their suspension and planned to reopen on Friday, June 26, which became the same day Gov. Abbott ordered all bars to close in the Executive Order 28 mandate that closed bars again.

Nathan Hill called the decision of when and how to reopen a bar an "impossible choice." The entrepreneur, who co-owns the White Horse, Stay Gold, Frazier's Long & Low, and High Noon, had been meeting with partners on a weekly basis to determine if it were worth it to accept the risk of reopening and what steps could be put in place to mitigate that risk most effectively – all in hopes to merely stop the bleeding of continued rent and bills.

"That's what the impossible choice is: If we don't return to work now and put ourselves at risk, we may not be able to return ever," he explained.

With procedures laid out to make his businesses the "safest place [for] any customer or employee to walk into," he had just decided to begin reopening when Abbott's bar ban came down.

"So because of the arrogance and idiocy of guys like Bob Woody and Brandon Cash, who are already reviled by the bar owner community, we all must pay the price," Hill stated. "What was an impossible choice has now become an impossible scenario without choice. While many of us responsibly opened or waited until we felt we could responsibly open, spent money we didn't have on Plexiglas barriers, sanitation stations, and outdoor seating, a select few assholes chose to ignore the severity of the situation. Now here we are, faced with mounting bills, taxes, and rent entering another forced closure. This will be the death knell of many more bars.

"The irony is that the Bob Woodys of the world will make it through this, and when we reopen, they will profit off the shuttering of their competitors who don't have the capital to stay alive." Hill also takes umbrage with Abbott's distinction between bars and still-open restaurants, given that bars where patrons are seated and order remotely are effectively the same.

"Abbott told us to get open to these levels," he recounted. "We see the numbers go up, which anybody who's paying attention knew was going to happen, and instead of acknowledging that we opened too fast and too soon, he's scapegoating young people and bars."