pdf
ON THE COVER:
Lights, Camera, Safety: Film and TV Production Is Coming Back to Texas
WE HAVE AN ISSUE:
Ready to Roll?

Right Now, COVID-19 Is “Spreading Quickly in an Uncontrolled Fashion”

All of a sudden, is it too late?

Austin at Large: Every Day is Juneteenth

Yes, freedom is worth celebrating. But it also bids us to do some serious reflection.

Time to take COVID matters into our own hands

AISD Hears Loud and Clear: No Cops in Schools

Austinites call for schools to defund its police, too

As the D.A. Delays, Michael Ramos' Killers Remain on Duty

The Ramos probe plods on

ACC Is Almost Entirely Online and Students Are Enrolling in Droves

After 23 years, the State Board of Education might be ready to make some changes Who will reign supreme in the Austin pizza galaxy? Vote now!

Gov. Abbott extends waiver in hopes of providing relief for businesses during pandemic

Local trio finds the fire of the jaguar

Our favorite albums, videos, and performances

Lights, Camera, Safety: Film and TV Production Is Coming Back to Texas

Now producers and unions are making sure no one gets sick

Troublemaking in the time of pandemic

The ABCs of lockdown filmmaking

“The plan is to get a plan”

“Grab what you need from the trailer, we don’t know when we’re coming back”

"I have a mask, and 70% ethanol to wipe everything down"

"We have more pitches and more interest than we ever have had.”

“If you're not comfortable wearing a mask, you won't be on set."

“I’m lucky to have two movies coming out. I can’t complain too much.”

"Everything keeps sliding. End of June, Fourth of July."

Social media is the real horror here. Wait, no, it's serial killers and ghosts.

The life of the indefatigable civil rights champion

This solo exhibition asks, What happens when shapes run away to join the circuits? We Have an Issue: Ready to Roll?

The film industry prepares to reopen during a pandemic. Plus: How to be a true patriot this Fourth of July.

Greg Abbott and Mike Morath have put Texas schools in an impossible decision: shift to online learning, which is not as effective, or put students and families at risk by returning in the fall.

Qmmunity: An Ode to Janna Zumbrun

In praise of our queer elders

Man-made cave part of “Art on the River”

Waiting for an answer that may never come. 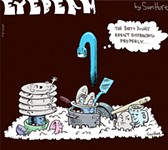