Rainey Street bar Unbarlievable is under fire after a series of racist and misogynistic posts allegedly made by owner Brandon Cash have resurfaced.

The alleged posts were mostly made in response to negative reviews on Facebook, Yelp, and Google. One appears to show the owner’s comments in response to a Google user’s one-star remarks* about drink quality. The owner's language does not appear currently on the Google review site, but several social media users are circulating a screenshot that appears to show an inflammatory and racially charged reply. 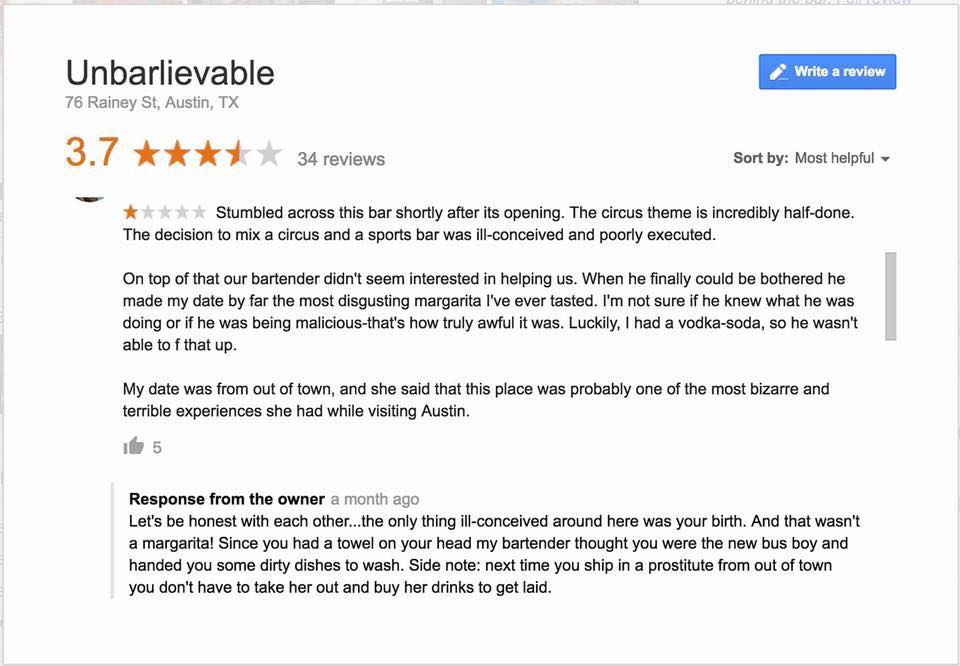 Although Facebook reviews are inactive on the Unbarlievable page and owner comments have been scrubbed from both Google and Yelp, a Facebook page – Unbarlievably Racist Rainey Street Bar – has popped up with a collection of several images that have been circulating over the web. One of the Facebook users (who wishes to not be publicly identified) involved in those images has confirmed the veracity of the screenshot and has provided the Chronicle with a copy of the original thread.

Collectively, the images appear to show a pattern of provocative statements. In one, owner Brandon Cash (whose now-hidden Facebook page lists him as an owner of the Goodnight, Rooftop on Sixth, and Rooftop on the Square) appears to tell a negative reviewer that “I hope you you [sic] don’t have any daughters bc they are definitely gonna get grabbed by the pussy you stupid fucking ant!” In another alleged screenshot, a person identified as Cash says “you were a stupid cunt so that’s what I called you…any questions???” and follows up with a photo of him flipping the bird.

Another screenshot, allegedly taken from Cash's personal account, claims the bar is "looking for a really tan/brown small human to walk around unBARlievable tugging on people's shirts while attempting to sell them chicle." 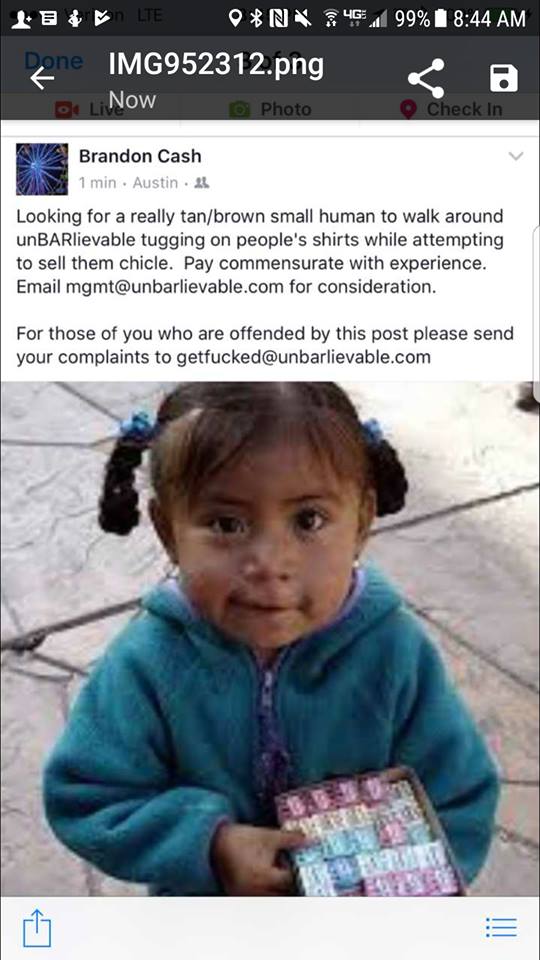 The Chronicle has reached out to Unbarlievable via email and Facebook and will update this post if they respond.

Editor's note: The name of the Google user has been removed at that person's request.

“It is with profound humility that I issue this heartfelt apology. To those who I have hurt and offended, I am deeply sorry. My words and actions were wrong, inappropriate and inexcusable. They certainly don’t exemplify the values of a community that I love and care deeply about and my insensitive actions do not represent the views of my loyal and dedicated employees." “Austin has been my home for over 30 years and I have worked hard to create hospitality experiences that reflect our unique, fun-loving Austin culture and attract patrons and guests who appreciate it. Unfortunately, my own intolerable actions have contributed to a negative environment that has detracted from that culture and vision. I fully realize that forgiveness may not come easily, but I am asking for it and I pledge to earn it. I am going to work diligently to earn back the trust of my customers, my employees and this community.”

The Goodnight also posted a statement on their Facebook page.

"Howdy Goodnight fans, we are very well aware of the recent public relations conflict that a bar on Rainey Street is going through. We have reached an agreement to purchase the remaining ownership of the individual that has a very limited non-operating interest in The Goodnight as of 4pm today. This is heartbreaking for us because we have nothing to do with any other bars or restaurants in Austin. The Goodnight has been in business for nearly 5 years and has always conducted its operations to bring value & fun to our guests and amazing staff. Please refrain from any negative comments. Thank you."

The TABC is also reportedly investigating the bar after receiving an email based on a March incident.