Tweet
print
write a letter
The recent nationwide outbreak of salmonella and subsequent recall of millions of eggs produced at giant factory farms in Iowa for distribution around the country graphically reinforces the wisdom of buying locally produced eggs. The Texas Department of State Health Services announced last week that no eggs from Texas farms were included in the recall. For health, safety, and freshness, buy local eggs at our farmers' markets, at stores that buy from local producers (Ask questions!), and at restaurants that buy local eggs or raise their own, such as Eastside Cafe (2113 Manor Rd., 476-5858, www.eastsidecafeaustin.com)... Last week, the city of Austin Right of Way department renewed the mobile vending permit that allows the Best Wurst (www.thebestwurst.com) to continue operating on East Sixth Street (see "Food-o-File," July 16). Rather than continue a protracted and costly legal battle with the owners of parkside (301 E. Sixth, 474-9898, www.parkside-austin.com) over the contested space in front of their restaurant, Best Wurst owner Jon Notarthomas reached a compromise with the city and will now operate from a parking space in front of 309 E. Sixth, a few yards down the street. The city plans to eventually build out a pedestrian space midblock that will include a bike rack and a concrete space for the Best Wurst cart. While Notarthomas feels validated by the permit renewal and grateful for the outpouring of community support he received over the summer, defending his permit renewal against charges levied by the owners of parkside left him with a pile of legal bills. Some of Notarthomas' supporters have established a ChipIn account where fans can contribute toward the legal bills: www.thebestwurst.chipin.com... Pie man Bud Royer e-mailed with the news that the video promoting Royers Round Top Cafe (www.royersroundtopcafe.com) in the ABC Nightline People's Platelist competition can be viewed and voted for on the Nightline website (www.abcnews.com/nightline) from Aug. 26 through Sept. 26. The contest winner will be announced Sept. 27, and the winner's "Platelist" segment will air in October. Good luck, Royers!... I enjoyed breakfast at two new places this weekend. After shopping at the Downtown Farmers' Market, I stopped for an excellent fried egg taco at One Taco (West Sixth & Nueces next to Little Woodrow's, www.one-taco.com). The service was friendly, and the taco delicious. On Sunday, a friend joined me for brunch at Zandunga Mexican Bistro (1000 E. 11th, 473-4199), the new Interior Mexican eatery from the Torres family of Mi Madre's (2201 Manor Rd., 480-8441). Zandunga is more upscale than Mi Madre's and offers full bar service in a chic urban atmosphere. We had a delightful meal and are eager to return... The Great Food Truck Race continued this past weekend. Austin Daily Press parked near the plaza in Santa Fe, N.M., and sold enough sandwiches to stay in the contest. Once again, the Nom Nom truck from Los Angeles outsold all competitors by contacting local media with a notice about its impending appearance in Santa Fe and making arrangements to set up outside a popular local coffee bar before the truck ever got to town. Smart strategy could take those girls all the way. The remaining five trucks move to Fort Worth for the next round. We'll keep you posted.
More Food-o-File columns

Crackdown
If local eggs are outlawed, will only outlaws have eggs? 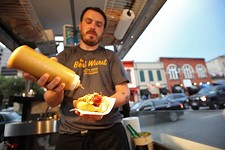