Simmering controversy between two Sixth Street businesses is boiling over 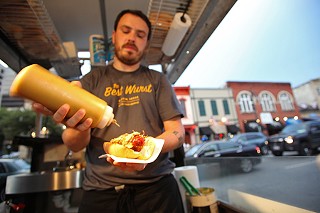 Isaac serves it up at Best Wurst. (Photo by Jana Birchum)

A simmering controversy between two Sixth Street businesses boiled over on the Internet last week before splattering across the mainstream press. Parkside (301 E. Sixth, 474-9898, www.parkside-austin.com) and the Best Wurst (www.thebestwurst.com) mobile hot dog stand occupy the same prime corner of Down­town real estate. The Cirkiel family bought the building at the corner of East Sixth Street and San Jacinto Boulevard to house chef Shawn Cirkiel's casual fine-dining eatery in June 2007. Best Wurst owner Jon Notarthomas has operated a mobile hot dog cart in front of that particular building since 1993. The Cirkiels are now ready to go forward with their long-range plans to add a balcony and a sidewalk cafe to the front of their building – but their vision for the expanded outdoor seating in front of the restaurant does not include a hot dog cart in close proximity. The Best Wurst's $400 annual mobile-food-vending permit to operate in front of the building expired in June, and the Cirkiels are contesting Notarthomas' permit renewal application. Notarthomas pioneered street food vending in the neighborhood and has built a successful business that provides a living for his family and several employees. He has a proprietary attachment to the corner and is understandably distressed at the thought of having to forfeit the income from such a prime location.

Emotional press releases and message board postings are framing this issue as another good vs. evil, quintessential Austin battle of greedy outsiders bent on destroying the cherished weirdness of an enterprising local musician, but that really isn't the case. What we have here is two local small businesses with differing views of each other and competing visions for the ever-changing landscape of the Downtown Entertainment District. Shawn Cirkiel is a talented homegrown chef, and parkside is representative of the diverse mix of businesses both 6ixth Street Austin and the Downtown Austin Alliance are trying to attract to the neighborhood. Recently voted "Best Street Food" in the annual Austin Chronicle Restaurant Poll, the Best Wurst is widely acknowledged to be a model vendor by 6ixth Street Austin Executive Director Josh Allen and Alamo Draft­house at the Ritz owner Tim League, as well as by former neighbor Steve Batlin, operator of Dan McKlusky's, and newer neighbor Nilda de la Llata of El Sol y la Luna. "The Best Wurst is exactly the kind of vendor we want to keep on Sixth Street, and we want Jon involved in the planning about street food vending in the Waller Creek area as that develops," says League.

Notarthomas' concerns are much more immediate, however. He fears that the loss of his permit to operate at the Sixth and San Jacinto location means a death knell for his business as it currently exists. Even though he is a mobile vendor, Notarthomas cannot easily pick up and relocate to another spot along the street. There are a finite number of mobile vending permits for this area, and none are currently available. It has been suggested that he move directly across East Sixth in front of a dance club called Vice, but the permit for that spot is not available on a regular basis, and Notarthomas says locating there would create serious right-of-way issues when the Best Wurst and both the dance clubs on that corner have lines of people waiting for service.

Though Best Wurst has another outlet at the corner of East Sixth and Red River and is invited to serve food at the Austin City Limits Music Festival and at big shows at the new Back­yard, the original location in front of Parkside generates most of the business income. While Notarthomas acknowledges that change is coming to Sixth Street, he thought his longtime residency on the corner and his good reputation in the neighborhood would eventually inspire the Cirkiels to view him as a good neighbor and an asset to their business. But based on documents the Cirkiels submitted to contest the Best Wurst's permit renewal application and Notarthomas' written response, peaceful coexistence under any circumstances seems unlikely. It is a classic situation of value being in the eye of the beholder.

For example, where Notarthomas sees himself as a good neighbor and reliable community watchdog who helps other business owners and the police keep lawless behavior on the corner under control, the Cirkiels see someone promoting a "bad-boy image" in front of their business. Best Wurst customers regularly comment on the "wonderful, awesome" aromas of onions and sauerkraut cooking at the hot dog cart, but parkside customers who dine on the upstairs rooftop deck are reported to complain about the "noxious odors" wafting up from the street. Notarthomas is a guitar player who provides employment for other musicians – parkside hires musicians, as well, and participates in annual benefits for the SIMS Foundation, so that point appears to be a wash. The Best Wurst bills itself as "a cheap eats" option that's an "integral part of the definitive Sixth Street experience." Parkside owners see a nuisance that blocks their front window, impedes the flow of customers into their business, and competes with Shawn Cirkiel's house-made sausages.

Notarthomas' well-orchestrated and emotionally framed public relations campaign has generated plenty of enthusiastic public support. The Cirkiels appear to be ready to weather some bad publicity in order to complete their plans for the building they own. It remains to be seen whether or not staunch public support for the Best Wurst will have much bearing on the permit renewal decision to be made by the city of Austin's Right of Way Management division. Perhaps Best Wurst would be better served by encouraging its supporters to regularly purchase hot dogs at the East Sixth and Red River outlet until another prime vending permit location becomes available. We'll keep you posted. 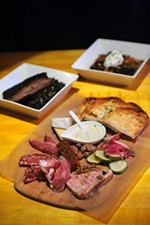 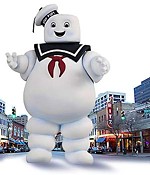 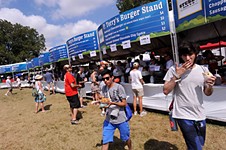 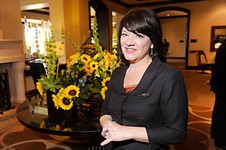