The Impressive Euro-Asian Fare at Bistro 88 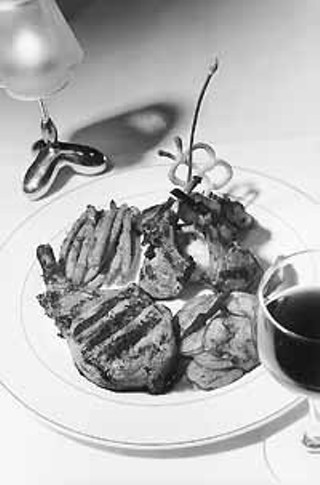 Set as it is in a chi-chi strip mall in West Austin and given its mostly affluent, predominantly non-Asian clientele, it is easy to suspect that Bistro 88 serves -- pardon me if this sounds unbearably politically incorrect -- Oriental food for non-Asians. Hole-in-the-wall noodle shop it certainly is not, but if you deny yourself a trip to Bistro 88 because it doesn't cater to a predominantly Asian crowd, you'll be depriving yourself of some of the finest food Austin has to offer. No fooling. As Bistro 88's growing loyal customer base can attest, one meal at the restaurant, and you're hooked on their unique, self-described Euro-Asian fare. The two recent meals I enthusiastically devoured at Bistro 88, a few minor disappointments excepted, were two of the best dinners I've had in town in some time -- full of fresh new flavors and impressive in both their originality and plate appeal.

Begun in mid-June by a trio of close friends whose alliance dates back to high school, Bistro 88 replaced the short-lived Pacific Moon in Rollingwood. The space is open and airy, with a mixed decor bag that includes folksy metal animal sculptures, a conglomeration of bird cages covered with silk butterflies (the butterfly is the restaurant's "mascot"), neo-Baroque, and some traditional Asian art as well as a fabulous series of contemporary jungle animal paintings. At the table, the decor possesses an odd hacienda feel, with leather sling-back chairs and heavy Nambe-style charger plates set atop the white tablecloths. Yet the menu is solidly Asian/Pacific Rim -- innovative yet surprisingly and pleasantly uncomplicated. Finally, when it comes to service, Bistro 88's staff is knowledgeable, attentive, and nonintrusive, worthy of white tablecloth dining.

Without a doubt, the shining star of chef Jeff Liu's entree menu is the Sesame Shrimp and Scallops ($17.95). The dish provides the perfect example of chef Liu's ability to be at once creative and straightforward. In it, silver dollar-sized sea scallops and large shrimp swim in a voluptuous, practically transparent sesame sauce. Each scallop and shrimp crunches delicately in the mouth, the result of an expert flash-fry job and a light cloak of sesame-seed breading. Inside, both the shrimp and scallops remain moist and pliant. This fantastically simple yet dazzling sauté comes with a generous serving of creamy, roasted eggplant and the restaurant's signature diminutive mound of sweet potato/sweet-corn mashers adorned with a butterfly croustillade. Many entrees also feature a pretty fan of pan-fried yellow squash or a pile of garlic-dressed steamed green beans in place of the eggplant. I can't wait to get back to Bistro 88 and try this dish again. I can already tell that it's become one of those "I've got a craving for --" favorites of mine. 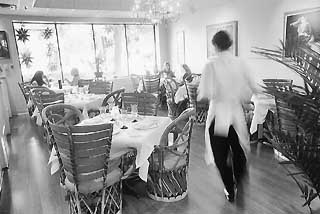 Another example of Bistro 88's creative, if simple, use of ingredients can be found in the grilled seafood special that was available on each of my visits to the restaurant. In it, a buttery, mild sea bass filet is slathered with miso (a fermented soy paste common in Japanese cuisine) before going to the grill. The fish comes off the grill soft and moist, with a unique, earthy punch of flavor and a fabulous, almost crunchy texture on the outside. Chef Liu also does a Rice Paper Wrapped Sea Bass ($19.95) that arrives afloat in a piquant, although not fiery, shallot-wasabi sauce. Yet again, the sauce in this dish displays Bistro 88's imaginative presentation of once-unique ingredients that may indeed be gaining in popularity, but that all too often fall into obscurity because they are blended into an "over-fusioned" preparation. With this sauce, a diner can familiarize himself with wasabi rather than attempt to decipher it from among other "new" flavors. The rice-paper wrap adds another distinctively, if not indispensable, Asian touch to the plate.

Tofu lovers will relish chef Liu's Domino Tofu ($10.95), a stack of slightly crispy tofu strips dressed with a spirited ginger-soy sauce. Black mushrooms and baby bok choy are served as companions to the tofu, and every last bit of the sauce was spooned off of the plate when I ordered the dish.

My only disappointment among the entrees was the Quail With Eight Treasures ($16.95). Although certainly not bad, the quail paled alongside the other memorable entrees I sampled. Stuffed with an herbed rice blend, the birds were a bit too dry to my taste and somewhat bland, lacking the spirit I so admired in the other dishes.

To backtrack to the starters, Bistro 88 features several I would recommend. In fact, I look forward to going back to the restaurant and pairing a handful of the appetizers with a wine selection from the notable and relatively inexpensive wine list, and happily calling it dinner. The restaurant's remarkable Jalapeño-Carrot Soup ($1.95 cup; $3.95 bowl) juxtaposes, in a single bite, the fire of the pepper, the sweetness of the carrot, and a super-smooth creaminess that I discovered comes from coconut cream as opposed to a standard dairy cream, which means the dish is not just a taste triumph, but a great offering for vegans. The Smoked Salmon Cheese Wontons ($4.75) are for those who embrace the pleasures of cheese. Crisp on the outside, creamy and hot on the inside, they also possess the heavy mouth feel of smoke. The smoked salmon in the wontons is pronounced in its woodsy flavor, an assertiveness that is balanced by the dense, warm, velvety-ness of the cheese. An order of Steamed Sake Clams ($9.95) also earns approval. In it, a deep bowl comes brimming with clams kissed by a buttery ginger sauce that is worth sopping up at the end. My order of clams came steamed to perfection; far from rubbery or elastic, they were pulled from their shells with only the slightest resistance. They were best, in my opinion, when paired with a slice of well-buttered bread.

Again, only one of my choices in the appetizer department failed to live up to its expectations. The Steamed Mussels ($7.95) were beautiful to look at, but the huge New Zealand green-lipped mollusks somehow failed to meld with their sauce, a tomato basil black bean combination that sounded really delicious. As with the quail, there wasn't anything really bad about the dish, but the flavors just didn't come together as expected, and the mussels felt a wee bit overcooked and tight in the mouth.

As I've said, despite my mild disappointments, Bistro 88 has been added to my list of Austin favorites. Partners Jeff Liu, Raymond Hsu, James Hwang, and Liu's amiable wife, Vivian, have created a menu that departs from the Austin norm, going beyond the Pacific Rim fusion thing by blending those tastes with more classic Continental-type fare. Although I've not yet sampled it, their menu does have a strong meat presence, with Peppercorn Steak ($15.95), Shiitake Mushroom Chicken ($12.95), Tea Smoked Duck ($16.95), Pork Chops ($17.95), and Rack of Lamb ($19.95), all of these offered at dinner, and many of them at lunch. In keeping with their dedication to providing Austin diners with fresh, quality Euro-Asian fare, the partners chose the restaurant's name: "Bistro" in a nod to its Western component, and "88" to its Eastern inspiration. As I learned upon asking about the restaurant's mysterious name, the number 8 is a lucky number for the Chinese. The folks at Bistro 88 have taken the number and doubled it -- they know from running Chinese restaurants in San Antonio that the restaurant business is a volatile one. But if I had to place my bets on Bistro 88, based on my experiences there, luck seems to be on their side.