From Freedom Fries to Fess Parker 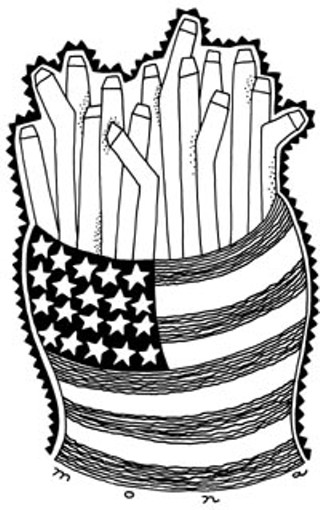 I've just returned from a place where french fries have little to do with "freedom." Comfortably installed at a Parisian sidewalk cafe for lunch recently, freedom came into play only in my decision to devour the salty fried potato batons that curved around my plate as opposed to leaving them there because they were ... um, French.

Two months ago, at the outset of the war, my friend Jean-Luc Salles visited me in Santa Fe, my new home. On his 12-hour journey westward, the well-loved Austin chef and culinary instructor told me he had learned on National Public Radio that the most American of hamburger accompaniments -- the french fry -- was now politically incorrect. The congressional cafeteria, Salles reported, had renamed its french fries "Freedom Fries" in protest of France's opposition to the United States' military action in Iraq. (Of course, removing "French" fries from the menu altogether would be impossible, we laughed.) But reincarnating the humble fried potato stick as a symbol of freedom ... now, there was a way to feel good about feeding that all-American cholesterol-and-fat habit!

While we sipped our French Bordeaux, Salles and my husband, Cedric, accurately predicted over my vehement protests that it would only be a matter of time before the rest of the nation caught on to freedom fries. Never mind that the French themselves consider fries a Belgian specialty; patriotic Americans -- inhabitants of the world's great democracy -- would not tolerate the very "Frenchness" of fried potatoes. Our Gallic allies had, after all, exercised their democratic right to dissent. We'd show them. No more French toast! No more French vanilla yogurt! Goodbye, baked Brie. So long, Grey Poupon (which I'll get to later). "That's absurd," I laughed incredulously. But Salles was right.

The war in Iraq might be over, but eating remains a geopolitical statement. Growing up in the 1970s, there was a popular saying splashed on schoolroom banners. "You are what you eat," the banners boldly proclaimed. While the maxim's authors were no doubt hoping to promote the ingestion of healthful food, the saying takes on new meaning today. What you eat, or more accurately how you refer to those things you put in your mouth, is of political significance. Your food defines you. Freedom fries or french fries?

Returning from France, I turned on my computer to discover an America Online poll asking "Are you boycotting French food in light of the fact that the Bush administration feels France had its head in the sand about the war?" A surprising 57% of respondents at the time of my reading claimed "Yes! No wine. No cheese. Freedom fries all the way!" A USA Today/CNN/Gallup survey released online on May 1 found that nearly one in five Americans who say they regularly buy French products have stopped. So, what are these folks eating? Marmite sandwiches? Hungarian goulash? Ethiopian duro wat? Somehow I doubt it.

Freedom fries, as I see them, are more about semantics than national interest. "We're sending a message to our troops," insisted Rep. Bob Ney, R-Ohio, the man behind the congressional cafeteria's renaming of all foods "French." What message? That while they are fighting for their lives in a Middle Eastern desert, we supportive Americans back home are busy conscientiously objecting to (and thus renaming) their favorite foods? If the name shift from french to freedom fries was intended to damage the French national psyche, it might be useful to remember that in France, diners call their fries "frites."

Besides, as Eric Schlosser, author of Fast Food Nation, points out, the majority of the french fries we consume in the U.S. are made right here in the USA by the J.R. Simplot and Lamb Weston companies. Others are produced by Ore-Ida, which many consumers might be surprised to learn is Canadian. Calling our french fries "freedom fries" then, really hits the French where it hurts, doesn't it?

Language has always played a leading role in defining culinary trends. Menu consultants and chefs count on it. They make a living out of renaming (and of course tweaking) classic recipes time and again. Take the Napoleon, for example. Once exclusively a sweet, layered dessert pastry, today's Napoleon is quite simply a food "stack." Chefs and food writers might know that the original Napoleon involved layers of pastry, custard, and cream, but diners have come to enjoy Napoleons of polenta and pesto, fish and vegetables, fruits and pastry with cream. Who knows? One day soon the "Powell" might replace the Napoleon entirely, the stack's original namesake being a famous French general and all.

This is where Brie and Grey Poupon mustard come in. We live in a global economy, and food is not excluded from it. How many of those patriots who have opted to "boycott" French food products know where their food comes from? I wonder if they've ever consumed "French" foods in the first place? In their effort to make France feel the effects of their ire, they eat freedom fries and abstain from Brie, a cheese that just might be made in California or even Texas. They buy French's (oops!) yellow mustard and shun Grey Poupon. They ditch Evian in favor of Great American-brand bottled water. And for their good intentions, the French are rewarded -- Great American is a French-owned brand -- and the businesses of their countrymen suffer. Grey Poupon is a Kraft Foods North America brand. (The mustard brand also happens to be owned by parent company Altria, better known under its previous incarnation, Philip Morris, the tobacco giant. But then that's opening an entirely different can of worms.)

My thoughts on this war of words? If you want to support our troops, send them fan mail or care packages and dine on french fries guilt free. Take a lesson from history. During World War II, American GIs fought for "Mom, country, and 'good old American apple pie.'" Turns out apple pie was first served in England, or maybe even in France, where it is fondly referred to as tarte aux pommes. 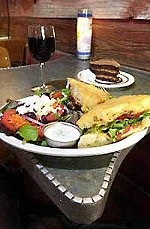