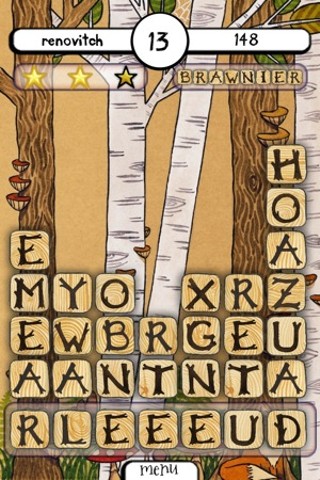 Released just last week by local independent studio Minicore, Tumblewords mixes the strategies of Boggle and Scrabble to create a different take on mobile word games. But is it enough to get noticed on the overcrowded App Store?

You've already got Words With Friends, and if you're a real vocabophile you might have Letterpress and SpellTower, too. The last two are variations on the Boggle template of tracing a path of neighboring letters to form a word, and offer different paces and two-player options. Tumblewords is similar, giving spellers a tempered pace and combining it with a well-designed two-player mode through Game Center.

The game looks simple enough at first with the ability to trace a pattern in the letter tiles in an attempt to spell the longest word with the least popular letters (I'm looking at you, "Q"). Used letters disappear, another line of letters are added, and the tiles are slightly shuffled before the next turn. A line of tiles at the bottom of the screen can be swapped with letters on the board to help you make more impressive words. Higher scoring words fill your "star meter" faster allowing access to one-time helpful options like flipping two tiles, swapping a tile out for another letter, or, for the truly desperate, shuffling the board in the hopes of better letter arrangement. Continue until your turns are used up, and repeat in the hopes of a higher score. At first the swapping options will seem overwhelming, but once you realize the usefulness of the tiles that sit Scrabble-like at the bottom of your screen waiting to help, you're on your way to the leaderboards.

The two-player version is slick and integrated well with Game Center so you can casually play a word and wait for the tell-tale bloop of your mobile device to alert you that the opponent just threw down another lexicographic gauntlet. I often found myself wishing for the ability to send a message with my turn if for nothing else then to congratulate my opponent on decimating me with "sasquatches" (true story).

Tumblewords comes with five themes from KC Green, Liza Ferneyhough, and an upcoming art pack from Chris Onstad of Achewood (!). All are cute and/or cool without being intrusive to the gameplay.

Getting a hang of the game and building strategies is a delightful trek, but when you start to master the tools a few stumbling blocks are discovered. I found myself running out of tiles with no way of adding more. I only had the option of swapping or flipping which didn't help when I only had one line of letters to use. In that case the game becomes much like Scrabble, using the helper letters at the bottom to spell a word, completely ignoring the tiles on the board unless they conveniently spell something. The addition of a speed-run mode would have also been nice since, like Scrabble, the game can languish in an endless "I know there's a better word to be made" mental cycle.

All in all Tumblewords is a welcome addition to the "What word can I spell with an 'X' and a 'J'" genre with enough original ideas and polish to make it stand out from the crush of word games available to mobile players.

Tumblewords is 99 cents on the App Store.