They Are Going to Eat You! 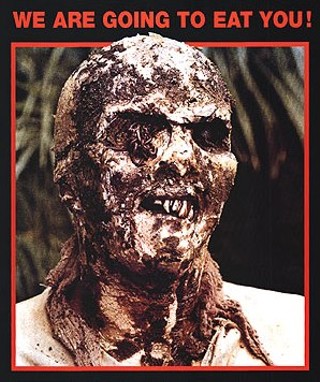 Is it just us, or was 2010 a wild, wild year, cinematically speaking? Did your head explode, entirely without prompting from David Cronenberg, too? It's ricocheting. Seems to us that usually, by day 300 or so, we critics can already discern whether or not it's been an annum horribilis or an annum mirabilus. Nuh-uh. Not this year.

Call it weird, call it irresponsible, call it a cab already, but requisite in pace never sounded so apropos. In a year crammed to the brainpan with multi-platformed revenants and flesh-eaters (metaphorical or otherwise), the chewiest zombie flick of the year, and the millennium thus far, turned out to be The Walking Dead, which gnawed its way in via basic bloody cable of all things.

Meanwhile, George A. Romero, the godfather of socially-semi-conscious ghouls, aimed for the head and blew his own foot off with the atypically inanimate Survival of the Dead. You know things are in a state of slippage when a remake of one of Romero's old anxiety attackers (The Crazies) is just flat-out more gut-munching fun than the new Romero horrorshow. Don't even get me started on Jonah Hex.

Not that the past year was a bad one, for film, really. It was just...exceptionally out-there. Seriously, just pondering the varied and conflicting metaphysical strata of The Dude, as he appeared in Crazy Heart, Tron: Legacy (two roles!), and True Grit is enough to mess with anyone's head. Talk about hard to kill. (Not that we'd ever want to.)

We started last January on a surreal note -- Michael Cera's pre-Scott Pilgrim gambit for non-Ceraian relevance, Youth in Revolt, and the terrifically wiggy, locally-lensed documentary Zombie Girl -- and rapidly bypassed any semblance of whatever passes for normal these days, onscreen and off. And that included J-Lo's career. (Is it normal? Discuss.)

Some things stay the same, though, mordantly so. The lustrous Anne Francis (Forbidden Planet) passed away the other day. Among many irreplaceable others, we also lost editor-provacateur Sally Menke (QT's longtime chopper), Leslie Nielsen (Forbidden Planet prior to Airplane! etc), and Dennis Hopper, and Dino De Laurentiis. Do yourself a favor and go rent Blue Velvet in honor of those last two, and then ponder the sublime nature of a universe that brought them together.

Speaking of chaos, art in general (but film, specifically) is currently imitating life imitating the interior chaos of a collapsing white dwarf star. From Freakonomics to Jane Austin, everyone and everything was savaged by mash-up walkers this year. It was a triple-aught shell of a year, panic-fired into the great, shambling unknown that is the box office (or home theater), the moviegoing public (or I Luv Vulcan/NetFlix devotees), and filmmaking (on HD) itself. We had no idea what to expect from our favorite art form-cum-mediastream last January, which is pretty much how we feel this January.

All things considered -- including but not limited to Alamo Drafthouse Films' angry and outrageous debut distribution deal, Four Lions, Johnny To's unhinged Vengeance, and Gaspar Noe's dreamy/doomy Enter the Void -- it's been a vicious, beautiful, and altogether unique year in the dark, at the movies.

Pandemonium: bring it on. We're all about that sort of thing. (But please, Mr. Romero, have a little heart.)