This Is Not an Advertisement for Frankly Organic Vodka

We don’t want to confuse you, no matter how much you might’ve had

Frankly Organic Vodka? It’s a Texas product, halleujah! Because not everything about this state is worthy of scorn, right? 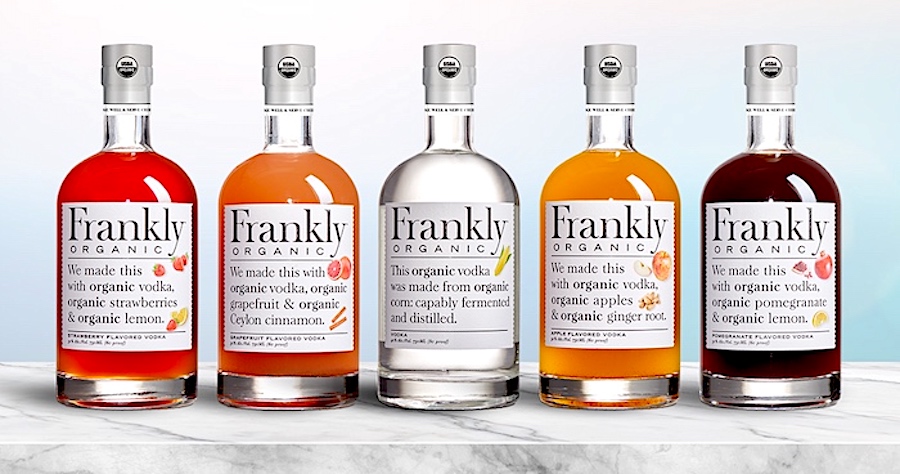 Frankly, my dears, they do give a dram.

More specifically, it’s an Austin product, this vodka, and one I’d been seeing well-advertised in these very pages. “Hmmm,” I wondered, noting the superb graphic design adorning the bottles, raising an interested eyebrow at the “organic” designation and the array of available flavors, “hmmmm, I wonder what these local spirits actually taste like?”

But whereas all manner of other local and national and even global houses of distillery (hello, Diageo!) have sent me samples of their elevated hooch on the regular (because food lieutenant, see), I’d yet to receive even a note of inquiry from these Frankly folks. Not even a “Oh HAI, we exist and we’re local! We are a new adult beverage thing!” did I receive from these attractive upstarts.

Until I did. And along with the greeting came a sampler – a handsome boxed set – of those Frankly Organic vodkas. Well, thank you.

Now, we’re adherents of that classic editorial/advertising divide here at the Chronicle – a practice that seems almost quaint (yet noble) in these more spenderfluid times, you know? – so we’re not going to be shouting out a delighted huzzah to anything just because its parent company has paid for commercial space in our pages. That’s what Sponsored Posts are for, and this ain’t one of them.

But, OTOH, neither are we going to not report on something that’s good just because it advertises with us now & again. Get it?

Further, for this food journo in particular, I don’t feature anything that, as they say, sucks. Right? If something’s not at least decent enough for me to enjoy, I won’t be passing along the word to our readers. Let the inferior stuff, whatever it may be, wither to oblivion in the backwaters of the marketplace. I’m not a critic, per se, I’m a reporter; and I’ve got more important (ie., good) things to spend my writing time on.

So you can see where we’re going with this post, yes? If I’m actually mentioning these Frankly vodkas … they must be, ah, what was the phrase? “At least decent enough,” was it?

Drinker, please. These vodkas may be the best things out of Texas, vodkawise, since Tito Beveridge first disrupted the entire industry with his handmade spirits back in 1997. And that’s mostly because of the variety of Frankly’s flavors, yes, and partly because we prefer providing organic comestibles to our intestinal microbiome, but also just because it’s vodka well done.

1. We can tell Frankly Organic Vodka is well done beyond the flavors, because the sampler pack comes with a straight-up corn-based vodka, too. And it tastes like vodka’s supposed to taste and it’s, like, smooooooooth – but (as with Still Austin’s own marvelous whiskey, for instance) it’s accompanied by a natural aroma of the fresh corn from which it was made. Some vodkas, no matter how good, there’s sometimes a little whiff of the laboratory about them, you know? But this Frankly vodka? Of course it’s all distilled in pots and pipes, with the heating and the steaming and the filtering and so on, pretty much like everybody else’s vodka – there’s no innovative, paradigm-shifting process designed by Elon Musk on an ergot bender or whatever – but this Frankly stuff seems, in the drinking of it, like it just bubbled up from some miraculous vodka stream in the middle of a cornfield in Valhalla.

Yeah, and that’s just the basic hooch. And then –

2. Those flavors. Ooooh, those flavors. Because the Frankly honchos aren’t like, okay, we’ve got this great vodka and now we’re gonna dumb it down for the lowest common denominator by throwing some cheap sugar-and-fruit shit into the mix. No, with Frankly, the finer ingredients make it more like the difference between your kiddie soda pops and those excellent adult-targeted alcohol-free beverages we noted in this recent round-up. With Frankly, it’s like a less intense version of the alcoholic bitters that inform many a complex cocktail. And of course championing one flavor over another is a fool’s game – chacun à son goût, n’est-ce pas? – but if you’re heeding these words at all, friend, tell you what: You especially don’t want to miss their vodka that’s enhanced with apples and ginger root. All organic, naturally. And Frankly.