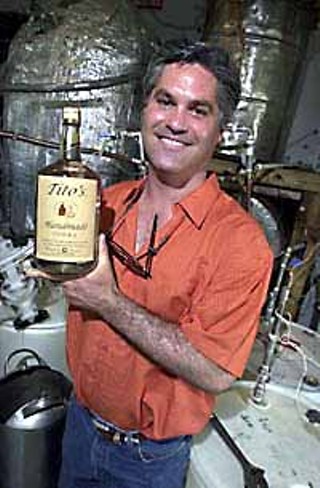 Everyone said it couldn't be done. Imagine the suits at Smirnoff or Absolut or Stoli sitting back and laughing over the prospect. 'Texas vodka? Who the hell would buy a vodka from Texas?!' They probably laughed until their faces turned beet-red. Now imagine their chagrin when Tito's Handmade Vodka won the 2001 Double Gold Medal at the San Francisco World Spirit Competition, signifying that all of the judges had picked Tito's as the best. It was unanimous. Tito's beat Smirnoff, Stoli, Ketel One, Skyy, Belvedere, Chopin, and every other vodka entered. Or how the mega-companies suffered when Spirit Journal decided that Tito's was the only vodka in the world that rated four stars. Even better, picture how they felt when the Bureau of Alcohol, Tobacco and Firearms analyzed Tito's vodka and found it to be 'the cleanest and purest spirit ever tested.' The big guns aren't laughing any more. So who is this Tito guy?

Born Burt Butler Beveridge II, in San Antonio, Tito grew up with constant jokes about his last name. 'Hey Tito, go get me a beverage.' 'Hey Tito, what you gonna name your kid? Cold?' The last thing on his young mind was owning a vodka company. After graduating from UT, he went straight into the oil business. He traveled the world working in little out-of-the-way places in Venezuela and Columbia running a dynamite seismic exploration crew. 'We never had enough money to operate on, so I learned how to operate a business on nothing,' he says. That turned out to be good practice for operating a distillery. The other thing that helped was having lots of free time and not much to do with it. He picked wild fruits, fermented them, and made a wine-strength drink out of them.

When he finally repatriated, he worked as an environmental engineer on Superfund projects. 'When my 'green' friends give me trouble about driving a truck, I tell them I did hard time working in landfills and Superfund sights,' he points out. 'But I'm done. If I ever go to a landfill again it'll be in my pickup truck kicking shit out of the back.' After tiring of toxic dumps, he tried his hand as a realtor and selling mortgages. Another talent that would come in handy.

He also started making small batches of habanero-flavored vodka for pals. Everyone loved it and encouraged him to make it commercially. For market research, he went to liquor stores in Austin and asked them whether they'd buy his habanero vodka. No one was interested. Seems other vodka companies already had that market cornered. 'But I kept hearing that a good martini woman's vodka would be a hit.' I ask him to define a woman's vodka. He looks a little sheepish, like he just stepped on a PC land mine. Then he gives the charm grin and goes for the save. 'Basically, girls have better taste and are more particular.'

Armed with his market research, he formed a company named Fifth Generation Inc. that first released its vodka in 1997. 'I always introduce myself as a fifth-generation Texan. So a friend told me to call it Fifth Generation, because I'm fifth generation and I generate fifths.' Then he went looking for investors. Everyone he talked to said there was no way they would ever get a distillery permit; there's never been a legal distillery in Texas. 'Come back when you get a permit,' was the stuck-record message. So he spent his own money and got a permit. He went back to the investors. 'You'll never get distribution. Come back when you find a distributor,' they said.

Tito started applying for every credit card he could get, churning the due dates and taking advantage of rollover deals. His 18 credit cards were whipped with a debt load that was running about $70,000. But he finally found a small distributor in Houston that was licensed, but handled no spirits. They cut a deal. Then he had to provide product. So he bought every vodka available. Poured them all into numbered mason jars, mixed them up so he wouldn't know which was which and started tasting to see which ones appealed to him. When he figured out what he liked, he asked his friends to take his test. Then he threw his own brew into the contest. If anyone picked a competitor over his, he made a subtle formula change and came back. Once he and all his friends picked Tito's vodka in blind tastings, he knew he had the product he wanted.

Next, he had to put together a distillery. Remember his real estate background? 'I bought this land in February of 1995,' he recalled. 'I was the realtor on the transaction. This property is 13 acres, and it was the cheapest dirt in Travis County. And it was owner-financed. That's why I bought it. Closing costs and everything were $3,000 and now I pay $409 a month.' I'll attest to the cheapness. Tito's property is south of the new airport, past an abandoned racetrack, down a torn-up road and across from a Charro stadium. If you've ever been to a fancy distillery, Tito's might be something of a shock. His office looks like a teenager's bedroom: stuff piled everywhere, a couple of guitars in the corner. A pull-up bar lodged in the doorway with a leather jump rope hanging over it. But appearances can be deceiving; a lot of hard work goes on at Tito's.

The first thing you notice when you enter the distillery is the overwhelming fragrance, like fresh bread and alcohol. For a company that makes 'the cleanest and purest spirit ever tested,' the place looks like it was cobbled together by hand with spare parts. Pot stills feed plastic barrels, almost like a high-end bootlegger operation. In the beginning, he did everything made the vodka, filled the bottles, and put on the label and caps. 'I kept getting carpal tunnel from screwing so many caps on. Then I found a chuck that would fit a drill so I could screw on the caps with the drill. Wow!' He gives a thumbs-up sign. 'Real uptown.' Now he has some help. His two assistants, Chris and Casey, bottle the vodka. They've only worked there a short time. Tito used to pick up workers downtown to help him bottle, but they were drinking the stuff every time he turned his back. Chris and Casey look sober.

Since not many folks travel to his distillery, Tito has to rely on hearing from his customers when he's out and about. 'I got into the vodka business thinking I would be meeting lots of interesting new people. Instead I'm off in a shack across from a Charro Rodeo. So when I meet someone in the public that likes my stuff, it really charges me.' Luckily, he hears a lot of compliments. Not only that, but folks tell their friends about Tito's Handmade Vodka, which helps, since he can't afford much advertising. Even without ads, he's gotten calls from as far away as Russia and Sri Lanka. They ask him if he knows how they can get his vodka. He tells them that he's still trying to figure out how to get distribution in Oklahoma. Even now, Tito finances the company by churning credit cards. But at least he's made it without investors. Whatever's left at the end of the month is his. If he doesn't have to put it back into the product, he likes to enjoy the finer things in life. Like groceries. But don't get the idea that Tito is suffering.

During our time together, I keep getting the feeling that he is absolutely, head-over-heels in love with what he's doing. He may not be wealthy (yet). But he's his own boss. He does his thing just the way he thinks is right. 'I'd like to be fiscally independent and self-actualizing, but I kinda just like coming out here to Charro Ranch-land and trying to make the best vodka in the world.' And that's no idle boast. Don't just take the word of all the organizations that awarded his vodka; take mine. Sitting in his office with no AC, I tasted the vodka at room temperature, about 80-85 degrees. That should be the worst possible way to drink vodka. Every impurity and bad flavor comes out at a warm temperature. That's why vodka is served cold, if not frozen. The chill hides the problems. Tito's just tasted smooth, rich, and luscious. His description: 'It's just real good vodka.'

I'm tempted to describe Tito as a singular eccentric oddball in the great tradition of Texas iconoclasts and mavericks. But he's really much more complicated. He's also a tight fiscal manager who can quote sales statistics both for his brand and for his competitors. He's a man who can't be bothered to clean up his office, but makes 'the cleanest and purest spirit ever tested.' He has his self-designed labels made at the state MHMR school. He says that's because it's cheap, but you get the feeling the motivation might be more altruistic. By the end of our time together, he reminds me of Kris Kristofferson's line about 'a walking contradiction, partly truth and partly fiction.' One thing I do know Tito Beveridge is a man who makes 'real good vodka.'