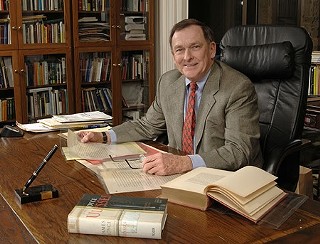 Big news from the Harry Ransom Center: Long-time director and major player in the archive scene Thomas Staley plans to step down in August of 2011.

A 22-year vet of the HRC, Staley has amassed one of the finest collections in the world, raising more $100 million in donations and collection materials – but not without some controversy. (See a 2007 New Yorker profile, which in part detailed the international community's frustration with Staley's many dazzling acquisitions, here.)

According to the press release put out today by the University of Texas at Austin Office of Public Affairs:

"Under the leadership of Tom Staley, the Ransom Center has become an American pantheon of literary and artistic luminaries," said William Powers Jr., president of The University of Texas at Austin. "The Center's collections, which have grown tremendously during his tenure, are the crown jewels of our university. They enrich the cultural experience and illuminate the literary record for students and professors, for visiting researchers, and for the people of Texas and the world at large. We owe a great debt of gratitude and deepest appreciation to Tom Staley."

"Throughout my years at the Ransom Center, I have been told again and again by colleagues and friends that the directorship of this wonderful place is one of the best academic jobs there is," said Staley. "As the years have gone by I've come to believe it myself. It has been 22 years of great pleasure, and I think that's enough for one person. It is time for me to go back to writing and spending more time in productive idleness, offering someone else the opportunities that I have had at the Ransom Center. But I must note that there will be no diminution of my energy and commitment in the next 16 months that I remain the Center's director."

No word yet on if the candidate search for a new director is already under way.