More than a half-century after the first boxes containing papers by Arthur Miller arrived in Austin, the last boxes of the Pulitzer Prize-winning playwright's papers will join them, and the full archive of this "profoundly American writer," as Tony Kushner called him, will reside at the University of Texas' Harry Ransom Center. 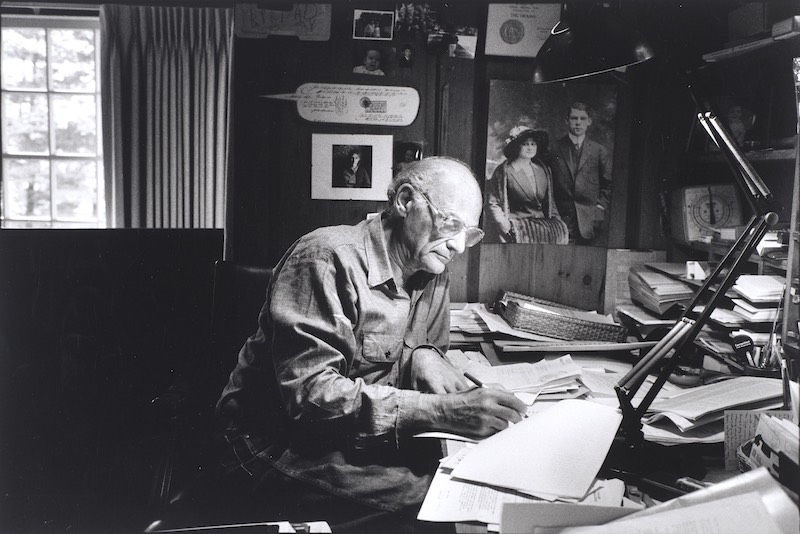 The HRC reportedly paid $2.7 million for some 230 boxes of materials – manuscripts, journals, drafts of essays and speeches, contracts, professional correspondence, family letters, and photographs – even though dozens of the boxes had been stored at the center since the early Eighties. But those boxes and the 89 that Miller shipped to Austin just prior to his passing in 2005 were only on deposit – a nebulous status that kept the center from being able to catalog the materials or make them available to scholars. The only materials that fully belonged to the Ransom Center were the 13 boxes donated outright by Miller in 1961, when he dealt with "the Great Acquisitor" himself, Harry Huntt Ransom. (According to an article in The New York Times this week, Miller made the gift to take advantage of a huge tax deduction.) What he gave up to Texas were materials related to the plays that catapulted him to fame: All My Sons, Death of a Salesman, and The Crucible.

But the playwright must have been pleased with the way his materials were treated here, since he sent another 73 boxes following a fire at his home in Connecticut in 1983 and stated in a letter at the time that the Ransom Center should have right of first refusal whenever he decided to dispose of the archive. The Times story states that current HRC Director Stephen Enniss sought to purchase the complete archive a few years ago, but negotiations with the estate went nowhere and Yale University entered the picture as a potential buyer, looking to add Miller's archive to its Beinecke Rare Book and Manuscript Library. The Ransom Center offered to match Yale's bid, and ultimately it was accepted. (The funds came from the university and private gifts.) The fact that those 13 boxes originally donated by Miller were here may have tipped the scale in the HRC's favor. It was more important to keep all the materials in one place than have them split between institutions. In a release from the Ransom Center, the playwright's son, Robert A. Miller, calls the HRC "a fitting home for Dad’s voluminous notes and papers." That rings true, given the center's substantial holdings of Miller's peers and colleagues – Tennessee Williams, Lillian Hellman, Adrienne Kennedy, Stella Adler, Boris Aronson, and Eli Wallach and Anne Jackson – as well as a host of prominent 20th-century dramatists, including George Bernard Shaw, Samuel Beckett, David Mamet, Sam Shepard, Tom Stoppard, John Osborne, David Hare, Terrence McNally, and Elmer Rice. And through the Magnum Photos archive, there are numerous works by Miller's third wife, Inge Morath. The center also celebrated Miller's legacy in a major way with its 2007 exhibition "Arthur Miller: Rehearsing the American Dream," which included thoughts on Miller by one of his most distinguished playwriting descendants, Angels in America author Tony Kushner.

At a memorial service for Miller in 2005, Kushner noted that "Arthur Miller's was a great voice, one of the principal voices, raised in opposition, calling for resistance, offering critical scrutiny and lamentation – in other words, he was politically progressive, as politically progressive is best defined in these dark times." Austin is fortunate to have so many of his words and the spirit that fueled them with us in perpetuity.

The HRC promises that the archive will be cataloged within two years and then made available to researchers, students, and the public. For more information, visit the Ransom Center website.