"The fastest way to destroy a democracy is to poison the information," Scott Pelley said at the Texas Book Festival on Sunday. "When others call journalists enemies of the American people, we need to push back and educate." 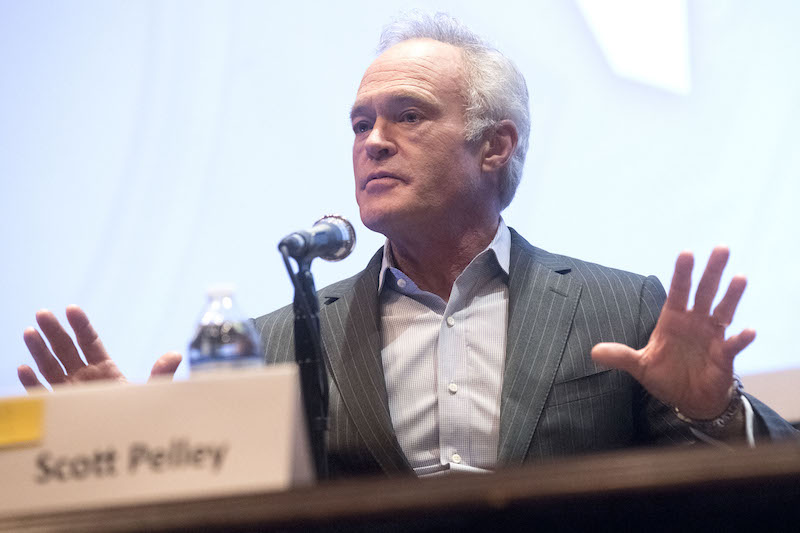 The 60 Minutes correspondent and former CBS Evening News anchor adds author to his résumé with Truth Worth Telling, a memoir that he called a book of "short stories" about the major events and people he has covered in his long career. (Pelley got his start in journalism at age 15, working as a copyboy for the Lubbock Avalanche-Journal. He later majored in journalism at Texas Tech and started his television news career at a Lubbock station.)

The lurking topic in Sunday's session, though, was the media itself, in an era of change/rebirth. Pelley cited James Madison's belief that the news media is "essential to government, but must be completely independent of the government."

With Kathleen McElroy, director of the University of Texas School of Journalism at his side, Pelley quoted Madison: "He said the freedom of the press is the right that created all the other rights." Journalism in the United States is "far from perfect, but it's the best in the world, and I believe it's part of what makes this the best nation in the world."

Pelley said that current challenges should be taken seriously and recalled the 1798 Sedition Act which made “false, scandalous, or malicious writing” punishable by prison time. The act remained in force for three years.

His advice to fellow journalists? "Do your job. Do it really well. It's an opportunity to show how what we do is part of the great American experiment. Journalism has nothing do with being popular. Are you in this for credibility or for celebrity? If you're in it for celebrity, you're in the wrong business."

For readers, he advised them to be discerning with the information they receive by considering the source. "There's never been more information available, but never before so much bad information," Pelley says Furthermore, he counseled attendees to do their research and look for the credible news sources that incur "institutional risk" when they get the facts wrong.