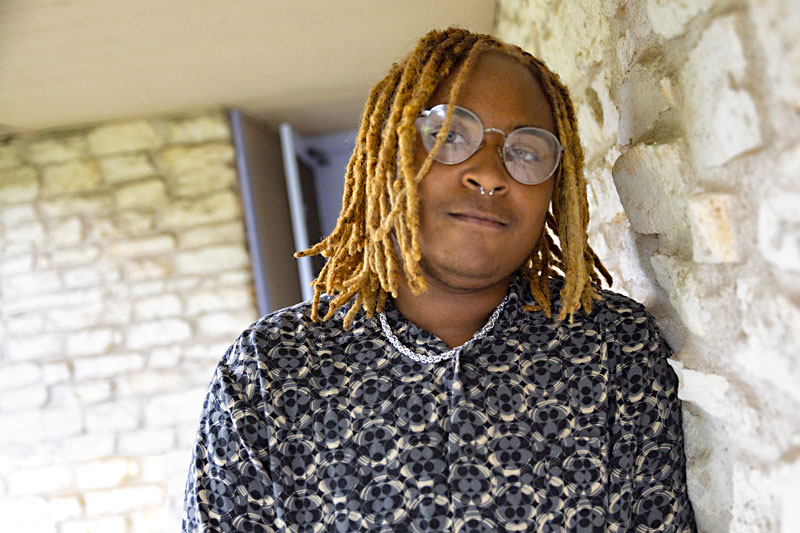 ATX Interfaces has carved out a unique space in arts programming – one unbound by medium and steeped in a deep commitment to inclusion, diversity, equity, and accessibility. Melding poetry, music, and social justice, Interfaces curates free community-focused art events, including artist showcases, open mics, and educational speaker series, with transparency.

"Someone told me the definition of 'interfaces' is ... a space where two systems, subjects, organizations meet and interact," Interfaces' founding Executive Director KB says. "That's literally what I want to happen: different people interacting with each other and different disciplines, or disciplines that seem different, to also interact with each other."

When KB moved to Austin in 2018, they noticed a lack of free open mics, finding only those with intent to make space for either people of color or LGBTQIA folks. Truly intersectional environments were few and far between. KB soon began hosting an open mic at BookWoman, where they worked at the time. Here, Interfaces took shape with the intention of creating space for everyone by championing IDEA-conscious programming (IDEA standing for inclusion, diversity, equity, and access). "Going into Interfaces, I just wanted the space to be different in the system," the organizer says. "Like, we're not mystifying."

This new approach proved to be a big draw, with so many attendees that the open mics had to move to North Loop's MonkeyWrench Books to accommodate the larger audience. "It was the most people of color I'd ever seen in MonkeyWrench," rapper Noa Seina Sleeper says of the first Interfaces open mic they attended. "That was awesome. It was packed."

Sleeper organizes a similar open mic event, Word Exchange, but they say Interfaces crafts a unique atmosphere: "I think Interfaces is the only space that I've found that has felt both very queer and very hip-hop. That's been something that, as a trans person and a rapper, I've been needing in the city."

Another musician, Tåsi (Marlon Hedrick), praises the organization's ability to mesh together multiple mediums of art in one event. "I just love that," he says. "I think it's such a cool way of getting audiences who are more into one or the other to commingle."

"Coming up to the mic with some fire," as Sleeper describes, is welcomed – Interfaces proclaims itself a "brave space," not a "safe space." After hearing others voice harmful things without accountability at other open mics, KB wanted to find a balance between the heavy topics discussed and the potential danger they pose to the audience. While KB encourages content warnings, they don't intend to coddle the community: "I think, internally and externally, Interfaces prides itself on having tough conversations, and also, when harm is happening, disrupting it and transforming it."

Interfaces' growth wasn't hindered by the pandemic, simply adjusted. KB took on a team of volunteers in early 2020, which helped make the required shift to virtual programming, and its Artists Showcase + Open Mic series continued through Zoom. In addition, Interfaces published a zine on prison and police abolition, do you want a revolution? ATX Artists On the Carceral State, with 75% of the proceeds going to 400+1, Austin Black Pride, and Black Trans Leadership of Austin. "Even with us being small, we're mighty," KB says. "Investing in marginalized artists is better for arts in Austin, period."

"The more spaces that we can have where we can go from individual voices to a chorus of voices is something that's always going to be invaluable," says writer, activist, and zine contributor Murphy Anne Carter. Her experience teaching creative writing and poetry at the Travis County Correctional Complex inspired her prose in the project, as she highlights the dissonance between the expectation and reality of creativity in carceral spaces. "So much fucking laughter / No one talks about how real the jokes are / in jail because there, you swallow / tragedy with every inhale," Carter writes. "A general openness" is what drew her to Interfaces, a candid place for explorations of equity. "I think the real power, in my mind, behind all these ideas, whether it be abolition or transformative justice, is community."

Now, serving the community means Interfaces taking a hiatus, an action intended to ease the adjustment to its new nonprofit status. The organization incorporated in March, much to KB's reluctance, due to complications with funding and taxes. "That decision comes from us trying, and me wanting us, to internally reflect what we want to see externally," KB says. "I always want to make sure that our expansion is in alignment with our mission and vision." The director ensures in a blog post that they'll continue "breakdancing within the state's constraints" as they recalibrate in the months ahead.

KB stresses the importance of maintaining malleability to adapt to community needs. Even in discussing the organization's future, they center the lives of artists, rather than the group itself. "I see us contributing to a world where artists value difference and accountability and their own growth and evolution that surpasses capitalistic standards of worth and contributes positively to communities. I just said our mission statement, verbatim," KB laughs. "I want Interfaces to be a part of it, and if we are not a part of it, I want us to be giving the tools to someone else so they can create it."

This frankness is the common allure of Interfaces. "They've experienced the bullshit, for lack of a better word," Hedrick says. "So I feel like, when they put together their mission statement and how they run their events, it comes off very organically." Born from KB's naturally confessional nature and their own experiences with organizations boasting transparency without keeping their promises, the community collective builds something genuine – bullshit-free.