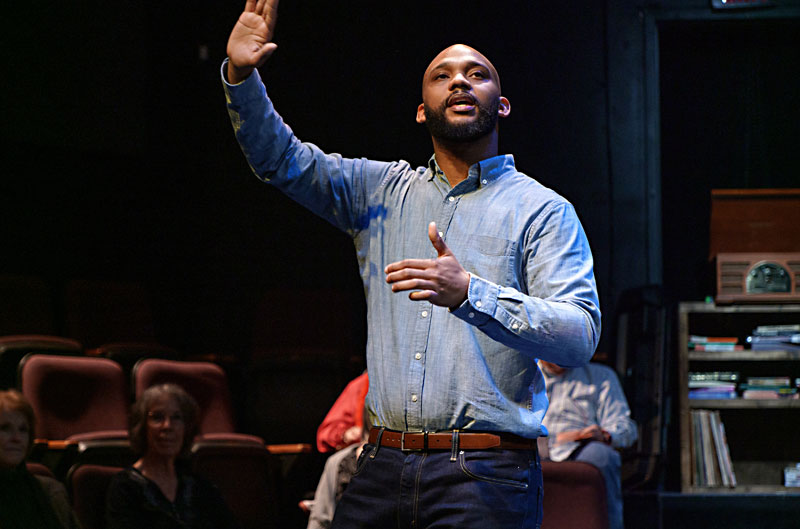 Kriston Woodreaux in Every Brilliant Thing (Photo by Kirk Tuck)

Do laundry. Wash the car. Pick up some beer.

No doubt these items or some like them have been on a list you've made of tasks that need attending to. Who hasn't made a to-do list?

But have you ever made a to-live list? That would be an inventory of those things – objects, observations, experiences – that are so pleasurable, so satisfying, so sweet, they make life worth living, make a body want to live.

At the heart of this solo show by Duncan Macmillan (with Jonny Donahoe) is someone who made such a list. And he had good cause: to give his mother reasons not to end her life. After she'd made her first attempt at suicide, he thought that if he could give her a list of all that was wonderful in the world – "every brilliant thing," as he puts it – she'd never be tempted to try again. Of course, he was all of 7 at the time and had no grasp of depression or other pressures that might lead a person down that dark path. All he knew was it made sense to him, so he threw himself into the project, full of hope. The initial list reflected his age – "1) Ice cream, 2) Water fights, 3) Staying up past your bedtime and being able to watch TV" – but as later experiences in life led him to keep expanding the list, items such as "laughing so hard you shoot milk out of your nose" and "kind old people who aren't weird and don't smell" gave way to "knowing someone well enough to have them check your teeth for broccoli" and "making up after an argument." The show is his account of how the list grew, and why and what was in it.

Only our narrator doesn't just want to tell us his story: He wants to involve us in it. Before the show, he hands out numbered cards to assorted attendees so that later, when he says a number on the list, the person with that numbered card can call out "Bubble Wrap" or whatever the item is. (Mine was "1008) Dancing in private.") He also gently recruits folks to stand in for people in his past: the vet who euthanized his dog, his father, the woman he fell for in college. We're always invited into the story, our participation solicited with the warmth and deference of an old friend asking a favor. At least that's how it feels with Kriston Woodreaux in Zach Theatre's production. The actor is welcoming and cordial, always with a laugh at hand, his pale blue cotton shirt and jeans (supplied by costume designer Christina Montgomery) setting a casual tone. Turning him down would be like refusing to help a pal set up for a party.

And in some ways this production feels like a party, since so many audience members join in. Even as the story turns dark through a marital split and questions of mental health, we stay with Woodreaux's unnamed narrator, still contributing to the list, still stepping in to be the people meaningful in his life. His journey remains something we share in – in the communal way that guests do. That is in part owing to the, pardon the term, brilliant way Macmillan's script is built, but it's also the sensitivity that Woodreaux and director Nat Miller bring to this production, seeking out ways in it to pull us together and keep us together.

The play discusses the idea that suicide is contagious, that when a person taking their own life is reported or talked about or just made the subject of a book or play or film and it spreads through the public consciousness, a spike in suicides follows. What Every Brilliant Thing does is expose its audience to those aspects of life that fill our existence with pleasure, with joy, with wonder. It sends us from the theatre filled with reasons to live. In doing so, this play may also be creating something contagious: an embrace of life and all that makes it worth living.

A version of this article appeared in print on February 14, 2020 with the headline: Every Brilliant Thing