An Austin-infused Arden is more poetic license than artistic alchemy (l-r) Robert Colley, Peter Young, Patrick Wheeler, Web Jerome, and John Michael Hoke in As You Like It (Photo by Erik Withers)

There is no shortage of theatre traditionalists who think that the works of Shakespeare need protection rather than reinvention, as if their playhouses were museums rather than places to play.

But without a little literary blasphemy that transports an Elizabethan masterwork to a different time and temperament, how can those who don't look like the writer of the canon find a voice in it? And without a little artistic alchemy, how can outmoded themes and antiquated forms of expression be rendered more relevant?

A gender-fluid Romeo and Juliet at the Royal Shakespeare Company, an all-female version of Julius Caesar set in a contemporary women's prison at the Donmar Warehouse, and an actor with thalidomide-induced phocomelia cast to play the "deformed King" in Hull Truck Theatre's Richard III are just a few of the artistically bold choices that have recently taken place in the Bard's own backyard.

And so As You Like It is more than the title of Shakespeare's most popular romantic comedy, currently in production at Austin Shakespeare. It is an open invitation to stage the play as you like it.

The story begins with Duke Senior (Chuck Winkler) being banished from court by his younger brother, Duke Frederick (also Winkler), and seeking sanctuary in the Forest of Arden. Frederick then banishes his niece Rosalind (Emily Christine Smith), who, along with his daughter Celia (Brooke Culbertson) and the fool Touchstone (Patrick David Wheeler), travels to the forest disguised as a boy for safety and then to tease her suitor, Orlando. Orlando (Matthew Graham Wagner) has also fled to the forest after his older brother Oliver (Carl Kraines) threatens his life and withholds his rightful inheritance.

By the end of the play, love and a brief respite in the woods have conquered all. Rosalind marries Orlando, Celia marries Oliver, Duke Frederick invites Duke Senior back to court, and all's well that ends well.

Ann Ciccolella, Austin Shakespeare's artistic director and this production's director, doesn't so much reinvent this play as attempt to revitalize it by transporting Arden to the Hill Country. She infuses this version with snippets of original songs by local songwriters – including Guy Forsythe, Nagavalli, Susan Gibson, Tish Hinojosa, and Walt Wilkins – that are performed by guitar-wielding actors, has costume designer Aaron Kubacak dress her cast in a mélange of Southwestern wear, and, per a press release, encouraged Tara Houston to devise scenic design to reflect Austin's thriving street art movement.

While clever conceptually, not much is actually achieved in practice and very little of Shakespeare's work is particularly informed in the process. Missing is a balls-to-the-wall buy-in of the concept.

While the contemporary tunes are a nice touch, they only serve as isolated, stand-alone moments rather than function as an interwoven part of the play's narrative. As such, they are an interesting but not an integral part of the storytelling.

Also interesting is having characters speak with Texas accents, which nicely offsets all the Shakespeare-speak and accentuates the cadence in the delivery of the comedy and the occasional iambic pentameter. But only Arden's goat and sheep herders (a delightful Helyn Rain Messenger as Phebe, Ethan Santo as Silvius, Web Jerome as Audrey, and Max Green as William) twang, and no effort is made to have the speech patterns of the court characters reflective of the other five flag nations that have claimed sovereignty over Texas.

Doing so would have added something to the effective but largely nondescript portrayals of Smith's Rosalind, Culbertson's Celia, Wagner's Orlando, and Kraines' Oliver. Only Wheeler as Touchstone and Peter Young as Jaques, a hopelessly melancholic lord who accompanies Duke Senior into exile, bring to the stage more than what appears on the page, but their exaggerated work places them in a different play than the rest.

The production also falls short in its ability to generate something magical, mystical, or particularly Austinesque about Arden. The forest is represented by flat terrain, a handful of metal trees cut out from the sheets that are suspended above them, and lighting design by Patrick W. Anthony that illuminates but never enlightens.

While audiences should applaud Austin Shakespeare's creative risk-taking, it is unlikely that they will do the same for its end result.

A version of this article appeared in print on November 29, 2019 with the headline: As Y’all Like It? 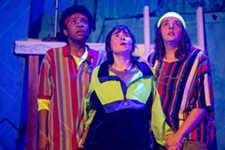 Review: Vortex Repertory Co.’s Ride the Wave
All foam, no fortitude in this surfer dude play