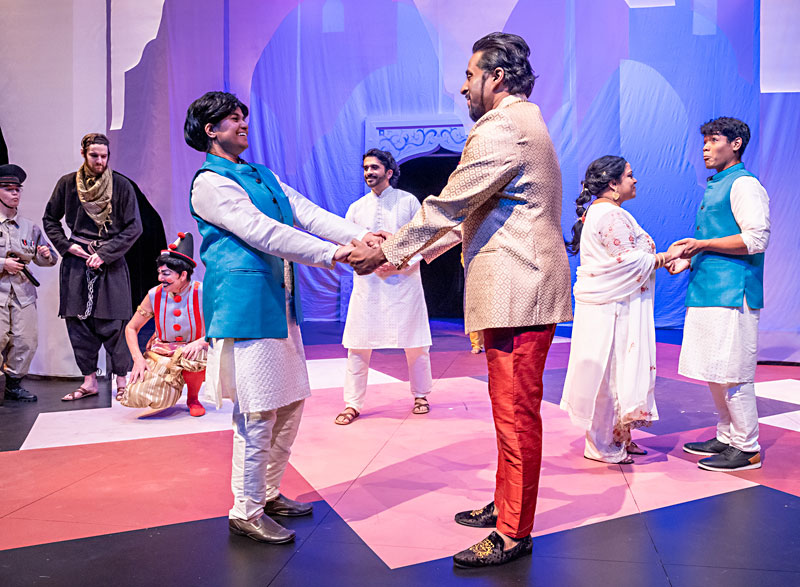 Not long ago, The Onion offered a mock review of a community theatre production of Shakespeare's The Merchant of Venice and director Kevin Hiles' bold choice to set it in 16th century Venice, as intended. Says Hiles, "I know when most people hear The Merchant of Venice, they think 1960s Las Vegas, a high-powered Manhattan stock brokerage, or an 18th century Georgia slave plantation, but I think it's high time to shake things up a bit."

With a tagline that states "The Bard is only the beginning," Austin Shakespeare is no stranger to taking an Elizabethan masterwork and transporting it to a different time, territory, and temperament. The company's pre-pandemic production of As You Like It, for instance, shipped the play's forest in Arden to the Austin Hill Country. And so, it has decided to give its current staging of Shakespeare's romantic comedy, Twelfth Night, or What You Will, a Mumbai makeover. With a subtitle like that, which is the equivalent of the modern-day "whatever," it's surprising that every production of this play isn't engaged in some form of poetic license.

Ann Ciccolella, Austin Shakespeare's artistic director and this production's director, recognized that the script's inclusion of unrequited love, mistaken identity, music, and heightened language are all familiar tropes in the highly stylized Bollywood films that have been an international sensation since the 1970s. The play's driving social distinction between aristocracy and commoners is also a go-to plot point in Indian movies. And, of course, the spirited, playful nature of this play and these films is a perfect fit for Austin Shakespeare's return to live performance after a 20-month hiatus.

Twelfth Night features a pair of fraternal twins – Viola (Manali Sunkara) and Sebastian (Josh Kok) – who are separated by a shipwreck and carry on their lives thinking the other dead. Landing on the coastal city of Illyia, Viola disguises herself as a man for protection, to honor her brother, and because that is what women do in Shakespeare's comedies. She finds employment with Orsino (Tamil Periasamy), the duke of Illyria, with whom she secretly falls in love. The duke is in love with the Countess Olivia (Michelle Jackson) and sends the cross-dressing Viola to woo her on his behalf. The countess, in turn, falls in love with the disguised Viola, but is bedded and wedded by her twin, Sebastian, when he happens into town. Because that is what men do in Shakespeare's comedies.

Under Ciccolella's astute direction, this production tilts heavily toward the play's laughs rather than its ample melancholy by allowing the more comedic players to act broadly, boldly, and in the spirit of one of the jester Feste's best lines, "Foolery, sir, does walk about the orb like the sun; it shines everywhere."

At the core of much of the comedy is the larger-than-life Sir Toby Belch and his bumbling drinking buddy Sir Andrew Aguecheek (Ev Lunning and Max Green, respectively), the plotting Fabian (Srini Raghavan), and Feste (Meredith O'Brien), who are a pleasure to watch. Particularly fun is the brilliant transition of Malvolio (Ben Wolfe) from Olivia's self-important servant to love-struck fool. Required of any professional production of a Shakespeare play is a corps of actors who have so mastered the work's Elizabethan cadence and iambic meter that it is delivered as if their native tongue. Perisamy, Wolf, Jackson and Sunkara are particularly adept and engaging, although for most others it is still a work in progress.

In short, this is a delightful, attendance-worthy production of Twelfth Night. Or, what you will.