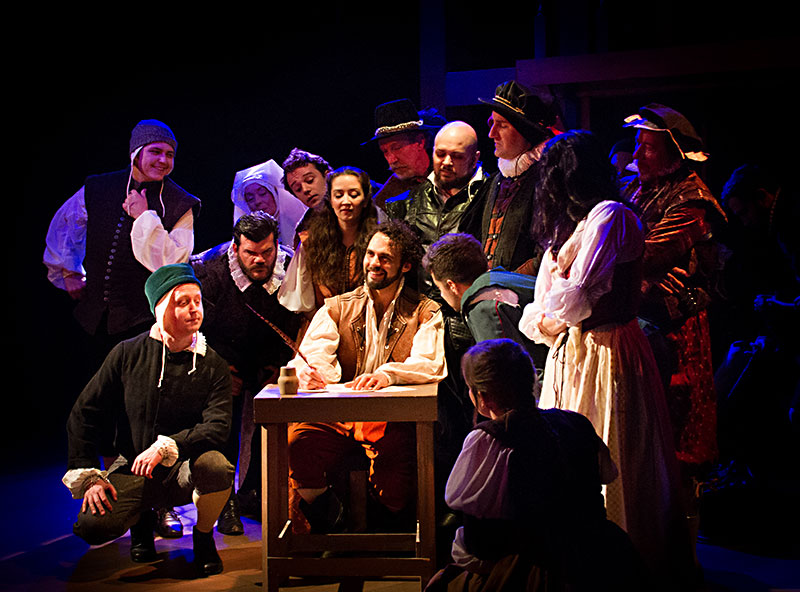 Watching Will work: The cast of Shakespeare in Love (photo by Jess Hughes)

Most established theatre companies in Austin have a distinctive "voice" to their work, and Austin Playhouse is no exception. The source material for its current production, Shakespeare in Love, is, obviously, the screenplay of the same name by Marc Norman and Tom Stoppard, adapted for the stage by Lee Hall. Arguably, Stoppard's hand in that Academy Award-winning film is where it and Austin Playhouse's voice sync up; the company has a history of producing Stoppard, from his original works such as Arcadia, Travesties, and The Real Thing to his adaptation of Chekhov's The Seagull. It's a pairing that has worked quite well in the past and works extraordinarily well in the present.

While the stage version differs from the film in a few key areas – gone is the thread with Shakespeare, Rosaline, and the Master of Revels, for example – it keeps the story mostly intact. It's still the romantic comedy of lovelorn William Shakespeare experiencing in real time his own inspiration for Romeo and Juliet. (Also Twelfth Night, if we get down to it.) Where moments from the film that wouldn't work onstage are eliminated, they're replaced by moments that work as well as, if not better than, their screen counterparts. This version seems even more stuffed with Shakespearean references and Easter eggs than the film, with some jokes specifically for theatre nerds – during the audition scene, for example, an actor is asked for his "contemporary monologue," then launches into Faustus.

Fans of the film who are so familiar with it that they know not only its dialogue but also its rhythm and pacing will find some of the rhythm, pacing, and even line delivery here lifted straight from the film – director Don Toner and assistant director Lara Toner Haddock apparently having subscribed to the precept that if it ain't broke, don't fix it. When this does happen, however, it's not at all objectionable, and otherwise they helm a marvelous cast and crew through a production that is distinctively Austin Playhouse.

Having made his bones throughout the years at Austin Playhouse, Stephen Mercantel proves he can deftly carry a show as the Bard himself, full of all the brashness and bravado you'd expect from Billy Shakes, without channeling Joseph Fiennes. A powerhouse ensemble makes for plenty of stolen scenes, though, and J. Ben Wolfe as Ned Alleyn, leader of the Admiral's Men; Brian Coughlin as Lord Wessex; and Mary Agen Cox as Queen Elizabeth I all dominate any scene in which they're present. Also notable are Huck Huckaby's Fennyman, Bernadette Nason's Nurse, and Jason Newman's Kit Marlowe, who enjoys a rather expanded role in the stage version. And Claire Grasso (as per usual) gives a riveting and memorable performance as Viola de Lesseps, the fiery and ultimately otherwise betrothed love interest of Shakespeare, providing the inspiration for Juliet and, eventually, Viola in Twelfth Night.

The show is clearly meant for a larger space, and it's admirable how the design team has crammed within this wooden "O" the very casques that did affright the air at Aginc ... wait, wrong Shakespeare play, but you understand. Mike Toner's set is intuitively designed, yet simple enough to not crowd the playing space. The gondola scene is handled in a particularly creative way. Mark Novick's lights and Joel Mercado-See's sound design help to forge a perfect Elizabethan environment capped off by Buffy Manners' exquisite costume design. Toby Minor's fight choreography is vivid and vicious, though a bit nerve-racking given the small area in which swords are flashing about.

With so many movies turned into hit musicals in recent years, one might wonder whether that type of success could happen with a straight play. Though Shakespeare in Love's Mr. Fennyman might reply, "I don't know, it's a mystery," this production proves that it can, beyond a shadow of a doubt.