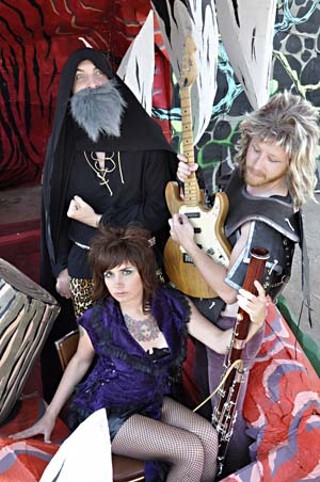 Since the dawn of time, the legend of Arthur, legendary king of Britain, has been told in infinite awesome ways. But until now, never has his saga been told with this much fervency, this much badass-itude, this much hair.

In Arthuriosis, the Getalong Gang Performance Group has ripped the metal off the suits worn by those knights of ancient yore and put it where it truly belongs: in the headbanging music that those medieval warriors made ... or would have made if only they had had access to Flying V guitars, amplifiers, and feedback. As Webber and Rice did to Jesus, authors Spencer Driggers, Michael Federico, Cameron Cobb, and Sam Wagster do to Arthur, making him the superstar of his own rock opera, and the Gang rocks his tale so wickedly hard that you can feel your brain being stripped of IQ points. Literally.

You can tell how seriously the Gang takes this show with the solemn entrance of four hooded monks, who then rip the sleeves off their robes to display bare guns ready to rawk. These four make up the Council of the Beast – i.e., the band – and after doffing their hoods to reveal all four sporting the same long white tresses – like Johnny and Edgar Winter squared! – they lay down screaming power chords over a pounding beat like your head with the worst St. Patty's Day hangover ever. It provides suitable gravitas for this Arthur, a guitar hero whose destiny is to wield the enchanted Ax-calibur.

We hear this from Philip Kreyche's Merlin, with his snowy curls, patented Dumbledore beard, and maniacal squeal like Geddy Lee with a groin pull, but we can already see that Benjamin Wright's Arthur is fated for greatness by the way he tosses his long, curly locks like a proud stallion and squints soberly into the distance like a nearsighted student trying to read the chalkboard without his glasses. He is born to rule Britain, just as he is born to bed Guenevere – a fact made clear as the two lock eyes (and pelvi) with all the throbbing tension and subtlety of expression in a soap opera hookup. Sara Berger's Guenevere looks and acts like Joan Jett and Grace Slick got it on and made a love child – which Arthur actually does here with the sorceress Morgana (a bodaciously wicked Kathleen Fletcher, taking a tab out of the Acid Queen's stash). It's cool, though, as she had tricked him by disguising herself as Guenevere. Still, it happens as the real Guenevere is getting it on with Lancelot. But that's cool, too, as we can't hate Brock England's knight; he's like a noble lion, if a lion could walk on its hind legs and had a mane styled like David Bowie's in Labyrinth.

Arthuriosis feels like what would have happened if Camelot's king had assembled the Round Table with Judas Priest, Iron Maiden, Motörhead, Dokken, and Mötley Crüe. If that doesn't make you get your horns up, what will?