The Rude Mechs' latest pays at times comic, at times touching tribute to the strange craft of acting and its practitioners 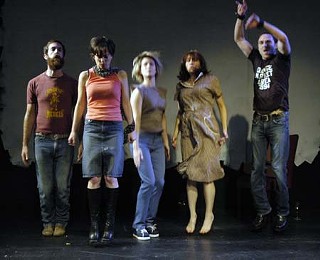 Rollins Studio Theatre at the Long Center, through April 12

She was their mentor, their guide, their guru, the one who was teaching them to be great actors, and now she's gone. She lit out for some godforsaken corner of South America, and they're afraid she's never coming back. Which means they're alone. Alone with a big gaping void where their leader used to be and nothing but one another and this fucking useless play they've been rehearsing for nine years. So what can they do but go on without her, go on and make one last stab at performing their guru's version of A Streetcar Named Desire?

That, in a nutshell, is the situation in The Method Gun, the Rude Mechs' latest theatrical exercise, penned by Kirk Lynn and directed by Shawn Sides. It purports to re-create from the historical record the efforts of five disciples of the mysterious acting coach Stella Burden as they tried in her absence to bring to performance their years-in-development Streetcar – a version in which none of the major characters is represented. No Stanley, no Blanche, no Mitch, and, tellingly, no Stella, just Eunice and Steve and the Mexican flower seller and the boy who collects for The Evening Star and the rest of the hoi polloi peopling Tennessee Williams' French Quarter streets. But as Burden's students talk about what they're going through, the feelings ascribed to Connie Torrey and Koko Bond and Robert "Hops" Gilbert – the desire to be a fantastic actor, the need for faith in what you're doing, the fear of being judged for daring to try something stupid or impossible or embarrassing or honest – could easily be the feelings of the Rudes themselves, or any actors. Within this framework, the Rudes are really paying tribute to this strange craft of acting and its practitioners, who lay themselves bare emotionally and physically, even as they worry that they'll look ridiculous doing so. That anxiety is literalized here in a spectacularly comic sort of dream ballet where cast members Thomas Graves and Jason Liebrecht appear buck naked, each with a colorful bouquet of helium-filled balloons tied to his manhood. As a heavily reverbed version of Cat Stevens' "Moonshadow" plays, the two bounce goofily about the stage like Armstrong and Aldrin on the moon. That, actors will tell you, captures how we feel in our worst moments: totally exposed, vulnerable, absurd.

But that's how we all feel in our worst moments, isn't it, onstage or not? "I have no idea how to act in my life," laments Lana Lesley's Koko at one point, and the line ought to strike a deep chord throughout the house. We all perform; every social interaction we partake in is an acting exercise, and often we feel so inadequate at it, saying the wrong line or the right line the wrong way. We want someone to show us when to speak and how to be convincing and, most of all, how to make the right choices. We want a guru for acting in life. But we rarely get one, and if we do, she leaves before we're ready, and we're left alone. So what can we do but go on without her and try our best?

As The Method Gun progresses, Stella's students show us how they do it, with periodic glimpses of her Streetcar, where minor characters take center stage and the actors fill them with as much life as if they were the leads. A stunt, yes, but it turns out to be revelatory, as these figures, typically seen as less important because they function as supporting characters, acquire stature and depth, forcing us to reconsider the fullness of their humanity. Without a Blanche to be drawn to in the first scene, we focus on Eunice and can see, maybe for the first time, beyond her Big Easy bonhomie to her sense of class, with Shawn Sides nicely shading in Eunice's growing discomfort in Blanche's presence. With the throwaway role of a hot-dog peddler – background atmosphere in Streetcar – Thomas Graves creates a tragic figure, each slow, heavy step and call of "red hots" freighted with bitter disappointment. By investing so much in these figures, the performers – both the Rudes and the actor-characters they play – suggest there are not only no small parts but no small actors.

The "final performance" of Burden's Streetcar features a characteristically Rude-ish blend of physicality and audaciousness, with the actors playing scenes while maneuvering in and around poles that swing across the stage like pendulums. Their actions are so precisely timed, so crisply executed, that watching them slide between these moving rods is almost hypnotic. What they show us, though, is these actors pulling it off without their guru, with their own fierce drive filling the empty space inside them. It's like the talking tiger tells us – did I fail to mention the play has a talking tiger? – what's absent is sometimes more important than what's present. When she's gone, that's when everything begins.