Ars Ipsa's exhibition Temporary Dividers temporarily divides its contents into 'art,' but the ideas of these contents, viruslike, are likely to permanently accompany your life 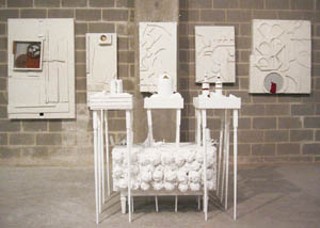 We can begin by considering that art itself is a temporary divider, by thinking of the ways in which art is a distillation, a codification, of the less-fabricated beauties or horrors of our ongoing lives. We continually witness all that is around us, although perhaps we seldom take the time or effort to fully realize the impact imparted, and then we're brought to attention by items or processes set apart from the rest of our complex lives. Set apart, intentionally and temporarily, by a divider called art.

Here we go, into one vast corner of the ground floor of the Computer Science Corporation's Building 2 downtown, temporarily acquired, through the AMLI group, by the Ars Ipsa gallery. You remember AMLI: They housed the "Construction Site" exhibitions earlier this year. You may also know Ars Ipsa and that its gallery is in flux, currently, as it searches for a new space but refuses to stop mounting shows just because it's currently spaceless. So, into the temporarily art-filled room at the corner of Second and San Antonio.

Laura Latimer has done things with mailing tubes and roll-papercores and cardboard shipping cartons and house paint. What's she's done is create complex structures from these mundane items, structures that are reminiscent of (or, in some cases, precisely are) small-scale cityscapes of some potential future. Lit from within their dense centers, sprawling maplike along the room's eastern wall, constructing fractured skylines and micro-inhabitable areas with the materials discarded from actual, full-scale building projects, these works are an evocative iteration of the surrounding caves of urban steel and concrete this temporary gallery is nestled in.

Clif Riley has his finger on the pulse of something, and that something is represented by the posters of thick art paper he's set to pulsing with his well-inked loops and whorls. Sheets of white, sheets of black, covered with the artist's fingerprints to form patterns like Rothko attempting a visualization of Philip Glass' score for Powaqqatsi: black prints on white background, white on black, as starkly elegant as the double helices that imposed patterns on the terminus of Riley's digits in the first place.

Emilio Villarruel has a series of tripods and wall pieces in the gallery's western half, the wall-works like Nevelson knockoffs with a twist, the tripods resembling anti-aircraft weapons that would be at home in Cronenberg's eXistenZ, and all of these objects whitewashed to monochrome, save for rare and startling instances of raw color.

Ted Ollier's Panama Canal is just that: a flat geographical map of the Central American region, rendered in plywood and hardwood, covering a floorspace of 12 feet by 6 feet. One can almost imagine the ecstasy of the jigsaw.

Logan Hill's Efficiency, in the middle of the gallery, is efficient in its depiction of apartment-based solitude, the secondhand furniture arranged to accommodate the viewing of video (a smorgasbord of videotape brands is represented within the bookshelves) and the hearing of albums (the record player's stuck and repeating, endlessly, the final and silent groove off an LP).

Heather Johnson's Virus infiltrates the entire space, its bright lines often indiscernible without close flashlight-enhanced inspection, stealthy among the bold displays and wall fixtures and cracks in the building's concrete beams. Look sharp, though, and you'll find it everywhere: as strands of yarn bunching out from a breach in the gallery's structure, as a single line of thread conforming to the subtle, topological aberration of one otherwise unremarkable wall.

This show temporarily divides its contents into "art," as do all such exhibitions; but the ideas of these contents, viruslike, are likely to permanently accompany your life, reminding you to consider the difference between things and the depictions of things.