pdf
ON THE COVER:
Back to the Trenches
features

'Give' is a four-letter word: part two

Back to the Trenches

Texan activists worry about their abducted colleagues in Iraq

We've heard some of these ideas are even real

Despite being slated for removal by City Council in September, the city may actually build them some new friends

Only a small fraction of families qualify for mortgage assistance

While the international community and some U.S. cities embrace the Kyoto Protocol, the Bush administration resists, in typical assbackwards fashion

No Breakthrough at Cap Metro

Union disputes notion that a deal has almost been reached

The Race Is on for House District 48

Hey, That's Our Nuke, Too

Stop Union-busting, or Take a Hike

The streets are mean, and so is the City Council

Coming up with a timetable for leaving Iraq isn't unpatriotic or cowardly; and Bush's EPA proposes a new rule for testing toxic pesticides on humans, giving pesticide corporations clear-cut exceptions to the supposed federal ban on human testing Fired Up!: More Adventures and Recipes From Hudson's On the Bend

The Driskill Hotel: Stories of Austin's Legendary Hotel – A Cookbook for Special Occasions

A Revolution in Eating: How the Quest for Food Shaped America

More Where That Came From

'Tis the season for birth and rebirth; plus, former Bitter End chef about to step into 'Hell's Kitchen'?

One in a Million

Super mega huge rock stars foreign (Coldplay) and homegrown (Spoon) pay a visit as the Grammys surprise Destiny's Child, Los Lonely Boys, and Norah Jones with nominations. Is this what the big time feels like?

Plus, Wajda's war films, 'The L Word,' Harold Lloyd, and a 'Jurassic' fetish 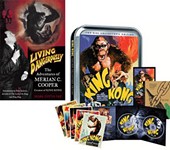 Online commerce puts customers on hold; here's how to get out of the loop

It might look perfect for the Defamer.com-addicted ghoul on your list, but it's really just a coffeetable-safe Hollywood Babylon

Suzanne Quinn, the first and only director of Austin Studios, steps down; plus, news from Slamdance and the Independent Spirit Awards, Avril Lavigne, the Jim Henson Co., and Jerm Pollett

The beautifully wrought film is a tragic love story (not a "gay cowboy movie") that’s defined by its staggering heartbreak.

There's a sweet bent to this simple South African film about a multicultural group of employees at a Cape Town animal shelter who find both goodness and hope in their troubled lives.

This likable romantic comedy runs the gamut of emotions – hitting tenderness, rage, remorse, and everything in between – but there are too many characters with too little chemistry to be a real keeper.

Jackson's remake is a corker of an action/monster movie: part RKO serial; part square-jawed, manly romp; and part classic journey into the unknown that recalls and references Heart of Darkness.
arts & culture

First Night Austin gets ready to ring out the old year in a big way, with a cultural extravaganza on a scale the city has never before seen

Jennifer Bell, who is neither Italian nor Catholic, is one of four artists invited to show her paintings in a memorial exhibit for Pope John Paul II in southeastern Italy

The State Theater Company brings its artistry to bear on that most conventional show of the season, 'A Christmas Carol,' and delivers a perfectly packaged production

From the prologue through the rousing finale, ProArts Collective's new production of 'Black Nativity' saturates the Christmas story in rich emotion

Ballet Austin's 43rd production is what you might call a big-ticket ballet, a sensational show that's all about dreams coming true

Ars Ipsa's exhibition Temporary Dividers temporarily divides its contents into 'art,' but the ideas of these contents, viruslike, are likely to permanently accompany your life
columns

Page Two: For What It's Worth

Scrambling to take care of that Secret Santa on your list? Your Style Avatar has the perfect solution!

Is there a way I can reduce bile production?

Will deferred adjudication show up on my criminal record?

Maryland wins the NCAA Men's championship, the Americans get a tough draw in the 2006 World Cup, and more