The three artists showing here exhibit so much sentience, mystery, and grace 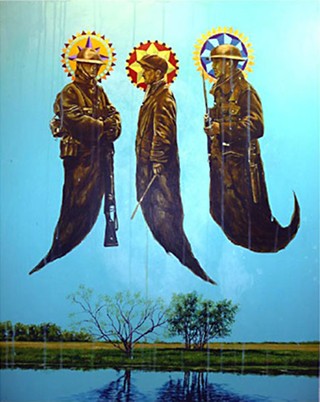 The Unpredictable Past I by John Mulvany


The grayDUCK Gallery is named after the children's game, says owner Jill Schroeder. She means the game that most of us remember as Duck, Duck, Goose, but which in Schroeder's old neighborhood somewhere in Minnesota – and perhaps some alternate universe near one curve of a Calabi-Yau manifold – was called Duck, Duck, Gray Duck.

Yeah, we'd never heard of that either. But then, neither have we seen a duck with three legs, though perhaps one exists, and wouldn't it be more stable than those waddling, feathery, ubiquitous, bipedal ducks?

The grayDUCK Gallery sometimes has three legs to stand on, if you'll follow us across metaphors here, in the sense of featuring three artists at once. That's what "Memento Mori" does: showcases work from Cherie Weaver, John Mulvany, and Suzanne Koett. Of course, even a tripod's integrity depends on the strength of its three supports. Rest assured: The work of each of the artists here is stronger than even the monstrous saber-toothed ducks of prehistoric times.

Koett's large photographs are, the show's catalog says, "an unconventional visual journal depicting what aloneness looks like," showing "what it's like to have a relationship with the self." Now imagine precisely that made manifest in huge, perfectly printed, vivid photographs of young women, often doubled, within mysterious settings of some urban or sylvan demesne – or even in no setting at all. Of the thousand words that each of these pictures is proverbially worth, many of them would be synonyms of: "beautiful," "mysterious," "subtle," and "intriguing."

Mulvany's paintings in oil and acrylic depict a panoply of ghosts in his particular manner, often with the otherwise realistically human phantoms' legs tapering to a single, joined point as they float before deftly rendered landscapes and residences. In this show, the ghosts are of soldiers in full uniform – doughboys, Civil War infantry – fighting personnel dispatched to the afterlife by the sort of weapons now gathering dust in military museums. The eerie is juxtaposed with the familiar, the dead with the living, and fading memories with the world of those likely too young to remember.

Weaver also delves into the past, taking antique photographs from the earliest parts of the 20th century and embellishing them with a fine brush, adding ghostly white loops or geometric encrustations to sepia-tinted great-great-great-grands from the old country. Which is strange and pleasant enough, but then she often goes further and incorporates those modified images into designs she's painted on large canvas or paper, the portraits now sewn into the cloth and surrounded by white lines like the schemata of plant cells stretched and twisted across the backing material, that fabric further enhanced by patches of animal pelt or, say, a decaying postcard stitched into position.