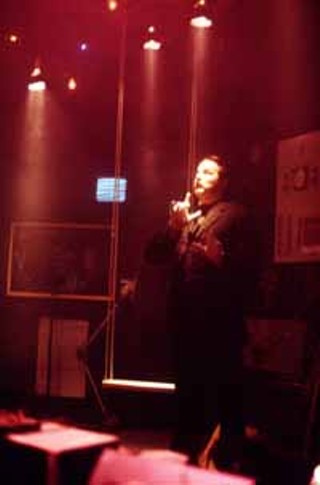 Requiem for Tesla: More Power to Him

I'm having this dream that I'm supposed to critique a talking dog. And I'm aware of the old saw that it doesn't really matter what the dog might say, because the very fact of its speaking is enough, and so what's a critic to do? Also, in the dream, the dog is quoting Foucault and Brecht and Freud and holding forth about its work toward a Unified Field Theory. So I'm feeling a bit daunted, and I start to mention that the dog has incorrectly accented a few syllables, but my clock-radio's alarm goes off and I'm suddenly wrenched into the waking world.

The clock -- and all the other appliances and lights in my house, in fact in most houses everywhere -- runs on alternating current, a method of electrical transmission invented by Nikola Tesla; the radio itself works on technology pioneered by the same man. But we don't learn much, if anything, about this Tesla when we're schoolkids; we learn about Edison and radio-man Marconi. Now, though, local mavericks Rude Mechanicals have plundered biographies and scientific history to set the record straight onstage.

We get the whole story of Nikola Tesla -- at least as much as an hour can hold -- from the man himself, as abetted by such luminaries of the past as Mark Twain, George Westinghouse, J. P. Morgan, and that adversarial weasel Edison. We get a Stephen Pruitt-designed set covering almost half the vast Off Center space with apparatus-festooned levels, complex and unnervingly choreographed lights by Zach Murphy, arresting video by Michael Mergen, beautiful period costumes by Leslie Bonnell, a soundscape by Buzz Moran worthy of the best RKO Radio Pictures, and an original score by Graham Reynolds performed live, on theremin, by Blair Bovbjerg. We get strange dance numbers that seem powered by electro-stimulation. We get a set that literally crackles with current and a working Tesla coil the size of a pygmy hippo.

Michael Miller bears the greatest weight as Tesla, and he does an excellent job portraying the obsessive, visionary inventor; his performance is supported by Michael Kranes, Lana Lesley, Barry Miller, and Sarah Richardson in smaller roles, and by Robert S. Fisher as both Twain and Edison. (As both Twain and Edison simultaneously, to be precise. Visually, I mean: The actor is split down the middle, his left half vividly costumed and made-up as Twain, his right half as Edison; Fisher's Twain, moving like the animatronic Disneyland version, is especially satisfying.)

The show was conceived and directed by Shawn Sides, with a script by Kirk Lynn. Here, as in their earlier Lipstick Traces, they've dragged history kicking and screaming into their talented parlor and made it kick and scream the way they want it to: informatively, fascinatingly, unforgettably. Sides has so many different gears interlocking to create this artful machine that it's a wonder they mis-mesh so infrequently (the pace seeming off just once or twice near the middle). Lynn's script is an impressive, cleverly woven fabric of monologue, dialogue, and sound bites until the final scene; then the writing -- Tesla's deathbed fears about his long-dead brother -- is simply, heartbreakingly gorgeous.

So, yes, the story might have provided greater illumination -- 1,000 and five lumens instead of just 1,000 -- if less scope had been attempted, or if Mr. Twain, say, had been used to clarify a few more narrative points. But, listen, the dog in my dream was expounding at length on quantum physics. And this terrific show is no dog at all.