In Zach Theatre's staging of this epic political drama about LBJ, the fight for civil rights feels particularly urgent

"Is this America?" asks the woman, her voice ablaze with disbelief and outrage. She's just described her arrest, imprisonment in a county jail, and beating at the behest of a state highway patrolman – who ordered two prisoners to batter her with a blackjack as she lay face down on a bunk – all because she sought to register African-American citizens to vote in Mississippi. "Is this America, the land of the free and the home of the brave, where our lives be threatened daily because we want to live as decent human beings in America?" Though asked from the remove of a half-century – during testimony given by civil rights activist Fannie Lou Hamer to the Credentials Committee at the 1964 Democratic National Convention – the question still scalds, in part because of the righteous fire in actor Michelle Alexander, but also because we recognize in it our nation's brutal, shameful treatment of black lives, throughout history and even to this day.

That gulf between this land's ideals and its realities is the foundation of Robert Schenkkan's Tony Award-winning All the Way, its truth underscored graphically in Zach Theatre's production by the massive mural backing Cliff Simon's set: the iconic image of the signing of the Declaration of Independence, emblazoned with the phrase "All men are created equal" and flanked by portraits of men, women, and children who, because their skin is not the same shade as the Founders', weren't – and aren't – treated equally. That mural looms insistently over the action, much as Lyndon Johnson does over the politicos from whom he wants something, and there's no escaping the message. So as the play exposes us to many of the trials faced by blacks in the early Sixties, especially in the South, we feel keenly the desperate need for remedy. Indeed, the hallmark of this staging by Artistic Director Dave Steakley, what seizes the heart and lingers in the mind, is its urgency regarding justice for African-Americans. That is a testament both to the actors here portraying leaders of the Movement – they imbue passionate debates over strategies and protest tactics with grave consequence, so that we sense life and death riding on every outcome – and how close to the bone the script cuts to what's happening in our country right now. "I'm sick and tired of going to funerals for black men who have been murdered by white men," shouts a young man played by Delanté G. Keys, and in his voice is all the pain, frustration, and fury of Miami, of Ferguson, of Staten Island, North Charleston, Baltimore.

With this sense of inequality and injustice so present in us, we're deeply invested in LBJ's labors during his first year in the White House to use his power as president to enact meaningful reforms. Schenkkan has built this epic political drama on Johnson's efforts to pass the Civil Rights Act of 1964 and given it the sweep and intensity of a Shakespearean history, with Johnson as driven, cunning, and tragically flawed as any ruler penned by the Bard. Indeed, Schenkkan's LBJ is so robust a figure that All the Way can work purely as a character study, the portrait of a politician who, having spent his career in a relentless pursuit of power, finally reaches its ultimate seat and must decide what to do. In Steve Vinovich, Steakley has landed a skilled and winning actor to embody the 36th President. He has the look of LBJ, though that won't carry you far in such a demanding role; it's far more crucial that the actor has Johnson's history in his bones – the poverty of his Central Texas youth, the experience of teaching poor Mexican kids in Cotulla, the years of arm-twisting and backstabbing in the U.S. Senate, the profound need for approval – and that Vinovich has. He shows a Lone Star native's love of a good yarn and a good fight in this sly smile that he flashes both when he's unspooling a dirty joke and when his LBJ has somebody by the balls. It's a smile that says he loves knowing where the bodies are buried and employing that knowledge for his own ends.

But as intriguing and complicated as LBJ is in Vinovich's hands, this production of All the Way isn't just his story. It's those ends of his we keep coming back to: equal rights enshrined in law, as fervently espoused by Fannie Lou Hamer and Martin Luther King Jr. (Melvin Abston, commanding yet vulnerable), Roy Wilkins (a piercingly pragmatic William Earl Ray) and Stokely Carmichael (a fierce J. Quinton Johnson). The path to it is paved in battles, betrayals, and backroom deals, and it's as compelling to see re-created here as the process itself is ugly. So, is this America? In the end, we must acknowledge that it is, a land that falls disgracefully short of our national aspirations. But All the Way shows us that if we're that America, we are also the America where progress is possible – if we can stomach the blood that comes with birthing it. 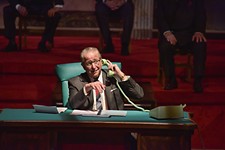 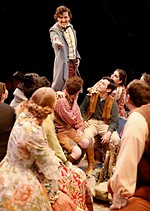 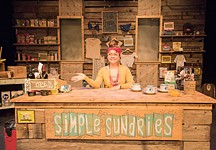