My Obsession: Time Travel in Movies

Falling down the wormhole of chronophysics in film 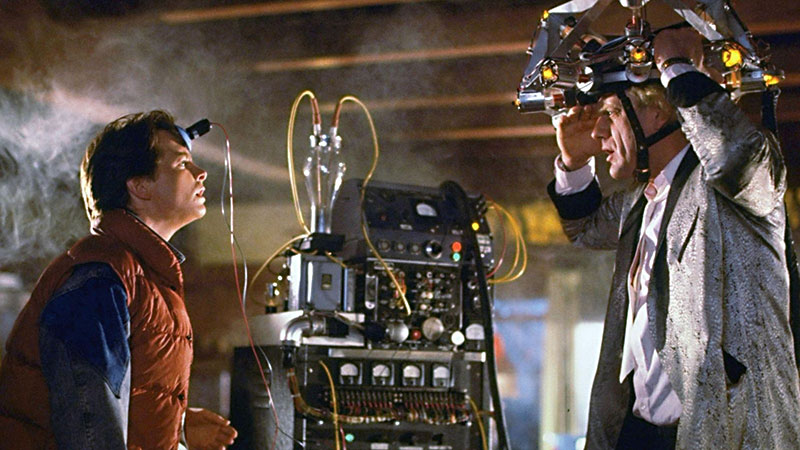 Marty! You must not forget the grandfather paradox when you go through with this whole date-your-mom thing!

The flapping wings of a butterfly can cause a hurricane on the other side of the world, or so goes the official definition of the "butterfly effect." To me, however, it will always refer to the crushed butterfly on the boot of a time-traveling hunter in Ray Bradbury's "A Sound of Thunder," which in elementary school sent me down the rabbit hole of time travel theory. In the story, a man goes back in time to shoot a doomed-to-die-anyway dinosaur but accidentally steps off the path, killing a butterfly and irreparably changing the future.

Bradbury's hunter has the unfortunate distinction of living in a Contingent Universe, in which any change to the past made by the time traveler overwrites the original and replaces it with a freshly generated new version. In Back to the Future, when Marty McFly ends up in 1955, Doc Brown tells him if he is not careful, he will erase his own existence. This is often known as the "grandfather paradox," i.e., going back in time and killing your grandfather prevents your own birth. Another version is the "Hitler murder" paradox – if you go back in time and successfully kill Hitler, foiling the Holocaust, you undercut any need to go back in time to kill Hitler.

The Contingent Universe is only one example of chronophysics, a subject taught nowhere but in the stories and screenplays of science fiction. In contrast, the Divergent Universe, or Branch Theory, creates a new universe/timeline every time a change is made. In the original Planet of the Apes franchise, when Cornelius and Zira head back in time in Escape From the Planet of the Apes they start a new timeline. Their child will start a revolution in a future very different than the past Cornelius described in the original film.

The Elastic Universe "snaps back," so even if a time traveler makes changes, the Universe tends to self-correct and eventually the outcome looks very similar to the pre-time travel version. Peggy Sue Got Married finds Kathleen Turner traveling back 25 years and changing very little, despite her intentions. Hulu's 11.22.63 features a modified Elastic Universe; as James Franco tries to prevent the JFK assassination, the past conspires against him.

Finally, the Closed Loop or Deterministic Universe basically makes the time traveler powerless (or all-powerful, depending on how you view it). Any change the time traveler makes to the past is a change they were always going to make, or already made. There is one, immutable version of history. In The Time Traveler's Wife, Eric Bana meets Rachel McAdams who is already in love with him because she has met his older version several times in the past when she was younger. He then does exactly that, giving a younger version of Rachel the dates he will arrive out of the older Rachel's diary.

Take any of those films and transplant them under a different set of chronophysics and everything changes. Closed Loop Marty had always taken his mom to prom, Contingent Cornelius disappears as soon as he escapes from his planet, Divergent Peggy Sue undoes her own marriage, and Elastic Eric Bana dies in the first minute of the film. Fun, right? And we haven't even added doppelgänger variations into the mix and discussed the six Aarons in Primer.

Bears Fonté is the founder and artistic director of Other Worlds Austin, the area’s only dedicated science-fiction film festival.

Time TravelOther Worlds Austin, Back to the Future, Planet of the Apes, Primer, The Time Traveler's Wife, A Sound of Thunder, Peggy Sue Got Married